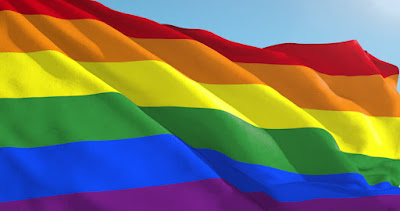 June is designated as "Pride Month." This is a story I've wanted to tell for a while.

High school is a brutal period in most people's lives and memories. I went to high school in the late 1970s. I hated high school and I attended as little as possible. For me, this was a fairly easy task, since there were 1100 students in my class alone, making an overall student body quadruple that number. So, blending in as a faceless entity was not difficult. I cut a lot of classes to avoid interaction with fellow students or I hung out in an art class when I should have been learning calculus or doing chin-ups. (A cool student teacher, just a few years older than I was, offered me sanctuary in her classroom and covered my actions with convincing excuses to the other teachers.)

With over 4000 teenagers packing the halls and classrooms, nearly everyone was subject to judgement and ridicule and bullying at one time or another. Unfortunately, it was a time when this common behavior was not addressed with any sort of disciplinary action. It was usually dismissed by those in authority as "kids will be kids" — if it was addressed at all. I had a few "run-ins" with some guys who, I suppose,  got some sort of thrill threatening a skinny, pacifistic artist they knew wouldn't fight back. I was shoved a few times and, of course, several antisemitic slurs were levied at me, because that always makes for good "bully" ammunition. I did my best to avoid my infrequent tormentors and, eventually, they moved on to someone else (or maybe they were finally expelled).

If I was being picked on for being a free-spirit and just a little "out of step" with the "norm," I could just imagine the wrath that any of my gay classmates suffered — not that I really knew anyone who was gay. I'm sure there were gay students in my class. There had to be. It's just statistics. I just didn't know which ones were gay. I suppose they had to remain closeted because.... well, it was high school in the 70s. Calling someone "gay" when I was in high school was an insult of a pretty high level. In hindsight, that was horrible, just horrible. So, that added unnecessarily to the oppression that any gay student already endured. When I said 'I could just imagine the wrath any gay classmate suffered,' I really can't. How could I? But it must have been.... well, horrible. I can only understand that now.

In the 1990s, I was working at as a layout artist at a composition house, something that really doesn't exist any more. I did layout for a bunch of newspapers (something else that barely exists any more) that served small local communities, colleges and a few special interest groups. One of those newspapers was Au Courant, an independent weekly publication with a fairly large circulation in the Philadelphia gay community. The small contingency that formed the staff at Au Courant had broken away from the mighty Philadelphia Gay News over editorial disagreements and started their own tabloid, which was scrappier and hipper than PGN. Every Monday morning, I would lay out the composition boards for the anticipated 32-page issue of Au Courant and soon, I would join my fellow artists in assembling the weekly issue in a "cut-and-paste" method. (Now you know where the "cut" and "paste" commands in various computer programs originate. TMYK.) The entire editorial and advertising staff of Au Courant would file in to the office (Don't be impressed. That only amounted to four or five guys. It was a small paper.) and offer direction for placement of articles and ads.

I have to admit, I was a little leery of these guys, at first. They casually discussed detailed aspects of a lifestyle of which I was totally unfamiliar. It was the first time I had every met anyone who openly and happily acknowledged that they were gay. Initially, it made me uncomfortable, but I also must admit that I was surprised by how normal they were. (In hindsight, that sounds really stupid and narrow-minded.) As the time at this job went on, the more interaction I had with the staff of Au Coutrant, the more I looked forward to Mondays. For the most part, they were a bunch of really nice guys — close to my own age — and I had a lot in common with them. While we worked, we enjoyed lively conversation about movies, music and current events. There was one guy, however, who was a total jerk. That was Michael and Michael was the editor-in chief of the paper. He didn't come to the office often, choosing to leave the composition to his assistant editor who was a smart and funny guy. But when he did come in, he was angry and demanding, barking orders at his staff and belittling those who didn't heed his call on the first bellow.

It was then that it hit me. Why on earth would anyone dislike someone just because they were gay? It made no sense.... just like any prejudice makes no sense. Gay people are just people. Some are nice and some are jerks. As a self-proclaimed misanthrope, I know there are zillions of reasons to dislike someone long before "gay" makes the list. Michael was an absolute asshole. Conversely, Harry, the head of advertising sales, was a nice guy. A really nice guy. The fact that they were gay had absolutely no bearing or relevance to the types of personality traits they exhibited. They were just like everyone else. (There I go again. You know what I mean.)

After a year or so, Michael's visits became less and less frequent. When he did show up, he looked gaunt and weak and he remained seated most of the time. His voice was hoarse and it appeared to be an effort to speak. His boyfriend Joe, a nice, relatively quiet guy, led Michael around when he was asked. The most ubiquitous tool used in the newspaper composition business was an X-Acto knife. I used one at every one of my early, pre-computer jobs. I became deftly accurate at slicing up "galleys," another job skill that is now obsolete. On one of his last appearances in our office, Michael announced that he was not permitted to handle or be in proximity of an X-Acto knife. Shortly after, the Au Courant staff shared whispered conversations about AIDS. Shortly after that, we were informed that Michael had passed away. I surprised myself by how I felt. I was crushed. Michael was the first person around my own age that I knew that died. Dying was for old people, not for 35-year-olds. I didn't like Michael. Not because he was gay, but because he wasn't a nice person. I did, however, make a donation to MANNA (Metropolitan Area Neighborhood Nutrition Alliance, a volunteer organization that brings meals to those in the Philadelphia area that are battling AIDS) in Michael's honor. I have made yearly donations (when I can) ever since.

I eventually left the composition house and moved on to my first job where I didn't use an X-Acto knife. A few nights a week, I also helped my wife with her blossoming eBay business. One evening, I was wrapping some glassware with old newspapers that we had accumulated. I grabbed the top sheet of the pile as I carefully lifted a fragile Depression glass sugar bowl with my other hand. I'm lucky I didn't drop the piece, as I was startled by a headline I saw in the several-weeks-old newspaper. It was in the "Obituary" section of a recent Philadelphia Inquirer. There was a black and white photograph of Harry, the advertising sales guy from Au Courant, accompanying a three-paragraph synopsis of his brief life. I scanned the story. It highlighted his education and his career, noting, most recently, he was employed in the sales department of the Inquirer itself. What was missing from the story was a life-defining incident that Harry had told me one day.

Harry spent a good portion of his life trying to live up to his father's expectations. His father, he explained, was a Camden, New Jersey police officer — a tough motorcycle cop, as a matter of fact. Harry did his very best to suppress his homosexual feelings, so — as he put it — as not to embarrass his father in front of his cop friends. Harry went to his senior prom with a girl from his class. After high school, he married a woman in an attempt to make his father proud. A little over a year into his marriage, Harry's wife returned home unexpectedly early from a day of running errands. She discovered Harry in their bed with a man. Harry told me the feeling of "getting caught" after so many years of acting the way he was "supposed" to act was liberating. Harry and his wife divorced. Harry became estranged from his father (however, they reconciled just prior to his father's death). But, Harry was finally living the life he wanted to live. His life. His way. It's just sad that he was only able to enjoy that life for only a dozen or so years. That story should have been the inspirational lede to Harry's obit.

My interaction with the guys from Au Courant taught me a valuable lesson and it changed my outlook for the rest of my life. Sure, there are plenty of people that I dislike. I don't deny that and I don't think I will ever stop disliking someone. But, I have reasons for my animosity. It is based on things they have said and actions they have taken against me personally. I never, ever have contempt for someone for what they believe in or how they look or who they love (unless they love The Dave Matthews Band. I have no tolerance for that!).

Don't be stupid. Just be who you are. Let others be who they are.

www.joshpincusiscrying.com
Posted by josh pincus is crying at 7:32 AM