who's got a big red cherry nose? Last night, my son and I stopped for dinner at National Mechanics an hour or so before heading to a concert. National Mechanics is a restaurant and bar in the Old City section of Philadelphia, and one of my son's favorite haunts.

We came inside out of the cold December evening and were greeted by a dark-haired young lady who grabbed a couple of laminated menus and directed us to a table toward the rear of the dining area adjacent to the bar, lively with Happy Hour patrons. As we each perused our menus, a waitress, whom my son knew, politely introduced herself and took our drink orders. She returned with the two glasses and accepted our dinner requests.

My son and I talked as we waited for our meals. I regularly interrupted his train of thought to have him identify various songs playing on the slightly-too-loud piped-in music.

At a point in our conversation, I was distracted by something in my peripheral vision. The dark-haired hostess was having words with a man near the bar. The man, whose back was to me, was wearing an ill-fitting Santa Claus suit. Although they were less than two feet from where I sat, I could not hear their exchange over the ambient music. From the stern expression on the hostess' face, it was apparent she was not pleased. Her jaw worked and her brow knitted as she made her point. The Santa man listened silently and rocked slightly from side to side. Finally, he dropped his shoulders and staggered toward the the door. The hostess, with arms defiantly folded across her chest, watched to confim his exit. As she made her way back to her post by the front door, I tapped her shoulder when she passed within reach.

"Did you just throw Santa out of here?", I asked.

"Santa was in here earlier.," she replied, "He's had enough."
Posted by josh pincus is crying at 1:08 PM No comments:

I have spent nearly five years expanding my blog with observances of the quirkiness of my surroundings, chronicling the deaths of those once celebrated and now forgotten, stories from my past and, of course, my silly drawings. In that time, I presented my views on religion, both my own and those of which I am not a follower. Because I have often been questioned as the peer-appointed spokesman of the Jewish faith, I have tried to detail the unusual customs and rituals associated with being a member of “The Chosen People”. Well, it’s time for Josh Pincus to come clean.

I grew up in a Jewish household. To me, that meant we didn’t drag a tree into our living room every December, we didn’t dress up in our finest clothes on a late Sunday in April, and we didn’t believe that Jesus was Our Savior… whatever that meant. (Who thought, at six years old, I needed saving?) Despite the majority of my classmates also being Jewish, we weren't denied participation in Christmas card and gift exchanges at school and dyeing Easter eggs every spring. It also didn’t stop me from enjoying another practice associated with my communion wafer-munching friends — the visit to Santa Claus.

I have vivid memories of accompanying my Mom to one of several large department stores in the pre-mall days of the 1960s. The store’s toy department was jammed with all the latest offerings to fulfill a child’s appetite whetted by Saturday morning commercials and the thick Sears Wish Book. Just past the aisles of colorful playthings was an area gaily decorated with twinkling lights and pine garland and speckled with oversized red velvet bows and piles of fake snow. In the center sat a raised platform covered with more fake snow surrounding a great throne on which sat the seasonal fat man himself. Several holly-decked pylons connected by candy-striped rope designated a queue line. Excited children chatted and fidgeted as they waited their turn to greet St. Nick and impart their requests for gifts.
My mom directed me to join the line while she made arrangements with the “elves” operating the huge tripod-supported camera for a photographic record of my encounter with Santa. (Although I’m sure he did, I don’t recall my older brother joining us for these yearly excursions. Obviously, he got wise to this scam at an earlier age than I did.) I patently waited for my chance to tell Santa what I wanted. I knew that we didn’t celebrate Christmas, didn’t have a Christmas tree and especially didn’t have a chimney or fireplace, but I never made the connection. All I knew was: if you wanted presents, this was the guy to ask. A smiling little girl in white tights and a plaid coat climbed down from Santa’s lap and happiliy skipped away. A college-age young lady in full elf uniform waved me in. My moment in the spotlight had arrived. My mom stood by the platform’s exit ramp and beamed. I’d fix that in a few minutes.

The kind-faced Santa looked down at me perched on his red-flocked lap and asked if I had been good this year. My six-year old mind assessed the question. As if any six-year old would fess up, I answered that I not only had I been good, I'd been very good. Then, he asked the most important question, the one I was preparing for. “What would you like for Christmas?”, he smiled. I wrinkled my brow at the “Christmas” reference. Then, I raised my head proudly, cleared my little throat and replied.

“My very own roll of Scotch tape.”

Santa stared, perplexed. “What?” he asked in a puzzled tone. “I want my very own roll of Scotch tape.”, I repeated. (Okay, I thought, the guy’s old. Maybe he didn’t catch me on the first go-round.) Santa looked over my shoulder at my mother. My mother frantically looked around for a place to hide. She glanced back at Santa with a “that-is-not-my-kid-on-your-lap” look on her face. Santa looked at me again and saw the “I-am-not-shittin'-around” look on my face. With disbelief, he stammered as he echoed my request.

“A roll of Scotch tape?”

“Nothing else?”, he asked, somewhat hopeful.

I stared back at Santa with my own disbelief. “Nope” I said. Why on earth would I want anything else, I thought. I’m talking Scotch tape, my chubby friend! Do you have any idea how much fun I could have with my very own roll of Scotch tape?

The bewildered Santa smiled, nodded, handed me a candy cane and sent me on my way. I joined my mom who was busily trying to hide her embarrassment from the other mothers. “Did you just ask Santa for a roll of Scotch tape?”, she asked.

Mission accomplished, we continued walking through the store. 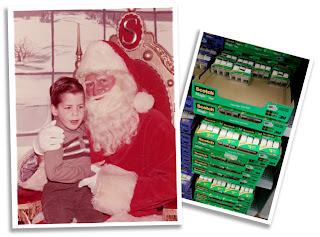 Posted by josh pincus is crying at 1:07 PM No comments: