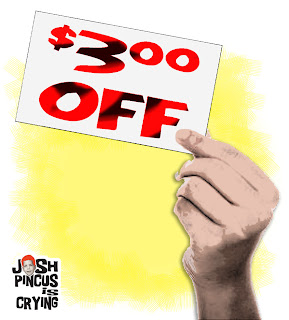 My wife was at a supermarket to pick up a few things for an upcoming soiree at our house. It was not the market at which we regularly shop. She filled her cart as she strolled up and down each aisle until her shopping list was completed. Then, she wheeled her cart to the checkout area and began loading up the conveyor belt with her potential purchases. Based on the grand total of her purchases, the cashier handed Mrs. P a coupon for a few dollars off her next shopping order. My wife looked at the overflowing bags, jam-packed with items she would probably never buy again, in quantities she would never consider again. She thought about the distance from our house and concluded that it would be quite some time until she would pay this store a visit. She looked at the coupon in her hand and frowned.

Now, let me explain something.

My wife is the nicest human being that has ever graced this God-forsaken shit-hole we call "Earth." First of all, she has been married to me for nearly thirty years, so that's saying something. Secondly, she is genuinely concerned about other people. Imagine that! Concern for other people?! She is helpful and she always tries to do the right thing. When she asks "How are you?," she really means it. When she asks "Is there anything I can can do?," she really wants to help.

So, there she was, in the supermarket, with a coupon in her hand that she will never use. She turned around to see a woman in line behind her, surveying the contents of her own shopping cart.

"Hi!," Mrs. P addressed the woman, cheerfully, "Here's a coupon for three dollars off your entire purchase. I can't use it." She reached over the other woman's groceries and waved the voucher in her face.

"Huh?," the woman answered, no expression on her face.

Still smiling, my wife repeated, "I won't be back at this store anytime soon to use this coupon, so you can have it. It's for three dollars off."

"Okay.," the woman said. She was motionless, except for the slow extension of her arm to retrieve the coupon. And then she added "What?," as though not fully understanding that she was on the receiving end of a gesture of kindness towards a fellow human.

"I am giving you a coupon for three dollars off your shopping total today!," Mrs. P enunciated each syllable as though she was speaking to a child and she was getting the teeniest bit agitated. She was practically forcing the coupon on this woman.

"Okay, I guess.," the woman answered and hesitantly took the coupon out of my wife's hand. Then, she looked down and continued contemplating the products that were stuffed into her cart.

The cashier shook her head and rolled her eyes in disgust. The woman, however, was oblivious.

Posted by josh pincus is crying at 3:02 PM No comments: