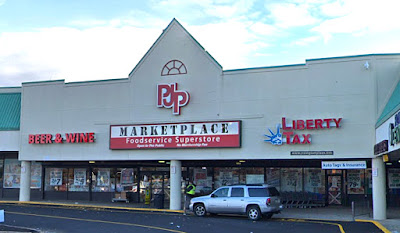 I'm gonna try to write this without editorializing. I will try to just report the events that happened without commentary. My goal is to allow you — the reader — to draw your own conclusion. This may be difficult, but I will do my best.

My wife and her father recently went to pick up a few things at a store called PJP Marketplace, a branch of which is not too far from our home. According to their website, PJP Marketplace is a local chain of "open to the public" stores that "stocks everything you need to run your foodservice establishment." They sell a wide variety of kitchen-y things from fresh and frozen food to utensils and serving pieces all the way up to commercial scales and equipment. Mrs. P and her father were looking for a large quantity of plastic quart containers in which to store the unnecessarily voluminous amounts of soup that my mother-in-law prepares for the upcoming Passover holiday. (Oops! I think I just editorialized. I'll try to watch myself.) They were also looking to buy similarly packaged disposable foil pans for the same aforementioned (and again questionable) purpose (Ugh! There I go again!)

This particular PJP Marketplace is located in a predominately Hispanic neighborhood just over the suburban boundary of Philadelphia. Most — if not all — of the clientele and employees are Hispanic. That is not an observation. That is a fact. My wife and my father-in-law are both Caucasian. That is also a fact.

After finding a parking spot, they grabbed a shopping cart and entered the store. They made their selections and filled their cart, then headed towards the checkout area near the front of the store. They got into one of the many checkout queues, all of which were surprisingly lengthy. A cashier was setting up behind one of the currently-closed lanes, obviously preparing to open up and relieve some of the congestion. When she finished reconciling the money in her cash register's till, she looked up and scanned the long lines, seemingly perusing her choices for who would be her first customer. She pointed to a man in line behind my wife and father-in-law. He was Hispanic. She motioned the man forward, despite the fact that my wife and father-in-law were next in line. She appeared to look right past — or through — them. (Hmmmm.... that may be borderline editorializing. Strike that from the record, please.) The man walked around my wife and father-in-law and was the first customer in the new checkout line. Mrs. P and her father waited patiently in their own line and, within less than a minute, they were placing their items on the conveyor belt for purchase.

After making payment, they gathered up their bagged purchases and made their way to the exit. At the exit, however, a man was stopping each and every customer to carefully and thoroughly check each and every receipt. The man took each receipt and, with a yellow highlighter pen, checked off each item on the paper once he identified it to be paid and in the customer's possession. He also appeared to be giving each customer an accusatory "once over."  When Mrs. P and her father came up to the man with their bag and receipt ready to be reviewed, he smiled and waved them on. "You folks can go ahead." he said, without even taking the receipt from my wife's hand.

That's it. That's my story. Draw your own conclusion.

www.joshpincusiscrying.com
Posted by josh pincus is crying at 7:40 AM