say your piece and get out 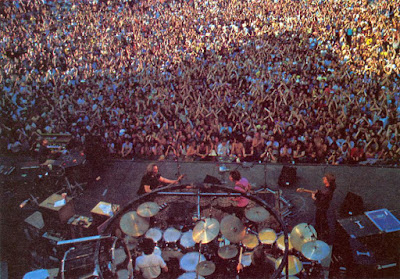 "This post ain't gonna make some people too happy." – JPiC

Considering I am very familiar with their musical catalog, seen them over a dozen times and can name every member of the band – past and present – I would not really consider myself a fan of the Grateful Dead. My wife, however, is a fan. A true fan. A longtime fan. Based on that, I suppose my status could be best summed up as "DeadHead-in-law."

When I was in my record collecting heyday back in high school, I would often be found perusing the "cut-out" bins at the supermarket-sized Peaches Records, a now-defunct retailer near my Northeast Philadelphia home. "Cut Outs," for the uninformed, were records that had been dropped from the label's regular catalog for lagging sales. Their sleeves were punched with a hole or sometimes the cover of the jacket was clipped or notched to prevent the retailers from returning them to the label for reimbursement. These records were sold at a deep discount. I discovered some great finds in the cut-out bins, like the prog-rock classics Fox Trot and Nursery Cryme by Genesis, Tales of Mystery and Imagination, the debut effort by The Alan Parsons Project, Lodger, the final release in David Bowie's Berlin trilogy and Steal Your Face, a live recording by the Grateful Dead and the final release on Grateful Dead Records. I was not familiar with the majority of the Grateful Dead's musical output at the time, but I noticed that Side Three boasted "U.S. Blues" and I remembered that song from The Grateful Dead Movie, which I saw at a midnight showing that I'm still not sure why I attended. So, I bought the album for a mere four dollars, if I remember correctly. I took it home, listened it to once all the way through, listened to "U.S. Blues" a few more times and never played it again. It was boring, filled with seemingly endless meandering guitar sections and an aimless drum solo. At the time of this purchase, I was a fan of Jethro Tull, Pink Floyd, Queen and other popular "big rock bands." No one I knew was a fan of the Dead, save for a few older cousins who would follow the band to every performance across the country and were often the brunt of whispered disapproval by aunts and uncles. After one album, my Grateful Dead experience was quickly over, as I soon discovered the punk rock and new wave trends that were infiltrating modern music, leaving no room for 60s relics.... like the Grateful Dead.

In early 1982, a young lady came into the restaurant when I worked to earn art school tuition money. Little did I know, that – in two year's time – she would be my wife. Now, she was just a pretty girl with long hair that thought I was the most obnoxious person she ever met. (She actually told me that.) Well, after some lengthy "getting to know each other" time, we began dating. Future Mrs. P and I went to the movies and to dinner for the first month or so of our budding relationship. As nicer weather approached, so did the annual Grateful Dead Spring tour. I was not aware of such a perennial event, but to the DeadHead community, you could set your bong by it. My future spouse bought tickets to both shows scheduled for the Philadelphia Spectrum, one of which I would be attending – whether I liked it or not. I would be seeing my soon-to-be wife in her natural element.

The night of the show, we found our seats at the venue. I had been to the Spectrum – the preeminent concert facility in the city, that also served as the home of the Philadelphia Flyers and 76ers – many times before. The place was big and cavernous and more suited to hockey games than concerts. In previous visits, I had never been subjected to a crowd like the crowd at a Grateful Dead concert. The seats were packed with tie-dye clad throwbacks to a time that had – as far as I knew – become extinct decades ago. There were guys with beards like unkempt bird's nests tripping over their own feet as they staggered down the aisles. Young women in long batiked dresses, obviously heeding Scott McKenzie's plea of "be sure to wear flowers in your hair," despite the fact that we were on the opposite coast from San Francisco, swirled and twirled to music only heard in their own ears. The future Mrs. P introduced me to my future brother-in-law. He fit right in with his wild auburn hair, untrimmed beard and colorful T-shirt. The lights soon dimmed. The crowd roared and, after a minute or two of tuning, the band launched into "Jack Straw," their opening song. As the show progressed, I asked future Mrs. P the titles of the songs, since I was unfamiliar with the Grateful Dead canon. She was accommodating, whispering the titles to me so as not to disturb her fellow devotees. Twenty-five minutes later, I asked the name of the song the band was currently playing. Future Mrs. P leaned in and said "Same song." I gulped.

As the years went on, I went to many more Grateful Dead shows, including one where the same guy fell on my lap four times until my brother-in-law literally tossed him down the aisle. There was one where Mrs. P and I sat in seats behind the stage and noticed – halfway through the performance – that the entire section next to ours was asleep. I even saw a few Jerry Garcia solo shows, which were no great departure from a Dead show, right down to the song selection and audience members. Although I saw my fair share of Dead concerts, I still never became a fan. I didn't hate the band, they just never occupied a special place in my heart the way other bands did.

Jerry Garcia, the iconic leader of the Grateful Dead, passed away in 1995, leading most fans to believe that this signified the end of the "golden road" for the band. Sure, they had gone through several keyboardists (as famously parodied in This Is Spinal Tap), but the loss of Jerry had to be the death knell for the Grateful Dead.

A three-year hiatus of uncertainty yielded something called "The Other Ones," a reforming of the surviving members of the Grateful Dead doing what they do best – performing Grateful Dead songs. This assemblage morphed into "The Dead," which begat "Furthur." In spite of a grandiose "farewell" tour in 2015, the current incarnation of what was once "The Grateful Dead" still tours and performs regularly as "Dead & Company," comprised of aging original members and supplemental younger blood. Former bass player Phil Lesh tours independently from his one-time band mates, but has no problem including the same songs on his set list.

Although I am not a fan, I recognize this as a poignant epilogue to The Grateful Dead story. Once mighty in their stature as a pioneering, influential and respected contributor to the history of rock music, they have evolved into a cover band – sadly covering themselves.

Honestly, what else are they supposed to do? Although most of the faithful don't seem to mind.

www.joshpincusiscrying.com
Posted by josh pincus is crying at 8:17 AM