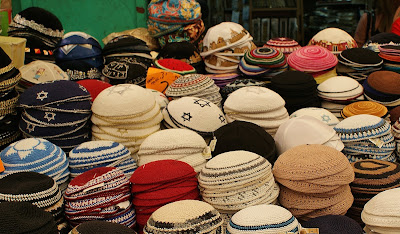 I met the future Mrs. Pincus in February 1982 and we were engaged to be married before that year was finished. I was attending art school and our plan was to get married after I graduated. There were a couple of years until that happened, so we had plenty of time to make arrangements for the big event. Future Mrs. P made all sorts of plans on her own, as well as with my soon-to-be in-laws.

One of the more interesting parts of planning a Jewish wedding is the purchase of custom head coverings (yarmulkes or kippot as they are alternately called) for the male guests to don at the ceremony. As a show of reverence to the deity above, men are expected to cover their heads in synagogue. Since our wedding ceremony would take place in a synagogue, the tradition is to supply head coverings. The yarmulkes are customarily kept as a souvenir and thus, inscribed on the inside with name of the bride and groom and date of the blessed event. I remember when my parents ordered blue satin yarmulkes for my brother's bar mitzvah. They just checked a box on an order form along with "paper napkins" and "cigarette holders" and "match books." (Yes, there were complimentary cigarettes at each table at my brother's bar mitzvah. "Today I am a Man," indeed!) But when it came time to order yarmulkes for our wedding, there would be no order forms or checking boxes. My in-laws "knew a guy."

One day a few months prior to our big day, my fiancee and I accompanied my future in-laws on a trip up the Garden State Parkway to New York City. My soon-to-be father-in-law navigated his car through the busy streets of the Big Apple's storied Lower East Side, where in 1983, the scenery could have passed for nineteenth century Anatevka. Storefronts were plastered with advertisements in Hebrew. The narrow sidewalks bustled with Orthodox Jewish men clad in heavy black coats and big black hats, their faces covered with long unkempt beards and their ears obscured by curly locks of payos that bounced as they walked. Women with sullen, expressionless faces, their hair covered by opaque cloth, wrangled scads of children — the boys in black with white shirts, the girls in white blouses and long dark skirts. My father-in-law guided his car into a parking space and killed the engine. We all got out and I dutifully followed my father-in-law down the street, leaving Mrs. P and her mother to window-shop — or shop shop — while we menfolk fulfilled a mission.

My father-in-law examined the addresses above the narrow doors as we walked along. We stopped at a nondescript wooden entrance. My father-in-law pressed a button on a panel with names in Hebrew and other buttons. An intercom speaker clicked on and a crackly voice said a few words in Yiddish. My father-in-law replied in Yiddish and we were buzzed in. We climbed a set of steps to another door that creaked when we swung it inward. The door yielded to an otherworldly view of a dusty room, cluttered with huge bolts of folded fabric and dozens of men — some on ladders, some leaning over work tables, some at desks — shouting at each other in Yiddish, their words overlapping other nearby conversation, that was also being shouted.

We approached a makeshift service counter (actually a thick plank of wood straddling a couple of piles of fabric). A man eyed us up and down and asked our business. My father-in-law asked to speak to "Yankel" or "Yussie" or some such similar name. In less than a minute, a small, wizened man appeared before us. He bore the facial features of a turtle and sported the same sort of facial hair that we saw on the men outside. He said a few words in Yiddish to my father-in-law and then waited for my father-in-law to respond with an order. And order he did — although I couldn't tell you what exactly he asked for because, as he pointed and gestured, he didn't say a single word in English. The old man interrupted a few times to ask a question, but for the most part he stood and nodded. When my father-in-law finished, the old man rolled his eyes in thought. Then he said a few final words in Yiddish and shooed us off with a wave of his lanky, wrinkled hand. Realizing our time here was up, we obliged and left the same way we came in. As we closed the door behind us, we could hear the men continuing their shouting.

"What just happened?," I silently asked myself. Then I asked my father-in-law the same question — aloud this time. He laughed and told me he ordered gray suede yarmulkes for our wedding, with our names embossed in gold text on the inside. Confused, I scratched my head and pointed out that the old man  didn't write a single thing down — not a quantity or a fabric identification number or even our names. For goodness sake, he didn't even give us a claim check to present if and (most importantly) when the order is ready to be picked up. My father-in-law reassured me that it was fine and there was nothing to worry about. Still not convinced, I noted that the man was pretty old. "What if he dies between now and our wedding?," I proposed, "He didn't write anything down. How will anyone know the order or anything?" My father-in-law laughed and changed the subject to where we would go for lunch.

My in-laws returned to New York a month or so later to pick up the yarmulke order. And it was ready and it was perfect.

Thirty-five years later, that experience still fascinates me. In a time before computers, this old man (who looked as though he was born old) ran a business where he didn't even use a pencil. Think about that the next time your internet connection cuts out for a few minutes while you're watching a cat video on YouTube.

www.joshpincusiscrying.com
Posted by josh pincus is crying at 7:59 AM