if sugar was as sweet as you, honey, sugar just couldn't be bought 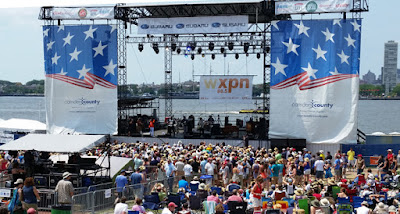 Every summer, my wife and I attend a three-day music festival, assembled and hosted by what is arguably the greatest radio station in the Philadelphia area. Sprawling across Wiggins Park, a natural amphitheater on the Camden, New Jersey waterfront, the XPoNential Music Festival* is a glorious communal celebration of listeners sharing and rejoicing in their love of music and their affection for member-supported WXPN. The fine folks at WXPN spend nearly a year scouting out and securing commitments from an eclectic mixture of performers representing a diverse cross-section of music — from searing guitar-driven rock to sweet acapella harmonies and everything in-between. Just like the station itself, there's something for everyone. For the past several years, the evenings have been capped off by a headliner of "superstar" proportions taking the stage of the Susquehanna Bank Center, a large venue just a short walk from Wiggins Park. Last year, Beck and indie darling Ryan Adams performed. The year before, it was alt-rockers Wilco and folk granddaddy Bob Dylan. You get the idea.

In addition to a weekend full of great music and (sometimes) brutal sunshine, the festival offers a variety of businesses the opportunity to sales-pitch concert-goers and entice them with free samples and logo-emblazoned tchotchkes. Over the course of three days, one can score shot-size bottles of iced tea, single-serving cups of ice cream and a cup of "chip" and salsa (that's correct — a single chip) along with fistfuls of branded keyrings, guitar picks, sunscreen and bag clips. Mrs. Pincus loves to visit the different booths, schmooze with the vendors and pick up some of the freebies.

The festival's major sponsor is Subaru, the yuppie-friendly automobile company. Subaru boasts a huge booth decked out in misting fans, phone charging stations and funky couches. The latest model of Subaru SUV is available for inspection and answers to your questions are supplied by any number of fresh-faced young salespeople, all sporting big smiles and their Subaru-logoed finest.

My wife learned, through an overheard conversation, that Subaru owners are offered special perks just for being Subaru owners. Now, I maintain that Mrs. P is the nicest person that ever walked this earth. She is sincerely sweet and charming, however, she does get a kick out of seeing what her charm can get her. On Friday evening, the first day of the festival, Mrs. P began her friendship with the folks at the Subaru booth. I saw her talking and smiling at a young lady holding a stack of new model brochures. Soon, my wife joined me in a free sample of on-premises-made guacamole from the Whole Foods booth, adjacent to the Subaru set-up. Suddenly, the young lady from Subaru tapped my wife on the shoulder and covertly informed her that the wristbands for the exclusive "Subaru owners" area would be available on Saturday afternoon and we should definitely stop back. When the young lady strode away, I asked Mrs. P why that girl thought we own a Subaru.

"I told her how much we love Subaru. I never actually said we own one. She just assumed...," Mrs. P smiled that same charming smile.

On Saturday, day two of the festival, Mrs. P ingratiated herself with a good-looking fellow who looked like late surfing legend Duke Kahanamoku. Based on how he carried himself, he obviously was in some sort of managerial capacity with Subaru. Mrs. P began telling him about her conversation with the young lady on Friday. She made a point of mentioning the young lady by name and repeated her sentiment about our love for all things Subaru. Duke smiled and reached into a storage section of the booth and produced a couple of black Tyvek wristbands with a repeated Subaru logo pattern. "These," he explained, "would permit you access to the Subaru VIP area at the Susquehanna Bank Center. They have a buffet and drinks. It's just a way of saying 'thank you' to our loyal Subaru owners." We happily accepted the wristbands and thanked him.

I headed back to our chairs to catch a performance by indie Tex-Mex rockers Calexico. Midway through their set, Mrs. P joined me. Once again, she was smiling. She fanned out three tickets for the Subaru VIP section of the reserved seating area. Duke had come through again. Our regular festival passes included standard lawn seats at the Susquehanna Bank Center. Reserved seats are additional. Free seats, however, are welcome bonus. As evening fell, we found ourselves in the Subaru VIP area eating salad and chips and cookies (we're vegetarians and non-drinkers, so we skipped the buffalo wings and beer, although the other guests happily chowed down) while we mingled among actual Subaru owners. Mrs. P passed on the tickets herself, opting to let me, our son and our friend take the seats. She said she would just hang around the VIP area and meet us after the show. When we had enough of headliners My Morning Jacket, we vacated our seats and returned to the Subaru VIP area. Mrs. P said she had to say "goodbye" to her "friends" and shook hands with a group of guys (guys I never saw before) who were smiling and laughing while bidding her "adieu." Once again, there was evidence of that "Mrs. Pincus" charm.

Sunday, day three of the the festival, brought more surprises at the Subaru booth. Although Duke was unable to secure reserved seats, but he gave us a Subaru t-shirt as a consolation. But later that evening, when we met up with him at the Subaru VIP area, he produced a pair of reserved seat tickets after all. "Here," he laughed, "for my favorite Subaru owner!" It was already late in the show, so we politely declined the offer. We were about to make our exit anyway, so we thanked Duke again for his generosity and hospitality.

As we made our way to the parking garage, I think Mrs. P was already planning for next year's festival. Maybe she'll sweet-talk us into playing a guitar solo with one of the bands.

* presented by Subaru
Posted by josh pincus is crying at 10:05 AM