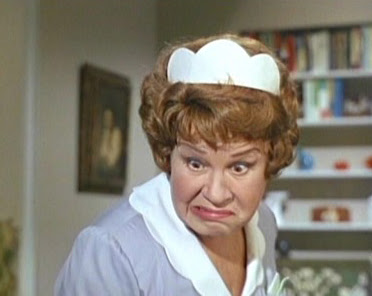 My love for old television shows is no secret. Every morning, before I go to work, I pour myself a cup of coffee and stretch out on the sofa for a short visit to the black and white world of McHale's Navy or I Love Lucy* or The Donna Reed Show. I love the nostalgia of times past. I love the novelty of the far-fetched situations. I love seeing famous actors in bit parts early in their careers. (I've spotted a pre-Oscar-winning Cloris Leachman seeking advice from wise neighbor Donna Stone on The Donna Reed Show, Estelle Parsons, another Oscar winner, as a prospective customer for vacuum cleaner salesgirl Patty Duke and Jack Nicholson as the frantic father of a missing boy on The Andy Griffith Show.) I love the uncomplicated mawkishness of Mary having two dates for the same night or the panic over Uncle Tonoose dropping in for an extended weekend stay. (Cue spit take!)

There is one show, however, I do not get. I watch it, mind you, I just don't know why. I don't enjoy it. I can't, for the life of me figure out its appeal or who its target audience was in its initial run from its premiere in 1961 to its swan song in 1966. With each episode (and there are five seasons worth!), it gets increasingly frustrating.

Of course, I'm talking about Hazel.

At one time, Shirley Booth was a popular, versatile and well-respected actress. She made her debut on the Broadway stage in 1925 and went on to win an impressive three Tony Awards including Best Actress in the gut-wrenching drama Come Back Little Sheba. Shirley reprised the role of "Lola Delaney" in the film version of the play and won an Academy Award for her effort. She also received high praise for her role as "Dolly Levi" in Thornton Wilder's The Matchmaker, the non-musical source for Hello Dolly. Although she only made five films in her career, she was a staple in live theater, originating the roles in The Desk Set and Summertime that Katherine Hepburn eventually played in the films. She was the wise-cracking "Miss Duffy" on radio's Duffy's Tavern and she auditioned for, but lost, the lead role in Our Miss Brooks to Eve Arden.

In 1961, Shirley Booth was tapped for the live-action portrayal of Ted Key's cartoon maid Hazel, a popular character frequently appearing in single-panel strips in the Saturday Evening Post. The half-hour sitcom co-starred Don Defore as George "Mr. B" Baxter, Hazel's irascible employer, Whitney Blake as his ever-patient wife and little Bobby Buntrock as their son Harold. The show chronicled Hazel's weekly exercise in meddling, interfering, insubordination and arrogance. She was a smug, sneaky, obnoxious, condescending, self-righteous troublemaker. She regularly second-guessed and undermined both Mr B's business dealings and home life, despite bragging to the other maids that she worked for a "prominent attorney who practically runs the city for the mayor." She repeatedly interrupted client meetings with inane crusades for a new flower garden in the park or a new jungle gym for the playground. She often talked back — or worse — talked over her boss. Sure, she made impossibly flaky and delicious dinner rolls, but that's hardly an argument for putting up with all that other nonsense.

Still, I can't figure out who the hell was watching and enjoying this infuriating bullshit? Who was relating to this? I grew up in a middle class family in the 1960s. We didn't have a live-in maid. I didn't know anyone who had a maid, live-in or otherwise. Yet, everyone in the Baxter's neighborhood has a maid — and Hazel is friends with all of them. (And by "friends," I mean she's sticking her bulbous nose into their business as well.)

I can't understand why the ever-exasperated Mr. Baxter didn't fire Hazel's ass the first time she talked back to him or fucked up some important family plan or business venture because "she had a better idea." Hazel criticizes Mr. B's weight, clothing, golf game, business decisions and friends. She barges into personal husband-wife discussions (May I point out that the lovely Whitney Blake is way out of Mr. B's league!) and dispenses un-asked-for advice to impressionable young Harold (who thinks Hazel is "the greatest!"). When Defore and Blake were unceremoniously canned in favor of a more youthful couple, Ray Fulmer and Lynne Borden were introduced as George's brother and sister-in-law. Hazel went to work for them, inexplicably taking Harold along with her. But for some reason, Hazel was an instant hit and a ratings monster. It ranked in the Top 25 shows for most of its five seasons, including the Number 4 spot during its first. I know there weren't as many television choices as there are today, but — jeez! — I think I would have watched almost anything besides this irritating depiction of suburban life.

So, why do I watch it now? Because, in comparison, I would rather suffer through Hazel disrespecting poor Mr. B than be subjected to the reality shit storm that The Today Show has become.

* It should be noted that I like everyone in I Love Lucy, except for Lucy. The ensemble cast — William Frawley, Vivian Vance and Desi Arnaz — are funny. Lucille Ball, however, is annoying, overbearing and not at all funny. Maybe they should have called the show "I Love Everyone Except Lucy." But, I watch it just the same.
Posted by josh pincus is crying at 7:52 AM