I foresee terrible trouble and I stay here just the same 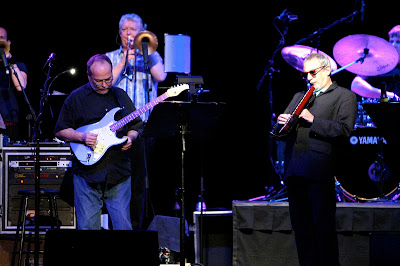 If you are a fan of Steely Dan, you might as well just stop reading right now. There is nothing I am about to say that you will like. Go and explore some other part of the internet for a few minutes.

Mrs. Pincus and I went to see the local stop on the oddly-named Rockabye Gollie Angel Tour 2015, featuring the unusual pairing of Steely Dan, the venerable jazz/rock band that dominated FM dials for the better part of ten years, and Elvis Costello, the one-time angry young man of New Wave who has now emerged as the elder statesman of aging punk rockers, if only for his career longevity.

I have seen Elvis Costello a few times before and, while I am a fan, I have been less than impressed with his live show. I saw Elvis and his backing band The Attractions in 1982 when he was promoting Punch The Clock, not one of my favorite of his twenty-four (to date) releases. I also saw him with The Imposters (essentially The Attractions with a substitute for bassist Bruce Thomas) on New Year's Eve 2007 in Atlantic City. While the performance was entertaining and his song selection satisfying, he curtly vacated the stage on the dot of 12:30 AM, as though his union contract prohibited playing for one single minute more. Steely Dan, on the other hand, were never a favorite. Sure, I heard their ubiquitous sound for nearly a decade. If you owned a radio, you had no choice. They were hit machines in the progressive 1970s. They specialized in slickly-produced, jazz-tinged poetic mini-epics that maintained uniformity from song to song and album to album. While I own many entries in Elvis Costello's vast discography, I own only Aja, Steely Dan's 1977 career-defining monster — and that purchase was made when I was 16. I don't dislike Steely Dan. I just wouldn't number them among my top 100. Or even 200.

Back in April, Mrs. P purchased a pair of lawn seats for this show through Groupon, at a deeply discounted price that we just couldn't turn down. Considering the unpredictability of Philadelphia summers, we couldn't have been blessed with a more beautiful evening. We stretched out on our blanket and sipped the bottled water* we brought with us. I observed the crowd filing in to the venue as we waited for the concert to begin. I watched as men and women who could only be described as "old" shuffled along the parched grass that Susquehanna Bank Center tries to pass off as "lawn." The bulk of the crowd were weary, tired, hunched-over figures. Men in ill-fitting shorts, sad expressions on their collective faces. Women wearing too much make-up to conceal the lines of a hard-lived life. "Jesus!," I whispered to my wife, "Are we as old as these people?" It was pretty obvious that the overwhelming majority of these concert-goers were there to luxuriate in the dulcet, silken sounds of Steely Dan and not the piss-and-vinegar petulance of Mr. Costello.

At a few minutes before the posted start time, Elvis Costello, sporting a wide brimmed Panama hat for reasons only known to him, took the stage with his band — busting out "I Hope You're Happy Now" from his 1984 release Goodbye Cruel World, an album that Elvis himself described as "the worst album of my career." He and the band sped through an hour or so of career-spanning hits. At the end of his set, he waved and quickly exited and — encore-less — stayed exited.

The sun set, the stage lighting glowed and soon the multi-piece touring version of Steely Dan filled the stage, complete with a trio of slinky back-up singers. Craggy-faced, satin-voiced Donald Fagen rewarded the crowd early by kicking things off with an almost album-quality rendition of "Black Cow." from the aforementioned Aja. From that point, it was hit after hit after hit, sounding like a Steely Dan jukebox or like we were listening to the radio and it was once again 1978. The crowd was responsive, entranced and enchanted. Everyone knew every beat, every cue and nearly every word that they spent decades trying to decipher. They were getting exactly what they came for. However, for this casual listener, every single song — including the ones I knew — sounded identical to the one before and after it.

I saw my first concert in 1975. I was fourteen years-old and I went with some friends to see Alice Cooper as he brought the sinister spectacle that was the Welcome to My Nightmare show to the Philadelphia Spectrum. Bitten by the concert bug, I was rabid to see another. I chose Midwestern folkies America for reasons I can't begin to fathom now. I was not a fan. I owned none of their albums. I was familiar enough with some of America's songs from the radio ("Tin Man," "Sister Golden Hair," "Horse with No Name"), with their sweet harmonies and nonsensical lyrics. But I went to see them nonetheless. I remember hearing the hits but there were no standout moments.

That was how I felt as Steely Dan bid "farewell" to the evening with a spot-on, album-duplicate take of "Kid Charlemagne." It was pleasant, non-offensive and not at all memorable. I fully realize that I am in the minority and I have come to the conclusion that every band is someone's favorite band. The thousands of dancing, delighted faithful around me would attest to that — trick knees and artificial hips be damned! All in all, it was a lovely evening in lovely weather with my lovely wife.

Oh, that picture at the top? That's a shot I selected from a Google search. We weren't nearly that close. We were waaaaay back where the muddy sound system at the Susquehanna Bank Center sounds even muddier. Here is my view from the lawn. It was a nice night out just the same.

*One bottle each! No outside food, forcing guests to partake of thirty-dollar pizza and sixteen-dollar beer — in addition to the outrageous thirty-dollar parking fee!
Posted by josh pincus is crying at 6:09 AM