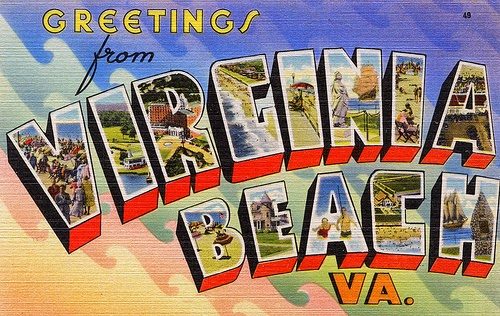 Our destination was a family wedding in Virginia Beach, a seaside resort town with a population of just under 450,000, making it the 39th largest city in the United States. (If a few more people vacate Mesa, Arizona, VB, as it is affectionately known to locals, will move into the coveted 38th spot.)

My wife has family in Virginia Beach and she takes the six-hour drive south several times a year. During the planning stages of these trips, she obligingly asks if I'd like to accompany her. My usual answer is, "They want to see you. They don't want to see me." That is the true consensus, although on the surface, that feeling is vehemently denied. This time, however, I thought I'd take the trip, after hearing that so many people Mrs. P met over the course of these visits were a bit skeptical that there even is a "Mr. Pincus." I'd show them!

The wedding itself presented an interesting situation. The groom (my wife's cousin) is a field reporter for the local NBC affiliate in Virginia Beach. The bride is the weekend news anchor for the competing CBS affiliate. They are a terrific — and extremely photogenic — couple, who swear their union is based on love and not at all on "out-scooping" the competition. (I would add that he's Jewish, she's Roman Catholic and they were married by a Methodist minister, but you'd probably think I was making the whole thing up. So, in order to keep what little credibility I have — I'll skip that part.) The ceremony was lovely. I was introduced to several of those who doubted my existence. Though they gave me the ol' narrow-eyed once-over, some were still not convinced — despite my insistence that we've been married for almost 30 years. Meanwhile, the newlyweds and their friends partied hard into the night, eventually ending up at a bar in the lobby of our hotel. The next morning, a few of the groomsmen showed up for breakfast in the same clothes they wore when they escorted wedding guests to their seats. They either each rented several of the exact same suits or they had a really, really good time.

On Saturday morning, we were afforded some free time before the wedding. My wife was determined to take in some of the famous Virginia Beach sunshine. I was determined not to set foot on sand of any kind.  I shun the beach in any form. I don't like the water, especially when other people are in it. I don't even own a bathing suit. As an alternate activity, I trekked up the "Boardwalk" to see what this resort town had to offer. When I heard "Boardwalk," my head was immediately filled with memories of the Atlantic City Boardwalk of my youth, its perimeter lined with cotton candy, balloons and ferris wheels, its splinter-filled planks daring bathers to tread barefoot. The Virginia Beach "Boardwalk," however, is actually a three-mile stretch of concrete, totally uncontaminated by boards. The jewel in the crown of the cement promenade is a 31-foot tall bronze statue of King Neptune, a shirtless, gray-green behemoth that looms malevolently over the gawking tourists, keeping close watch on adjacent Neptune Park and the awkward teenage cover band that was rocking its small bandstand. The figure is both stunning and frightening. There are other assorted memorials and sculptures that dot Virginia Beach's Boardwalk, lending just enough reverence and history to the otherwise jubilant atmosphere. There's the Norwegian Lady, a nine-foot, forlorn-looking patinated lass erected to commemorate the wreck of the Dictator in 1891. (A duplicate statue stands in Østfold, Norway.) Nearby is the recently-installed Naval Aviation Monument Park, featuring a quartet of statues honoring the history of ... you guessed it ... naval aviation. (This particular weekend hosted a massive "sand soccer" gathering, with scores of colorfully-clad youngsters kicking up the sand and clamoring for a beach's worth of pizza and lemonade. "Learning" didn't rank high on their list of priorities.)

On my walk back to my hotel, I discovered the real draw of Virginia Beach. If you like beer, pancakes and henna tattoos, this is the place for you! For nearly thirty blocks, I passed enticements in varying sizes and establishments offering endless brands of barley brew, unlimited buffets of flapjacks and modestly priced, hand-applied temporary body art. This place is a one-stop shop for the beer-drinkin', hotcake consumin' disciple of self-expression. As long as your self-expression does not include foul language. In the 1990s, a "No Swearing" law was passed in Virginia Beach. The Boardwalk and the beach block of Atlantic Avenue are punctuated by these humorous-looking, yet no-nonsense, signs reminding revelers to "keep it clean."  So, please, drink to your heart's content, but drop an F-bomb and you're subject to a $250 fine and 10 days community service. I shit you not!

Virginia Beach is not unlike any one of a hundred little resort towns that dapple the length of the Eastern seaboard. Though some are big and some are small, Virginia Beach has something that those other municipalities lack.

www.joshpincusiscrying.com
Posted by josh pincus is crying at 6:36 AM