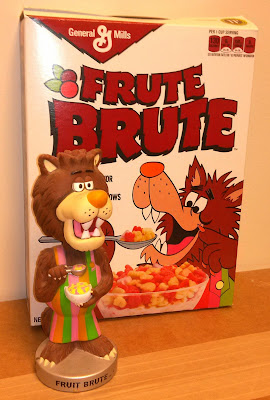 In 1971, the geniuses at General Mills released two new cereals that sported monsters on the boxes instead of the usual happy elves or rambunctious tiger or some racist character that was slightly less offensive than Little Black Sambo. Monsters, goddammit! How cool was that! In '71, I was of the prime target age group to which these sugar-coated, marshmallow-enhanced empty calories were marketed. In 1974, the brilliance struck again, as the good folks in the test kitchens of General Mills released - nay, unleashed - Fruit Brute. It was an early morning dream come true. Where the first incarnation of the monster cereals were standard kid-friendly fare of chocolate (Count Chocula) and strawberry (Franken Berry), they crossed the innovation line with Fruit Brute. Fruit-flavored cereal (or at least some laboratory's interpretation of fruit flavors) mixed with lime-flavored marshmallows. Lime! Motherfucking lime! This took the most important meal of the day to a higher level. And, as a bonus, there was a werewolf on the box!  A werewolf! Oh my God, be still my adolescent heart! I couldn't get enough Fruit Brute.

Well, General Mills discontinued the manufacture of Fruit Brute the year I got married, but I had long since stopped eating cereals that were geared to children (with the exception of the occasional bowl of Cap'n Crunch). Three years later, Fruity Yummy Mummy was introduced as a feeble substitute, but the scare comparison between a vicious, bloodthirsty lycanthrope and a gaily wrapped dead guy with a shit-eating grin was nearly non-existent. Besides, I had begun to observe the traditional values of kashrut (keeping kosher). It seems those delicious marshmallow bits that propelled me through my youth were trayf (not kosher). They were chock full of gelatin with is made from... well, if I told you, you'd probably throw up and then swear off marshmallows (and Jello and Peeps and Circus Peanuts) forever. And then throw up again.

As this summer drew to a close, my son emailed me a link to an online article about a limited-edition Halloween distribution of the monster cereals. Now, General Mills has done this in the past several years, re-releasing Count Chocula, Franken Berry and the elusive blueberry-flavored Boo Berry in redesigned boxes graced with hi-tech and distorted renditions of the familiar monster mascots. But this year, the line-up included Fruit Brute (now, inexplicably spelled "Frute Brute"). Childhood memories surged through my once sugar-addled brain. Visions of bowls full of brightly-colored bits swimming in pastel-tinged milk as Tennessee Tuxedo and Underdog flickered across my black-and-white television screen filled my consciousness. My head nearly exploded when I read that Target stores would be offering the cereal exclusively in retro-style boxes. I needed a box of Fruit (Frute) Brute and I needed one now.

Last night, I bought a box of new "Frute" Brute at Target. As a kosher-observing vegetarian, I had no intention of eating the cereal and it's animal-derivative marshmallows. I wanted the box to display in my office at work, in coveted place alongside my Fruit Brute bobblehead figure. It would serve as a constant reminder of a simpler, stress-free time long in my past. As I was about to place the box in its position of honor, My friend and co-worker Kym (of Breaking Bad spoiler fame) swung by. I offered her the cereal to take home for her daughter Elle. Kym wrinkled her nose at first, explaining that she refers to obviously unhealthy, overly-sugared breakfast food as "vacation cereal," reserved for starting the day on brief trips to the shore or some other laid-back and carefree locale. However, she reconsidered and happily agreed to take the cereal for Elle. I ran my thumb under the box flap, breaking the factory seal. I slowly extracted the translucent polybag from the box, its colorful contents glowing harshly under the fluorescent lights.

"I'm sure Elle would like the box.," Kym stated, momentarily confused my by actions.

ADDENDUM
Elle had a big bowl of Frute Brute for breakfast this morning. She even drank the sickeningly-sweet surplus milk, proclaiming "I LOVE THIS CEREAL!" She anxiously awaits breakfast tomorrow morning, when she will - no doubt - polish off the remainder of the bag.

I feel for you, Kym. Elle will be bouncing off the walls until 10 PM and then wake up at 4 AM, demanding her Frute Brute fix. This stuff is worse than heroin.