I can't get next to you 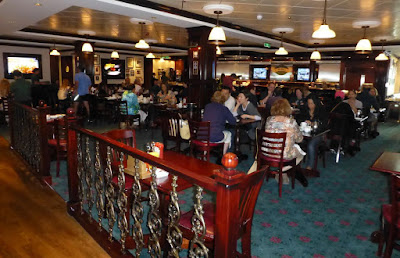 My wife and I just returned from our sixth — count 'em sixth — cruise. Now, there's a sentence I never thought I'd see myself type. Don't get me wrong. I have enjoyed each and every one, but, honestly, they all have been very similar experiences. First of all, we are on vacation, so the level of energy we exert is minimal... as it should be. Sure, there are people aboard the ship who jog or exercise or swim or workout in the large gym. Not me. I don't do those things at home, so I am certainly not doing them on vacation. What I do most often is eat, as does the majority of the passengers. After all, cruise lines are famous for their sumptuous and abundant buffets, most available 24 hours a day.

Our typical day on the ship would be to wake up around 8 a.m. We dress and head out the the first session of trivia of the day. That's what we like to do: play trivia games. It's fun. It's silly and requires little to no energy... except for thinking. Considering that the prizes are usually some sort of cruise line branded tchotchke, we don't try to be especially competitive. Well, hardly ever. After winning trivia (yeah, we usually win. Either we are really smart or the other passengers are hungover), my wife and I find our way to the breakfast buffet. Our days are leisurely, relaxing and effortless. They are punctuated by mindless activities and eating. That may not sound like much of a vacation, but to paraphrase ol' Doc Brown from Back to the Future III: "Your cruise is whatever you make it, so make it a good one."

Some folks, however, spend a ton of money on a trip such as a cruise and have no idea how to relax. Or even how to interact with other people. Over the years, Mrs. P and I met many fellow passengers who were travelling as a single. Even on this most recent cruise, we met several people who were vacationing by themselves. But, they were friendly, personable and outgoing. Richard, one of the members of a Facebook group my wife joined prior to our trip, was a great guy. Funny, interesting — a real character. He even wrote a book that he allowed his cruise comrades to download to their Kindle for free. Mrs. Pincus, a supporter of the arts... I guess, purchased an actual copy. Richard was flattered, adding there's a possibility she may have purchased the only copy. George was a hoot. Tall and quite noticeable, George bore a striking resemblance to beloved teacher-turned-meth-dealer Walter White from TV's Breaking Bad. He stuck to his story that it was merely a costume (as we sailed over Hallowe'en), but I was leery. Again, George was traveling alone, but every time we saw him, he was in the center of a crowd — smiling and laughing and making the most of his cruise. There are people, though, that board the ship with luggage in their hand and a chip on their shoulder. We met one.

A few days into our cruise, after mingling with the fun group of people at a pre-arranged gathering of the aforementioned Facebook group, Mrs. P and I spotted Richard sitting at a small table in O'Sheehan's, the signature Irish pub that is featured on nine Norwegian Cruise Line ships. I quickly made my way back to our cabin — just three decks up — to grab our copy of Richard's book and a black Sharpie with which he could inscribe the title page. In a flash, I returned and handed the book over to my wife. She took over the charade from there. We strode up to Richard, seated at his small table-for-one (as the opposing chair had been removed) and, as we feigned excitement,  Mrs. P announced, "Oh my gosh! Richard! Richard is on this ship!" Richard laughed and tried, unsuccessfully, to hide under his baseball cap. A few patrons craned their necks in our direction, trying to figure out if Richard was someone they should know. Mrs. P laid it on thick. "I have your book, Richard. Could you please sign it for me?," she implored with faux adoration. Richard, who, of course, we had met earlier, played along, dramatically signing the book with an exaggerated flourish. We stood by Richard's table chatting briefly while he waited for his lunch order to arrive. We flanked Richard's table as we talked. A few minutes later, a waitress led a gentleman to the table across the narrow aisle from Richard. I could see, in my peripheral vision, the man was not sitting. Instead, he stood at attention alongside his chair. We continued our talk with Richard, but I could see that the man at the next table, still standing, was shifting his weight from one foot to the other. From his body language, he seemed to be quite annoyed. The waitress returned and asked if everything was okay. "I'm just waiting for someone.," he replied. He remained standing, when suddenly, he tapped my wife on the shoulder. Mrs. P turned to him. Through clenched teeth, he seethed, "You are making me very uncomfortable by hovering near my table! Could you move?" Mrs. P apologized. "I'm so sorry," she said, "I'm glad you said something." We sort of scooted over to the other side of Richard's table. By this time, his lunch had arrived. We told him we'd catch up with him later. As we left O'Sheehan's, my wife, once again, apologized to the "hover table" guy. He grumbled under his breath at Mrs. P's parting atonement.

At first, we felt bad. But, the more we thought about it, the more we realized the absurdity of that guy's reaction and behavior. Here he is, on a ship by himself, with 4000 passengers — and he's angry because someone was standing near him?!? Hey dude, if you don't like people standing near you, a cruise ship is the last place you should be. At some point during the week, someone is gonna be near you.

The next morning, Mrs. Pincus and I were in the Garden Cafe, the ship's buffet, finishing up breakfast. Suddenly, I saw the "hover table" guy place a plate filled with breakfast foods at a table just a few feet from where we were sitting. He turned and headed toward the self-serve beverage area and grabbed a coffee mug from the rack. I jokingly said that I was going to stand next to his table when he returned. I watched the "hover table guy" reach to dispense himself some coffee by jutting his hand right in front of another passenger who was also getting coffee. Again, he reached right across this poor man's personal space to grab a few sugar packets. Then, he lumbered back to his table, a scowl across his face, and seated himself at his breakfast plate. Then, he bowed his head and crossed himself. My wife frowned and commented, loud enough for me to hear, but not so loud that the "hover table" guy could hear: "Did Jesus teach you how to be rude to your fellow man?"

Now, I'm not one to knock anybody's religious beliefs.... well, actually, I am..... but I cannot be alone in the feeling of blatant contradiction between multiple instances of rude behavior and the pious act of bowing one's head in prayer and (I assume) gratitude towards a "higher being." Didn't I once hear something about: "Do not seek revenge or bear a grudge against anyone among your people, but love your neighbor as yourself" (that one is right from Leviticus.... that's the Bible). I think that includes telling someone to move and reaching your arm across someone's personal space to get a cup of coffee for yourself.

I'll bet this guy's neighbor probably lives too close for his liking.

www.joshpincusiscrying.com
Posted by josh pincus is crying at 7:58 AM