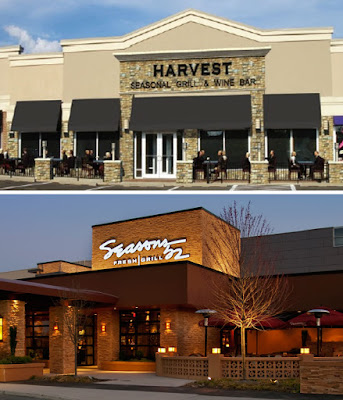 I love to eat in restaurants. I'm usually not picky about where I eat because my philosophy is: "This won't be my last meal." If I don't like a restaurant, I probably will never go back, but I am happy to give any place a try at least once. Sure, I have my favorites, although one of them is on the other side of the country and an incident with another made me change my entire way of eating. But those are isolated cases. I like several local diners and nearby locations of small chains, as well as several single location eateries.

Recently, my wife and I joined friends at a place with which I was unfamiliar. In the age of the internet, however, that is no longer an issue. A quick Google search will return everything you need to know about an unfamiliar restaurant — location, menu, price range, etc. We met our friends at a place called Harvest. Harvest, it turns out, is one of several restaurants under the auspices of the Pennsylvania-based Dave Magrogan Group (DMG), an up-and-coming hospitality conglomerate in the mold of the mighty, nationwide Darden Brands. DMG introduced an Irish-themed pub called Kildare's in 2003. According to their website, Kildare's is "wildly popular." You tell me....


Harvest (or Harvest Seasonal Grill and Wine Bar, its official name) is Magrogan's entry into the trendy "farm-to-table" style of restaurants. The dining room is dark, with stacked slate walls, dark wood accents, and dimly-lit single-bulb fixtures offering little to no illumination for each table. The menus are single-sheet tomes describing things like "farro and freekah" and other things that make one unsure of their inclusion on a menu. Our waiter, a serious fellow named Erik, asked if we had ever been to Harvest before. I explained that, while we had never been to Harvest, we had, indeed, been to restaurants and were quite familiar with how the procedure goes. With no regard for my comment, Erik launched into what amounted to a minute-long commercial for Harvest. His delivery was scripted and emotionless, as though he had recited these exact same words hundreds of times. Hundreds of times today. He pointed out and highlighted many entrees on the menu as though we were illiterate and then disappeared for a few moments, soon returning to hear our decisions.

Honestly, I don't remember what I ordered. I don't remember if it was good or bad. I don't remember if it needed seasoning, how it was plated, what vegetables, if any, were served alongside my main course... whatever it was. I do remember, however that it was overpriced. I am a vegetarian and something called a "steamed ancient grain bowl," devoid of meat, rang in at $18.00. No meat and more than the cost of the menu's cheapest hamburger. Was the meal bad? I don't think so. It just wasn't memorable.

Earlier this week, my wife's brother (her other brother) invited us to dinner at another restaurant I had never heard of. This one, Seasons 52, is one of the Darden roster of eateries, the fine folks who brought you such respected culinary institutions as Olive Garden and Longhorn Steakhouse. Seasons 52 is Darden's foray into the, obviously, lucrative realm of  "farm-to-table." I say "obviously," because Darden wouldn't waste their time if it wasn't profitable and didn't draw the masses. Based on the Italian authenticity of Olive Garden, I assume that no one associated with Seasons 52 ever set foot anywhere near a farm.

I arrived at the restaurant separately from Mrs. P and her brother's family. I found them at a dark table and took an empty seat. As I perused the menu, a feeling of déjà vu swept across my mind. I felt as though I had been here before. Then it occured to me. I had been! Except it was called Harvest. This place was identical to Harvest - the same stacked slate walls, the same dark wood, the same dim lights. I ordered from the menu and — I'll be damned! — I can't remember what I had there either. I don't remember if it was good or bad. I don't remember if it needed seasoning, how it was plated, what vegetables, if any, were served alongside my main course. It was creepy.

When we had all finished our main course, our waitress returned with a burly fellow balancing a knurled wood tray artfully arranged with a selection of shot glass-sized desserts, a new trend in pretentious after-dinner treats. He hovered a small flashlight beam over each one and recited descriptions that were straight off the Food Network. I suggested that if they just turned the lights up higher in the whole place, they wouldn't have to provide a personal spotlight for each dessert. He returned a smile that more closely resembled a sneer. When he turned the tray in my direction, I told him he could wave that light as much as he wished, I was taking a hard pass on dessert.

I am not a fan of corporate chains, although I have eaten at quite a few, mostly in other cities and only for familiarity sake. They come off as phony and geared to make folks who shop at Walmart and watch American Idol think they are dining like folks in high society. Sort of like a restaurant "experience," rather than an actual restaurant.

www.joshpincusiscrying.com
Posted by josh pincus is crying at 7:44 AM