darkness falls upon the land 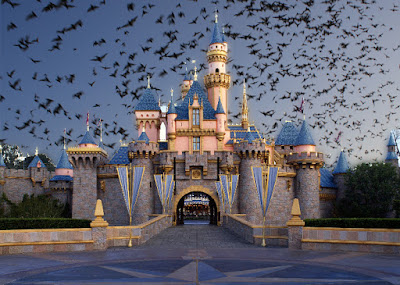 I've made no secret about my love for all — well, most — things Disney. Ever since my first trip to Walt Disney World, as a rambunctious, alcohol-sodden teenager in 1980, I was hooked. A few years later, my wife and I spent our honeymoon in the central Florida theme park. After my son was born, summers often included a family road trip, traversing I-95 down the eastern seaboard, with The Magic Kingdom et al as our destination. We took nearly a dozen trips to Walt Disney World before we would breach the next level.

A dozen or so years ago, my wife's brother got married in Las Vegas. My wife joined a few members of her family in Sin City for the ceremony. My son, E., who was still in the throes of high school, and I stayed in Philadelphia. But, thanks to the internet, we were able to watch the festivities via a webcam positioned in a corner of the chapel. It offered a panoramic view of the entire wedding and, via cellphone, my son and I spoke to the little, pixelated Mrs. Pincus on our computer screen. It was as though we were there. In a few days, when she returned to Philadelphia, Mrs. P gushed about Las Vegas. It was her first visit to the gambling mecca. She told us about the grandiose buildings, the gaudy casinos, the blazing sun (even though it was October), and her family's outrageous behavior — but that could happen anywhere. I had never been to Vegas. Actually, I had never been anywhere further west than West Philadelphia (born and raised). We toyed with the idea of a trip there ourselves, when E. had finished school for the year,

Our dreams became a reality. A reality with a bonus. We decided to fly to Las Vegas, spend a few days, then rent a car and drive to Disneyland. It would be everything we loved about vacations. Glittery casinos, spectacular shows, endless buffets, a lengthy road trip and a Disney theme park as the pièce de résistance. It was great. After three days in Vegas, we drove through the Mojave Desert until we arrived in Anaheim. As we crept down Harbor Boulevard, we could see Space Mountain just beyond the sidewalk and the Tower of Terror loomed large a short distance ahead. We felt our collective excitement build.

Our first day in Disneyland's Magic Kingdom was.... well.... magical. We honestly anticipated disappointment. Tiny Disneyland would pale in comparison to its massive Floridian counterpart. Or so we thought. Disneyland proved to be warm and welcoming and quaint and nostalgic. It came off as the embodiment of Walt Disney's original dream. Florida's Walt Disney World, while a wonderful place, is a big, sprawling, commercial destination with tourists in mind. Disneyland is a small, beautifully-themed retreat for the citizens of Southern California. A place where local residents can wake up on a Saturday morning with no plans and say, "Hey! Let's go to Disneyland today!" You would never try that in Walt Disney World. A visit to Walt Disney World requires weeks of planning and coordination. It's like plotting a military operative. There is a noticeable difference between the two parks and it's more than just being on opposite sides of the country.

Months before our trip, my son began corresponding with a group of "artisans" based in Long Beach, California. This group, "The Cult of the Eye," is the self-proclaimed "America's favorite secret society." They are a fun-loving club, expressing their affinity for kitsch through their preference of music, movies and other entertainment. Through his association with the "Culties," E. was made aware of an annual, yet unofficial, event called "Bats Day in the Fun Park." Bats Day began as a prearranged meet-up at Disneyland of patrons from two of Los Angeles' prominent goth clubs. They decided on the weekend before Labor Day, when blackout dates on their Disneyland Annual Passes had not yet gone into effect. Attendees showed up in full goth regalia — black leather jackets, corsets, fishnets, tophats, canes, fingerless gloves, pale makeup with coal-black accents. That first year the group was comprised of about 80 people. The next year, it doubled and the next year, it doubled again.

On our first day in Disneyland, my son coincidentally wore a commemorative Bats Day t-shirt that he had purchased through the event's website. A cashier in one of the many gift shops noticed E.'s shirt and asked if he would be coming to this year's Bats Day. "I don't know? When is it?," E. asked. "I think it's this weekend.," she replied. E.'s eyes lit up and he was shot with a bolt of excitement. What were the chances?

Sure enough, when Sunday rolled around, the entrance to Disneyland was a swarming knot of hundreds of black-clad goths of all ages. There were teens in tight black jeans and skull-adorned t-shirts. There were satin corseted Moms herding their child goths into some sort of semblance and tattoo-covered Dads pushing strollers with baby goths in Bauhaus onesies. They were everywhere, It was a spectacle. E. even met up with his Cult of the Eye pals and disappeared into the park until we met up with him hours later at the Haunted Mansion. At 8 PM, we would discover, was the Bats Day tradition where all event attendees would queue-up and ride the venerable Disney attraction  — an obvious favorite of the goth community — en masse. An arrangement was made (by Noah, the uncharacteristically-cheerful, diminutive mastermind with a wildly teased purple Mohawk sprouting from his semi-shorn scalp, who is the founder and organizer of Bats Day) to allow groups of 25 riders to pose on the Mansion's front steps for a quick photo-op before entering the infamous "stretching room" and all that follows. Mrs. P and I managed to place ourselves in the back row of one group, while E. joined his Cultie friends in his own photo. As the night wound to a close, we were already making plans to return the next year. And this time we would be prepared. 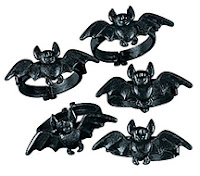 The following summer, we came equipped with our Bats Day outfits. We each chose appropriate attire that was more akin to Hallowe'en costumes, although the majority of Bats Day participants dress like that all year 'round. I selected all black clothing, while Mrs. P acquired a skirt embellished with spider webs and a black lacy shawl that resembled spider webs as well. Mrs. P also stocked up on Bats Day "accoutrements," like skull-shaped candies, eyeball lollipops and little plastic bat rings which we planned to pass out among the many goths we would encounter. When the big day arrived, my family and I, along with just over a thousand leather-and-velvet-clad men, women and children (as well as a few undefined affiliations) descended upon the "Happiest Place on Earth," for a day filled with good-hearted mayhem. We mixed and mingled among the surprisingly friendly and welcoming crowd. There was a true sense of community among these folks, despite the odd looks — and even some jeers — from uninformed guests who were just out for a day at Disneyland. Personally, I couldn't decide which scenario made this event more fun. Was it the fact that a bunch of goths had taken over the world-renowned, family-friendly Disneyland... or the reaction of the other guests seeing a bunch of goths had taken over the world-renowned, family-friendly Disneyland? It was a toss-up.
We have been back to a few subsequent Bats Day celebrations. However, in 2009, the event was moved to the first weekend in May. It seems that a large number of attendees were uncomfortable in the late August heat and preferred the more temperate clime of early spring. After all, leather and velvet (especially tightly bound corsets) are not very forgiving when the thermometer registers 80+ degrees.

Mrs. P and I have often kicked around the idea of a return visit to Bats Day. We have taken different sorts of vacations since our last trip to Southern California, mostly casino-related based on my wife's (former) fondness for gambling. But, the idea is not out of the question. There are a few restaurants I'd like to try in Los Angeles (including a vegan joint operated by former Bats Day staple "Doomie") and there are many west coast cemeteries that I have yet to explore.

So, another Bats Day?  Perhaps one day.

www.joshpincusiscrying.com
Posted by josh pincus is crying at 6:00 AM