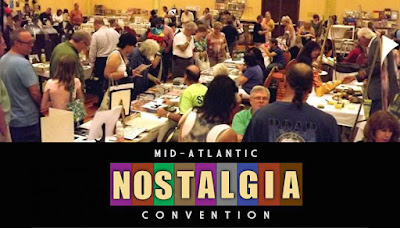 Once again, Mrs. Pincus and I attended the annual Mid-Atlantic Nostalgia Convention in Cockeysville, Maryland, the three day gathering of vendors, speakers, authors, celebrities and various other purveyors of pop culture from days past. We have taken the two hour drive south on I-95 many times over the past few years to this show. But this year's show has the potential to be our last.

I like to go to this show to add to my ever-expanding collection of autographed celebrity photographs. Mrs. P, on the other hand, dislikes the ritual of lining up and fawning over an actor who hasn't had an on-screen credit in over forty years. She prefers to scour the vendor area, searching for that elusive treasure on which she can turn a quick profit on eBay. Every once in a while, this show touts an appearance from a celebrity that sparks a warm and pleasant memory from our past, making our anticipation a bit more antsy.

Months ago, The Mid-Atlantic Nostalgia Convention. or MANC, as it is known to regulars, has grown exponentially since the first one we attended. It has noticeably gotten more crowded, probably due to the fact that show promoter and organizer Martin Grams Jr., has worked diligently to book celebrities that charge no more than $30 for an autographed photo. That is quite an accomplishment in the current trend set by such convention big-wigs as ComicCon and Chiller Theater, who have come to dictate the outrageous going rate of such memorabilia. Martin once told me that Adam West, TVs 1960s Batman, refused to budge on his $60 asking price and, therefore, would not commit to an appearance. Because MANC offers a more informal and personal atmosphere, as opposed to the rigid, cattle-chute, "get-em-in-and-get-em-out" procedure of other shows, its popularity has grown. It has also suffered somewhat.

Last year, Martin managed to book Lee Majors and Richard Anderson from The Six Million Dollar Man and Lindsay Wagner from The Bionic Woman. This was a major coup and the trio drew a lot more guests that would have normally attended the show. However, they also charged $40 each per autograph. Martin explained that he wrestled with breaking his own policy and regretfully consented because it was a "once-in-a-life" assemblage for fans. he promised to stick to his rules in future years. Mrs. P and I reluctantly shelled out $40 to Lee Majors, as my wife was a devoted fan of the show as a teenager. We did the same for Lindsay Wagner, who, disappointingly, came off as a stuck-up jerk.

This year's celebrity roster was announced several months ago and featured some enticing actors from beloved films and television shows from our youth. I was most interested in meeting Kathy Garver, best remembered as Buffy and Jody's big sister "Cissy" on the sentimental 60s sitcom Family Affair. I love Family Affair. There I said it! Also included in this year's group was Britt Ekland, the sultry Swedish bombshell and one-time Bond Girl (in The Man with The Golden Gun, reteaming her with her Wicker Man co-star, the late great Christopher Lee). Also included was movie and TV tough guy Robert Conrad, John Amos, star of Roots, Good Times and Coming to America, Debra Paget, the pretty diminutive actress from The Ten Commandments and Dabney Coleman, known for War Games, 9 to 5 and HBO's Boardwalk Empire. The real draw for Mrs. Pincus was Robert Fuller, rugged star of TV Westerns Laramie and Wagon Train. But to Mrs. P,  Fuller will always be cool Dr. Kelly Brackett on Emergency!, the original "Doctor Dreamy," nearly three decades before the moniker attached itself to Patrick Dempsey on Grey's Anatomy. (I was just informed that the character's name was "Doctor McDreamy." I never watched either show, so I apologize to anyone I may have offended.)

In the early afternoon, we parked in the Hunt Valley Wyndham Hotel's parking lot and followed the paved and landscaped walkway to the entrance. After handing over our pre-purchased admission tickets, we were unceremoniously informed that Dabney Coleman, John Amos and Debra Paget had all canceled. We were instantly disappointed, but still, we made our way though the aisles of vendors offering their pieces of the past. Mrs. P's interest was piqued by a few items, but nothing worth a full on negotiation. We descended a rickety escalator to the hotel's lower floor, where more vendors and the room housing the celebrities awaited.

I spotted an attractive, but heavily made-up older woman who I soon identified as Britt Ekland, seated along a row of tables. She was entertaining a group of fans, so I decided to press on and come back to Miss Elkand at a later time. At the end of the row was our old pal Geri Reischl, best known as replacing the uninterested Eve Plumb in the short-lived Brady Bunch Hour, a poorly-conceived variety show featuring America's favorite blended family. We have encountered Geri at enough shows that we have forged a budding friendship... an easy task, as Geri is a sweetheart. Seated next to Geri was Kathy Garver. She was surrounded by glossy photos highlighting scenes from Family Affair, as well as stills from her brief, uncredited appearance as a slave child in The Ten Commandments, guest roles in Adam-12 and Dr. Kildare, and shots of Firestar, the superhero character she voiced on Spider-Man and His Amazing Friends in the 80s. Of course, we chatted briefly with Miss Garver about Family Affair, purchased a signed photo and snapped a photo of her holding our traveling buddy Pudge.

Mrs. P was looking at some potential purchases as I made my way back to Britt Ekland, who, by this time, was sitting idly at her table, sipping a cup of coffee. I approached and offered a friendly "Hi Britt." She lit up, a smile stretching wide across her face. I told her how much I loved The Wicker Man and The Night They Raided Minsky's, two early entries in her six-decade career. I could have talked and questioned her at length about her interesting and illustrious life, including her four-year marriage to Peter Sellers, a longer union with Stray Cats' drummer Slim Jim Phantom and her notorious tryst with rocker Rod Stewart, which inspired him to write his hit Tonight's the Night in 1977. After signing a picture for me, she — not me — suggested I pose for a photo with her, directing me around the table for an intimate shot. As Britt was maneuvering her slight frame close to me, I caught a glimpse of Mrs. Pincus ten feet away, mouthing, "What do you think you're doing?" in faux jealousy. Britt laughed and purposely snuggled in closer. Once the picture was snapped by her assistant, she insisted I check it to make sure it met my satisfaction — something no other celebrity has ever done.

Out in a hallway, lines were forming for a chance to meet Robert Conrad and Robert Fuller. A group of show staff were furiously working to corral eager guests in an orderly fashion. We asked a staff member to point out the end of the line, but were informed that the line was now closed. Once again, we were disappointed, but now our disappointment was accompanied by anger. Our questions, "Will Mr. Conrad and Mr. Fuller be returning later in day?," were were met with shrugs. We headed back to the vendor room, determined to check back later for a shorter line. After an hour of perusal and few purchases, we returned to the Conrad/Fuller lines, only to be told that they were, again, closed and no more guests would be accommodated. Mrs. P fumed. "I'm done with this goddamn show!," she proclaimed angrily. We went to say our "goodbyes" to Geri Reischl and were delayed as Mrs. P vented her dismay to Geri's sympathetic ear.

As we started for the exit, I pointed out show organizer Martin Grams to my wife. Mrs. P walked right over to him and laid in. She expressed her disappointment and frustration over three cancellations and continued with her further disappointment over how the lines for Robert Fuller and Robert Conrad were being maintained. Suddenly, Martin interrupted my wife's tirade with a gentle "I'll get you in. No problem." He silently led us to the outdoor waiting area and requested the staff member-on-duty place us at the end of the line. The harried woman attempted to argue, saying she had firm instruction to not allow anyone else to join the queue. Martin flatly repeated, "Let them in the line. This is my show." Without another word, we took our place as the anchor of the snaking line.

We waited nearly two hours, biding our time with conversations with other fans, until we were granted access to Mr. Fuller, a tall lanky fellow sporting a large black cowboy hat. Mrs. Pincus gushed as she confessed her love for Emergency! and his character on the show. I offered Mr. Fuller a print of this drawing I did of the Emergency! cast. He marveled at the sketch and complimented me. Mrs. Pincus selected a photo for him to inscribe, then  he waved me off as I withdrew a $20 bill from my wallet and attempted to pay him. "I'm gonna get a frame for that drawing. You're a hell of an artist." he said. He rose to pose for a photo with us, still cutting a handsome and imposing figure at 83 years old, although he has trimmed back those awesome sideburns quite a bit. After a few shots were snapped off, he shook my hand and planted a long-overdue kiss on Mrs. Pincus's cheek. She was in heaven.

Robert Conrad, the dashing star of Wild, Wild West, Black Sheep Squadron and the one-time cocky and competitive leader of Battle of the Network Stars, has, unfortunately, been rendered partly paralyzed by a car accident in 2003. Once a righty, he now has to scrawl his shaky signature with his left hand with unsteady accuracy. He has not, however, lost his snide wit. He cracked sarcastic jokes and off-color innuendo to the delight of the fans awaiting a personal audience with the actor, At 81, he is thin and weathered, but his brash personality has not lost its edge. His endearing arrogance has not been tarnished by time or disability. He stayed until every fan was treated to the short tête-à-tête they had hoped for. I understood he did the same thing on the previous day.

Before we left, Mrs. Pincus and I stopped off at our respective restrooms in anticipation of the long drive home. As I reached out to push the men's room door open, I was met by Robert Fuller about to push the door as well. We each laughed and I respectfully allowed the venerable actor to enter first. I followed him into the empty bathroom and we each selected urinals on opposite ends of the far wall. And this paragraph is officially over.

Mrs. Pincus and I tracked down and thanked Martin once again for his thoughtfulness and for accommodating us above and beyond. We sheepishly admitted to expecting an angry confrontation, but we were grateful for the unexpected result. We told him we would be back again next year.

www.joshpincusiscrying.com
Posted by josh pincus is crying at 6:56 AM