the cold never bothered me anyway 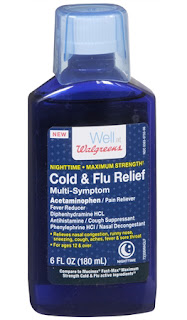 Who ever imagined that a lingering cold would land me in the hospital? Certainly not me. But, here's how it happened.....

My family and I had just returned home from a fun, whirlwind vacation in Walt Disney World. We were four adults, traveling in my tiny Toyota RAV4 packed with our luggage and in each other's close company for nearly 32 hours of actual "car time," as we opted to drive from Philadelphia to central Florida (and back) instead of taking the more modern method of flight. But, still we had a great time. That is, until we realized that our little caravan had turned into a rolling Petri dish during our return trip. My son, who makes his living as an on-air host at a local radio station, was the first to exhibit the scratchy throat and stuffy nose symptoms of an oncoming cold. His girlfriend, ever the trooper, fought off a few sniffles and I could feel that feeling in the back of my throat as well. By the time we got home, my son had to miss a few more days of work and I began to display the full-blown effects of an early Autumn cold. I waged the battle with over-the-counter remedies that really don't work.

For three consecutive nights before bed, I downed a shot of Walgreen's version of NyQuil, not event the real stuff, just a store-branded equivalent. It wasn't doing a thing for my illness, yet I still continued to take it.

Every morning, I wake for work and shuffle to the bathroom, where as part of my regular ritual, I take a 10 mg tablet of Amlodipine (for high blood pressure) and a 10 mg tablet of Lipitor for... gosh, I'm not even sure. On Tuesday, however, at 6:30 am, I shuffled into the bathroom, opened the medicine cabinet, unscrewed the lid of the Amlodipine bottle and, suddenly, this was my view... 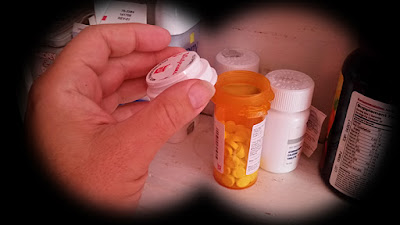 I could see my peripheral vision closing in like so many movie special effects simulating someone looking thorough a pair of binoculars. I knew I was about to pass out. I was totally aware of the fact that I was about to pass out. The next thing I knew, I was lying on my side on the bathroom floor, my knees curled up towards my chin. I could feel the bathmat bunched up underneath my prone body. "Wow!," I proudly thought to myself, "I knew I was about to pass out and I had the wherewithal to sit down of the floor." I lay on the floor for a few more seconds before slowly righting myself, still offering self-congratulation for my clear thinking in a potential moment of crisis. However, when I glanced around, my Amlodipine pills were scattered all over the bathroom floor, the empty bottle laying on its side under the radiator. "Oh," I silently reconsidered, "I guess I wasn't such a quick thinker." I began to search for and gather up the pills that littered the floor until I opened my eyes to find myself flat on the floor once again. Except this time, my hand was cocked and (luckily) cradling my head. But I could feel that the back of my head was wet. I grabbed a wad of toilet paper and held it to the back of my head. I also spotted a smear of blood on the tile floor near the bath tub. I slowly got to my feet with the aid of the solid tub as a support. I shuffled back to the bedroom and gently shook my still-sleeping wife.

"Susan," I whispered. She stirred lazily. "I just passed out in the bathroom," and just to panic her even more, I added: "Twice."

I shambled over to my side of the bed and literally plopped forward, my face burying into my pillow.

Mrs. P, now fully jarred awake, asked, "Do you want to go to the hospital?" I replied with the standard answer, as approved to maintain my membership in good standing in the Indestructible Male Member of Society Club. I, of course, answered, "No." And, in case the membership committee was lurking nearby, monitoring my responses to such masculinity-threatening questions, I sealed my stance with "I'll be alright." What an idiot!

Three hours later — that's right, I laid there for three hours, drifting in and out of consciousness while my wife applied bags of ice and wet towels to the wound on the back of my head. Finally, she said, "Y'know this cut on your head could probably use a stitch or two. You should probably go to the hospital." Still not giving in, I conceded under the pretense of "I'll go... if it will make you happy." Not me. This was all just to pacify my wife.

I managed to pull on some clothes and she drove to the hospital. I sat in the passenger's seat with a paper towel clamped to the bleeding laceration on my head. Mrs. P and I explained our presence to the reception nurse in the emergency room and I was immediately admitted. Suddenly, a swarm of attentive medical personnel descended upon me like seagulls on a stray french fry on the beach. I was poked and prodded, questioned and researched. The nurse who seemed to be running things, a burly guy who resembled "Newman" from Seinfeld, pointedly asked "When did this happen?" and, when given the answer, frowned and scolded "You should have come in at 6:30!" I could feel every accusing eye in the room accusing me even more.

It was decided that I would stay in the hospital for 24-hour observation. Before I was placed in an actual room, I was subjected to a barrage of tests — a CAT scan, an EKG and others with equally-cryptic sounding acronyms. I was hooked up to a heart monitor whose leads were affixed to my hirsute torso with extremely sticky leads. There seemed to be a serious concern about the accuracy of the readings and proposal of shaving some of my chest hair was brought up several times. In the end, the leads were adjusted and my chest was spared.

After all the tests were completed, a friendly young intern entered the curtained ER area. He told me he was there to close up my wound. He asked me to roll over on my left side and he positioned himself behind me, completely out of my line of vision. Taking this into consideration, he happily narrated the entire procedure to me, as he irrigated, cleaned and ultimately stapled the four-inch gash closed with what sounded like the stapler I have on my desk at work. He admired the eleven staples he inserted into my scalp, even removing and replacing two that he just "didn't like the looks of," I helplessly obliged as he readjusted his handiwork. At last count, Mrs. Pincus was only off by nine.

I was given ample time to rest and then I was transported by wheelchair to the room that would be my home for the next day. I was hooked up to an electronically-monitored IV that would be my constant companion for the next 24-hour period. Then began the parade of more hospital workers, each with a different task all ending with me. I had my blood pressure taken every few hours and four different people, each claiming to be from "the lab" took blood from my left arm at regular intervals. I believe they were actually using their plasma harvest to paint a room nearby.

Late on Wednesday afternoon, with all tests concluded and determinations made, I was released from my hospital ordeal. It was decided that my syncope episode (that's hospital lingo for "fainting") was caused by a viral illness, i.e. a cold — although I have received plenty of contrary assessments from friends and relatives with no medical background whatsoever. I also have what looks like a zipper running up the back of my head and I still get a little light-headed when I stand up too quickly or change the position of my head. Oh, and I suffered a mild concussion, so that self-diagnosis of "sleeping it off" was probably not a good idea. According to a sign placed outside of my hospital room, I have been labeled a "fall risk." So, there's a burden I must carry with me for the rest of my life. Kind of like "smart ass."

And, I still have that damn cold.

www.joshpincusiscrying.com
Posted by josh pincus is crying at 12:07 PM