eBay, the famed internet auction, is celebrating its twenty-fifth anniversary in 2020. It's hard to believe 28 year-old computer programmer Pierre Omidyar sat in his apartment on Labor Day Weekend 1995 and wrote the code for an online auction, just so he could sell off a few duplicate Pez dispensers he had in his little collection. Or so he says in the company's press release. Actually, that story about eBay's humble beginnings that Pierre has been telling for a quarter-century is total bullshit. But it sure makes the internet auction powerhouse sound... um..... human?

My wife has been selling on eBay for nearly as long as there has been an eBay to sell on. (No, she won't sell your stuff.) Starting off as a supplement to running her parents' general merchandise store, Mrs. P has built her eBay business into just that — a business. She buys, lists, packs and ships merchandise in a regular routine and does it all herself. (I said 'No!,' she will not sell your stuff. Let it go!) 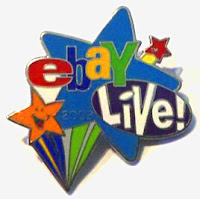 Way back in 2003, when my in-law's store was still operating, Mrs. P was maintaining her eBay business just a few days per week. Still, she was selling a good amount of merchandise. One day, while going through her email, answering questions from potential buyers and sending "end-of-auction" messages to customers, she received an announcement from eBay's headquarters — or so it appeared. She often received bogus emails claiming to be eBay and alerting her to some discrepancy in her account or a similar issue which needed immediate attention. This particular email congratulated her as the winner of a trip to the annual eBay Live! convention being held in Orlando, Florida. She perceived this email as no different from a number of scam offers and announcements she received on a daily basis — so she deleted it. A few days later, she received the same email again. And, again, she deleted it. A third email arrived. This one she read to me and we were treated to a good laugh before this email met the same fate as the previous two.

Then, a week or so later, instead of an email allegedly from eBay, Mrs. P received a phone call from eBay. The nice man on the phone asked my wife why she had not responded to the email about winning the trip to eBay Live! Mrs Pincus laughed and questioned his claim of truly being a representative of eBay. The man on the phone chuckled and said, "Well, I can end all of your auctions, if that'll convince you." She was convinced from the statement alone. He re-sent the email and we read it more carefully this time.

Apparently, because of Mrs. P's stellar selling record, she was awarded "Power Seller" status. All "Power Sellers" would be treated to a two-night stay at the ritzy Peabody Orlando Resort and full admission to the eBay Live! event at the Orlando Convention Center, a three-day celebration of all things eBay, including workshops, seminars and slew of other informative programs we weren't the least bit interested in. The convention also featured a trade show-like presentation floor, where hundreds of eBay associated businesses would be giving away all the logo-emblazoned tchotchkes we could carry. In addition, eBay would pick up the cost of airfare for the two of us. It sounded great, but we really weren't certain this was legit.

We received an official-looking information packet in the mail — allegedly from eBay — including several different release forms — all of which needed to be notarized. We took these forms to a local notary and then sent them back via registered mail. I said, "If this is a scam, at least we're only out the cost of a notary seal and postage."

In a few weeks, we received a bigger packet from eBay that included airline tickets, a hotel voucher and admission credentials for the convention itself. We still weren't convinced. As our departure date drew closer, we packed as though we were actually going on this trip. On the actual day printed on the so-called airplane boarding passes, we drove to the airport, proceeded to the proper gate and, eventually, boarded an Orlando-bound plane. The plane taxied and achieved an airborne state. Mrs P and I looked at each other and decided that we would finally be convinced once we checked in to the hotel.

Well, we landed in Orlando and were shuttled to the beautiful Peabody Hotel. We checked in without a hitch and soon found ourselves smack in the middle of the eBay Live! marketplace. We met and spoke with dozens of eBay representatives and collected free enamel pins to commemorate the event. We were invited to watch then-eBay CEO Meg Whitman deliver her keynote speech — a rousing motivational address that seemed to only be missing a cheerleading squad. When Ms. Whitman completed her oration, the stage was overtaken by the one-and-only Weird Al Yankovic who serenaded the faithful with an eBay parody set to the timely tune of the Backstreet Boys' "I Want It That Way."

The final day of the convention was capped off with an old-fashioned block party, where the inside of the Orlando Convention Center was transformed into a picket-fenced and green-lawned locale of Anytown USA. Grilled hot dogs, fresh popcorn and big, ice-filled tubs of soda were available for all conventioneers. As we strolled about the faux twilight-flecked neighborhood that the good folks at eBay meticulously created, Mrs. Pincus and I were finally convinced that this was on the level.

www.joshpincusiscrying.com
Posted by josh pincus is crying at 7:21 AM