there ain't no grave can hold my body down 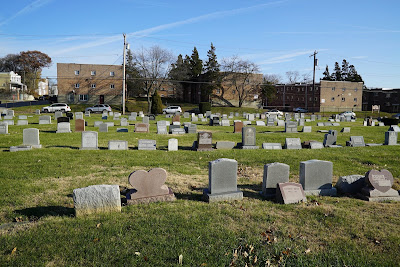 For many years now, I have been traipsing through cemeteries on a self-imposed scavenger hunt for graves of the famous, the not-so-famous and the nearly forgotten. On several occasions, I have dragged my family along, hoping they would share my interest in seeking out the final resting places of celebrities and those deemed "celebrities" by my own definition. More recently, I have found myself wandering alone among the headstones like a mouse hunting down the fermented dairy reward at the end of a laboratory maze.

Now, "grave hunting," as it is known among those within the hobby, is no easy task. It requires a lot of preparation including maps, route plotting, weather conditions, familiarizing yourself with landmarks. I have visited over two dozen cemeteries in various areas of the country, with different levels of success. In some of the largest cemeteries, I have come up empty-handed and just a bit frustrated. It has been my experience that most cemeteries are poorly marked and not accommodating for the living. But, armed with a map and a general knowledge of the headstone I am looking for, I have managed to find nearly all of the graves I have sought. 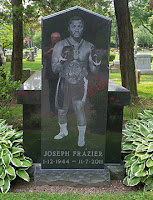 I regularly scan findagrave.com, the indispensable resource for grave hunters worldwide. When planning a vacation, I always check to see if we will be within proximity of a cemetery where some famous folks are buried. In between trips to out-of-town graveyards, I check local cemeteries to see if there are any famous graves I can find without traveling too far. Curiously, I have only made return visits to two cemeteries - both within a few miles from my house in suburban Philadelphia. One is Ivy Hill Cemetery on Easton Road. The first time I was at Ivy Hill was in winter of 2011, just a few days after the funeral of boxing legend Joe Frazier. Ivy Hill is one of those unnavigable cemeteries and I had difficulty finding the former heavyweight champ's grave, as it was not yet marked by a permanent headstone. I revisited Ivy Hill a few weeks ago and happily encountered Smokin' Joe's beautiful black marble etched grave marker and I snapped a few pictures of the striking monument.

Northwood Cemetery, a mere mile-and-a-half from my house, has been my "white whale" for years. Relatively small and haphazardly arranged, Northwood boasts a few forgotten players from the early days of professional baseball, Eddie Griffin, the young NBA forward whose internal demons ended his life in a violent (and most likely deliberate) collision with a freight train and a Civil War Congressional Medal of Honor Recipient. It is also the eternal home of the inventor of rock and roll.

"What?" you're probably saying to yourself. "Wait just a second! Little Richard isn't dead!"  [This story was written prior to Little Richard's passing on May 9, 2020.] Or maybe you're saying "Elvis Presley is buried behind Graceland in Memphis!" Or perhaps you know that Chuck Berry is interred in a stately mausoleum in St. Louis, Missouri. (Maybe you're saying nothing and just wishing I would get on with this story already!) All of these responses are fine, but none of those performers invented rock and roll. I'm taking about Sister Rosetta Tharpe. She is the true creator of the musical genre that we now call "rock and roll." How come you've never heard of Sister Rosetta, as she was affectionately called? Well, because she was a woman, she was black and she was a lesbian — so, as expected, she was unfairly crushed by history and misinformation.

Sister Rosetta began playing guitar as a child, accompanying her mother musically and vocally on the gospel tunes she learned in church. She began to experiment and started infusing Delta blues and New Orleans jazz into the traditional spirituals. She introduced a unique distorted sound on  her guitar,. Although a female guitarist was a rarity at the time, Rosetta was favorably received by audiences and began recording in 1938. 1938!!! Her first record, "Rock Me," was a sly reference to the term "rock & roll," which was a euphemism among the African-American community for sexual intercourse. She released three more "rock & roll" selections and joined up with the Cotton Club Revue, teaming with Duke Ellington, The Dixie Hummingbirds and, later, the all-white Jordannaires, presenting a mixed-race performance that was unheard of at the time. In her technique, you can hear the obvious influence from which both Jimi Hendrix and Prince drew. Rosetta remained popular for years until the fickle public (just as fickle as today's public) moved on to the next sound. But, Sister  Rosetta's spirit weaved its way through rock and roll right up to the present. She was acknowledged as a favorite singer of Johnny Cash and Aretha Franklin. The great Chuck Berry once confessed that his entire career was one long Sister Rosetta Tharpe impersonation.

I knew that Sister Rosetta was buried in Northwood Cemetery, after her untimely passing following a stroke on the eve of a recording session in Philadelphia in 1973. Her grave stood unmarked for decades until a fan-based fundraiser purchased and installed a headstone in 2008.

A headstone that eluded me for over a year.

I drove through the narrow, winding paths at Northwood last March. I slowly passed the vast plots of graves, unrealistically expecting that elusive rose-colored granite marker to be enveloped in ethereal light, guiding me like the Star of Bethlehem. Of course, nothing close to that occurred. Instead, I circled that place a dozen times, reading the same names from the same path-side headstones on each subsequent lap. I finally gave up... only to return a few months later and re-enact the exact same procedure. I left that time feeling just as defeated. However, this week, while scrolling through Twitter, I came across a post — a retweet, if you will — from someone I do not follow. This person, @jeopardista, showed a picture of Sister Rosetta Tharpe's grave marker along with a sentiment from British singer-songwriter Frank Turner. The photo seemed to taunt me and I swear I heard it say "You can't find me!" in a high-pitched, sing-song voice. I immediately typed out a reply to @jeopardista, asking for some direction or at least an identifying landmark to help bring my quest for the grave of Sister Rosetta Tharpe to a successful close. My new Twitter acquaintance replied within a few minutes, directing me to the proper cemetery entrance, which way to turn and the approximate location of the rose-hued monument near the wrought-iron fence that skirts nearby 70th Avenue. 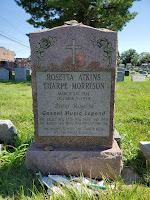 I hopped in my car and quickly drove over to Northwood. Following @jeopardista's instructions, I made the first left inside the 15th Street entrance. I traversed the rolling expanse of grassy areas until I spotted some familiar trees and then I saw the sign identifying 70th Avenue peeking though the posts of rust-speckled iron. I parked my car and walked with a determined gait towards the edge of the cemetery ground, the gleam of rose-colored granite just ahead. Excitedly, I approached the front of the headstone and, as I readied my cellphone's camera to capture photographic provenance, I read the sand-blasted inscription. It said something other than "Rosetta Tharpe." I frowned. I looked around. To my left. To my right. Behind me, two or three rows away, I noticed the back of another, similar-looking stone. I headed in that direction. This time, the block letters — Rosetta Atkins Tharpe Morrison — proclaimed this to be the correct grave. The end of my pursuit. My mission accomplished. I snapped four, almost identical photos, changing my angle ever-so slightly with each ensuing shot. But I did stand and look at the grave and marker for a good long time before heading back to my car.

I posted one of the photos to Instagram, along with a fairly lengthy explanation as to Sister Rosetta's significance. Over the course of the day, the photo attracted 29 "likes" including several members of the Philadelphia (and beyond) music community. That made me happy.

Plus, @jeopardista started following me.

(Here are some of my other cemetery adventures.)

www.joshpincusiscrying.com
Posted by josh pincus is crying at 6:59 AM