i don't want to die in the hospital 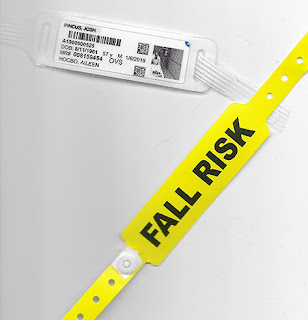 Well, it happened to me again.

I spent last weekend in a hospital after, once again, experiencing what has been identified as a "vasovagal syncope." Since I missed that course in art school, I had to read up on and familiarize myself with vasovagal syncope. It means that I have a tendency to pass out unexpectedly and at the most inopportune times (as though there is the perfect time for losing consciousness). Saturday evening marked my fourth episode in twenty years – all occurring under vastly different circumstances and all ending with me in the hospital.... actually four different hospitals.

This time, I was enjoying dinner with my wife and her brother's family in the Waterfront Buffet at Harrah's Hotel and Casino in Atlantic City. Mrs. Pincus and I had frequented this particular buffet quite often when my wife was on the good side of Harrah's marketing department. Lately, however, they must have switched how player algorithms are interpreted and she was unceremoniously cut off from all benefits the casino previously offered. There was a brief flurry of promotion offered in the summer of 2017, but it was fleeting and, by Labor Day, the short-lived party was over. But as 2018 wound to a conclusion, a booklet from Harrah's arrived in the mail and a month's worth of (minimal) "free slot play" and four weekly gifts were offered to Mrs. P for the month of January. Plus one free buffet.

We redeemed the buffet voucher on Saturday, never expecting to end our meal with me being escorted out of the place on a gurney, surrounded by EMTs and a half dozen electronic leads taped to my chest.

Comedian Rich Hall once observed that he never saw more broken glass anywhere else in the world than in Atlantic City. In the spaces between the glitzy casinos, Atlantic City is a sad little town. It's like an old hooker – once glamorous and appealing, but now doleful and broken after years of use, its beauty now faded. (I have used the same analogy for Fremont Street in Las Vegas.) So, you can only imagine what a hospital in the heart of the Atlantic City casino district is like. That's where I was taken. I didn't have to imagine.

After being prodded and poked for a few hours in the emergency room of Atlantic Care Hospital (on the world famous Boardwalk, next to Caesars Casino), my second gurney of the evening was wheeled up to the fourth floor of the Heritage wing at 2:30 in the morning. The room was dark and I wasn't wearing my glasses, but I could make out that there was someone in the first bed in the room. The nurse drew the curtain between the beds and divided the room in half. Feeling much better, I lifted myself into the bed. The nurse adjusted a pillow behind my head – and then jabbed a needle into my left arm to attach me to an IV drip. She left and returned with my wife, who had been told to stay at a nearby waiting area until I got "settled." (I think that means "until I had another needle jabbed into me.") With our car back in Harrah's parking garage, Mrs. Pincus would be staying the night with me. The nurse asked the man in the first bed if it was okay and he grunted his approval through his slumber. Mrs. Pincus sat in a recliner that was already in the room and tried (unsuccessfully) to get comfortable. I, too tried to get comfortable, but was awakened several times to have my blood pressure checked and to dispense a vial or two of blood for the lab.

When the Sunday morning sun shone through the window, the real fun began. My "roommate" was visited by a parade of medical staff. With every new technician, doctor, nurse, therapist, food service worker and nurse practitioner, he became more agitated, annoyed and, eventually, combative. He dismissed every single suggestion, recommendation and diagnosis that was offered. He argued with every one and demanded to be discharged. Between visits from medical staff, he engaged in venomous conversations on his cell phone. I tried not to listen, but he was just a foot or two away, behind a thin cloth curtain, so I heard nearly every word. He spat phases like "They don't know what the hell they're talking about!" and "I'm getting the hell out of here!" The volume on his cellphone was turned up high and he had some sort of "speech-to-action"  function turned on, so, every so often, we heard an electronic female voice intone "HOME SCREEN" and "CALLING DAUGHTER." And it also phonetically recited each letter as he punched out a text message. After a while, my "roommate" got dressed, argued with the attending nurse, who repeated to the patient that he would be leaving "AMA" (against medical advice). My soon-to-be-ex "roommate" waved the nurse's pleas off and stormed out of the room. The nurse sighed and came over to my side of the room to take my blood pressure. As he wrapped the cuff around my upper arm, he informed my wife and me that the guy is a regular visitor and he would return within this week. 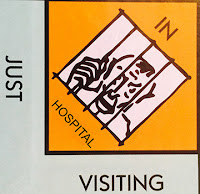 The bed was empty for a few hours until another man was brought in. This man also argued with treatment, dismissed diagnosis and complained about those who were there to help. There was also a lengthy discussion about the color of his urine, which I could have done without.

I suppose hospital visits are a by-product of getting older. I went for almost fifty years between stays, but recently, they are coming closer together. One doctor – a cardiologist who told me I could save money by purchasing henna hair dye in a Indian grocery store – offered some words of encouragement, though. He said if, Heaven forbid, I do pass out again, a call to 911 is not really necessary. Especially if the episode only lasts under thirty seconds and I rebound very quickly.

Hopefully, I have had my last trip to a hospital.

www.joshpincusiscrying.com
Posted by josh pincus is crying at 7:45 AM