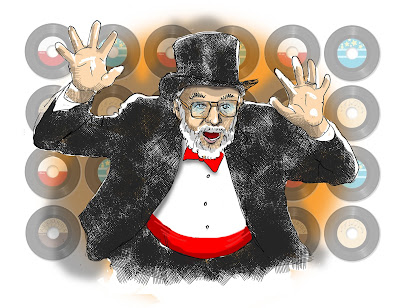 I have suffered from a condition for over forty years. but I was finally able to get an appointment to see the doctor.

One Sunday evening, just before I started high school, I discovered something unusual while listening to the radio. As a fourteen-year old, well versed and totally immersed in the world of Top 40 Radio, I stumbled upon some strange sounds emanating from a station just a little up the FM dial from WIFI-92, a Philadelphia Top 40 station masquerading as a cool FM station. It was on 94 WYSP, an album-oriented rock station my older brother listened to, that I heard the quirky DJ with the even quirkier voice, introduce "Transfusion" by one Nervous Norvus. This tune, one I had never heard before (I would later find out it was originally released in 1956, five years before I was born.), was an echo-y, sinister-sounding recitation with vague musical accompaniment, filled with the gut-wrenching sounds of a car crash and lyrics coolly describing the aftermath of reckless driving habits with rhymes like "Pour the crimson in me, Jimson." It was awesome. Next was another gem of weirdness called "Fish Heads," a nonsensical ditty chock-full of non-sequiturs, performed by Barnes and Barnes (Brothers Art and Artie, later revealed to be songwriter Robert Haimer and actor/singer Bill Mumy, best known as "Will Robinson" on TVs "Lost in Space"). For two hours, I sat transfixed as the DJ — Dr. Demento, as he called himself — assaulted the airwaves with the likes of "I Want My Baby Back" by Jimmie Cross, "The Battle of Kookamonga" by Homer and Jethro and "Leader of the Laundromat" by The Detergents (another group fronted by prolific vocalist Ron Dante, the voice of The Archies, The Cuff Links and producer of the first nine Barry Manilow albums). He even played "Monster Mash" and it wan't anywhere near Halloween. Later in the program, I heard Spike Jones and his City Slickers, a band with whom I was familiar from a stack of thick 78s my mom used to play. Much to my amazement. Dr. Demento also spun tunes by Allan Sherman, a singer of song parodies I also knew from my parents' record collection.

I was dizzy with excitement, hopeful that this was not just a one-time broadcast. When the show concluded (with a Top Ten countdown that crowned "They're Coming to Take Me Away, Ha-Haa!" by Napoleon XIV [the stage name of Philadelphia singer/songwriter/producer Jerry Samuels] as this week's "Number One Most Demented Song"), the good Doctor invited listeners to tune in each and every week for more demented songs. As I listened to the crackly tones of "Cheerio, Cherry Lips, Cheerio," the closing theme originally recorded in 1929, I knew I'd be in the exact same spot the following week — and for many, many weeks to come.

Eventually, WYSP stopped carrying the syndicated broadcasts of the "Dr. Demento Show." It was around the time my musical tastes began to expand. However, I still kept a soft spot for novelty records. I was a big fan of They Might Be Giants, who — let's face it — are just a good old-fashioned novelty act with wide appeal. I bought early albums by Barenaked Ladies, a group of Canadian popsters who mixed songs like "Be My Yoko Ono" among their dreamy ballads and upbeat rockers. And, of course, I loved Weird Al Yankovic, himself a Dr. Demento discovery.

When my son was growing up, we listened — as a family — to a call-in show for kids on Philadelphia public radio station WXPN. The host, a jovial and endearing woman named Kathy O'Connell, carried the Dr. Demento torch as she peppered her show with tracks by Weird Al, Allan Sherman and her personal favorite, TV pioneer Soupy Sales — introducing a new generation to these timeless "classics" of a bygone era. I was so excited to hear these songs again to share them with my young son, telling him about Dr. Demento as we listened. My son got a kick out of the novelty songs, too.

Which brings us up to the present. My son, now 30, works at WXPN. In addition to his own on-air shifts, he serves as the engineer for Kathy O'Connell's show, which, three decades later, is still going strong. Just this week, I got word that the actual, real-life Dr. Demento would be paying a visit to Philadelphia to speak with Kathy as part of Kindie Comm, an annual event focusing on the independent kids' music industry. The good Doctor is also promoting the release of a 2 CD, thirty-track tribute to the beloved songs made popular on his show — all performed in a punk rock style by noted bands of the genre. My son, now a certified radio "insider," was good enough to slip me in during Kathy's Q & A session with Dr. D and John Cafiero, his cohort and collaborator (conspirator?) on the compilation. Dr. Demento was positively fascinating. He is a gentle, soft-spoken, if somewhat befuddled, man — now in his late 70s — with an encyclopedic knowledge of names, dates and participants in the music and radio industry going back to the first time Guglielmo Marconi stuck two wires together. The audience — made up in part by singers and songwriters who were heavily influenced by the songs they heard on Dr. Demento's show — were held spellbound by tales of Benny Bell and Freddy Martin (AKA Felix Figueroa) that Dr. Demento spun. Afterwards, a lengthy queue of devoted fans aching to meet their musical hero formed in the venue's lobby. I numbered myself among them.

I came prepared with a drawing I did of the good Doctor for the good Doctor — two copies; one for him and one for me. When it was my turn (I was second in line), I shook the Doctor's hand and presented him with my drawing. He smiled and asked If I drew it. I modestly answered in the affirmative and he told me that the cover of his first compilation album (released in 1975 - he released 17 more since) was drawn by a fan of the show. Then he scrawled his signature across the bottom of my drawing and graciously posed for a photograph. When I posted the photo on social media, my connections came out of the woodwork to tell me how jealous they were that I got to meet Dr. Demento,

I felt like fourteen-year old me who was hearing Dr. Demento for the first time.

Posted by josh pincus is crying at 7:48 AM