get it right the first time An historical event took place last Sunday, February 4, 2018. Sure, the Philadelphia Eagles — those scrappy, but determined, "underdogs" of the National Football League — defeated the mighty (and mighty arrogant) New England Patriots in a gripping Super Bowl LII, loosening the Pats' "New York Yankees"-like stronghold on football championships. It was a terrific game (I'm told) that shattered all sorts of league records (I'm told), in both regular and post-season play (I am also told).

You see, the Super Bowl is not the historical event which I referenced in the opening sentence, although it is closely related. Sunday — Super Bowl Sunday —  marked the first time I ever watched a complete football game. Ever.

I grew up in a house with two die-hard sports fans. First, there was my dad. He was the typical fair-weather fan. My dad was born in West Philadelphia (42 years before the Fresh Prince was shootin' some b-ball on the playground of Overbrook High) and loved the Phillies as a kid. As an adult, he loved to tell a tale of how he cut school to see his beloved Phils play in the days before illuminated night games. He claimed to have seen a rare no-hitter and couldn't tell anyone because he would have gotten in trouble for blowing off classes. It was a great story, but a little research revealed that my dad made the whole thing up... 'cause that's what my dad did. My dad loved watching, reading about and talking sports — baseball, football, basketball and even wrestling, if that is considered a sport. (But not hockey, because, as he often explained, "it moves too goddamn fast for me.") His attitude towards all Philadelphia teams was "Love 'em when they're winning; hate 'em when they're losing." He would often holler "You lousy bums!" at a television broadcast of an Eagles or a Phillies game, only to change his tune when the score turned in the home team's favor.

The other sports fan I shared my house with was my brother. Four years older and way more athletic than I (in fairness, there is furniture that is way more athletic than I), my brother lived and breathed sports — all sports — hockey and wrestling included. My brother was more of a student of the game. Not to say that he couldn't give his peers a run for their money in his playing prowess, but he loved stats and comparisons and probabilities and theory and speculation, in addition to savoring each moment of each game he watched. My brother analyzed and reanalyzed plays and suggested alternative moves that could have been attempted, while my dad just sucked down the nicotine of one Viceroy after another and cursed. 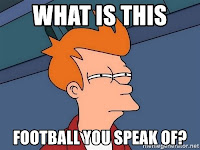 Needless to say, my dad and my brother butted heads and did so quite often. I overhead many of their heated game day disagreements from the safety of my upstairs bedroom, where I busied myself with drawing, consciously avoiding their confrontation and their sports. I wanted nothing to do with their arguments and I especially wanted nothing to do with their stupid sports. I didn't understand it. I didn't see the entertainment in it. I just didn't get it. Games were always on in my house. And I never watched any of them. Even when cartoons were snapped off (without asking) by my father in favor of some sporting event, I just left the room with no interest in the ensuing contest. Yeah, I went to a few baseball games with my family, but I didn't pay attention to the game. Instead, I watched the guys selling pennants and popcorn and marveled at the size of Veterans Stadium. I went to one hockey game and one basketball game when I was in high school and neither event made an impression on me (I remember the hockey game was cold.)

I did, however, number myself among the crowds at two parades honoring back-to-back Stanley Cup wins by the 1974 and 1975 Philadelphia Flyers — the infamous "Broad Street Bullies." I went to the parades, but I didn't watch a second of any game — regular season or playoffs. Five years later, I blew off a day at art school while the rest of the city was celebrating the Philadelphia Philles' 1980 World Series Championship. I had worked as a soda vendor at Phillies games in '77, but most of the time, I had no idea who they were playing. When the Phillies came up victorious at the end of the 2008 World Series, I watched from the middle of a cheering crowd, as the celebratory parade passed by my office building — then went back to work when the last parade vehicle was a dot in the distance.

This year, I was dimly aware of the buzz the current Philadelphia Eagles team was creating. I read the news. I keep abreast of current events. Living in Philadelphia, it was kind of tough to avoid. As the 2017-2018 season went on, the focus on the Eagles moved out of the "sports" portion of nightly newscasts into the "top story" slot. One Sunday evening, I was quite surprised when my wife, who I thought was just working in the third-floor office in our house, came downstairs to tell me she just watched the end of the Eagles-Vikings game and now she was looking forward to watching the Super Bowl. "What? Football? In our house?," I questioned, as I looked up from an Andy Griffith Show rerun flashing across the 43-inch television screen in our den. But, just two weeks later, there we were, with folding snack tables set up in front of the TV and big bowls of homemade chili steaming before us — I was about to watch my very first football game. 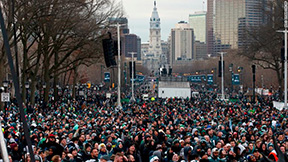 And watch it I did. Every minute. Every time-out. Every kick-off. Every pass. Every field goal (and the missed ones, too). Every tackle. Even that dreadful half-time show. I watched. Aside from the basics, like a guy carrying the ball into the area painted with a team's logo means a six-point touchdown and a kicked ball sailing through the goalposts means... um... some points, but not as many as a touchdown, I had no idea what was going on. I don't know what an "offsides" is... or are. I don't know what any of the penalties mean. I don't know where "the pocket" is. (I know it's not on any of those tight pants the players wear. Maybe it's near "the crease" in hockey.) Despite my lack of knowledge of the fundamentals of this game, almost immediately, I was able to assess that the Eagles (in green uniforms) were definitely outplaying the Patriots (not in green uniforms). And in the end, I was right. I even found myself getting a little excited and emotional towards the riveting final moments. When the game was over and elated Eagles players climbed all over each other in celebration of winning their first Super Bowl (an accomplishment made sweeter by their besting the five-time champion Patriots), I could hear firecrackers exploding right outside of my suburban window. As I write this piece, the live broadcast of the Eagles parade is on a television screen just a few feet away from me. Every so often, I glance up from my keyboard to see a sea of (an estimated two million) joyful fans flooding the streets of my hometown and to hear a beefy player (that I cannot name) screaming about bringing the Lombardi Trophy to Philly. I love this city and I am happy for the Eagles' success. Unfairly derided, these guys rose to the challenge and delivered for their fans. Looking back, I really enjoyed watching that game. It was stirring and its aftermath was even a bit inspiring.

Last Sunday — February 4, 2018 — was historical in one more respect. It also marks the day I watched my last complete football game.

Posted by josh pincus is crying at 8:04 AM