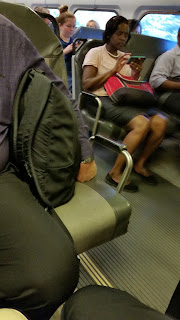 I just caught the late 4:45 train for my evening commute home.

SEPTA's train service (Southeastern Pennsylvania Transportation Authority) has been running poorly all summer. In 2006, SEPTA purchased one hundred and twenty. brand-spanking-new new Silverliner V railcars for two-hundred and seventy-four million dollars. The cars were manufactured by the relatively-young Hyundai Rotem company of South Korea. SEPTA chose to purchase the cars based on Hyundai Rotem's undercutting all of the competition. The train cars experienced massive delays in production and delivery. But, better late than never, the cars were finally delivered and soon were gliding on the rails all over Philadelphia and its suburbs.

A routine inspection discovered numerous fatigue cracks on the support trucks of every single Silverliner V in SEPTA's system. The beautiful new trains were immediately pulled from service and SEPTA began a frantic scramble. Timetables were altered, trains were borrowed from neighboring cities and delays were insufferable. All summer long, daily commuters have experienced nightmares in travel time and over-crowded train cars. SEPTA employees have been extra surly and belligerent. Another bonus to make the experience even more pleasurable.

If you follow my Instagram account, you know that it is chock full of pictures of people taking up more than their fair share of allotted space by placing their bags, backpacks, briefcases, food or any number of other items on the empty seat next to the single seat that their fare permits them to occupy. SEPTA has introduced the "Dude, It's Rude" initiative, reminding riders that one fare entitles them to one seat. Most people ignore the rules. Some even get testy when asked to move their stuff to accommodate another passenger. The policy is not remotely enforced by SEPTA on-board employees.

Now, with over-crowded trains, seats are at a premium. Yet, I still see many commuters spread out across two, or sometimes three, seats with their personal effects.

Today, on my ride home, I was joined by a man in the seat facing mine. With my messenger bag perched squarely on my lap, I silently read my book until the train pulled up into my station. This gentleman, my seatmate, sported a SEPTA employee badge dangling from a SEPTA lanyard around his neck. He wore a dark dress shirt and an expensive looking tie. This let me know that he was not a rank-and-file "train guy." This guy was a "main office executive" type. No sooner did this guy plop himself down in the seat opposite me, his knees bumping into mine, did he drop his bulky backpack on the empty seat to his left. He absentmindedly draped his beefy arm across the bag, blocking any access for another commuter to take a load off. He pulled a cellphone from his pocket and squinted as he thumbed the screen.

A representative of SEPTA blatantly breaking the rules that his company introduced. Average commuters are expected to follow the rules. SEPTA employees, especially the upper echelon, should lead by example, especially with limited seating available. I looked around and noticed there were people standing in several places throughout the train, gripping handrails and seat backs to steady themselves.

Disgusted, I rose from my seat as the train approached my stop. I grunted an "excuse me" and the guy swiveled his knees to make an exit path for me.

I stepped on his foot on my way out.

www.joshpincusiscrying.com
Posted by josh pincus is crying at 7:50 AM