I have been collecting autographed photos of "celebrities" for over twenty years. My collection includes some famous names, like Tom Hanks, Charlton Heston and Gene Kelly. But, It mostly consists of mid- to low-level actors who were most famous for a single role on a long-forgotten television program or film. To get these inscribed photos, I have attended numerous collector shows and conventions. You know the type. They are usually themed to one specific interest, like baby boomer, science-fiction, or even as ultra-specific as Star Trek. They are usually held at a large hotel and spread out among several ballrooms and meeting rooms. The rooms are filled with vendors offering everything from T-shirts and DVDs to custom artwork and figurines. Some of the larger conventions encourage attendees to come in costume. But the draw for me is the roster of celebrities that have been contracted to sit behind a table laden with stacks of glossy pictures, a few vintage posters and perhaps even a thin, bound memoir — all waiting to be inscribed and personalized for a paltry sum (a sum that has escalated at a steady rate in twenty years time).

After a three year absence, I attended the Monster-Mania Con in nearby Cherry Hill, New Jersey. I used to go to this biannual event regularly, despite a steep admission fee that grew steeper with each subsequent show. I was never particularly interested in the items for sale in the vendor rooms, although I would always stroll through the packed aisles to peruse the wares. I was there solely for autographs and to spend a few minutes with someone who I had only seen as image flickering across a movie or TV screen.

Until Christopher Lloyd ruined it for me.

Mr. Lloyd, the Emmy Award winning actor equally recognized for his roles as "Reverend Jim Ignatowski" on Taxi, "Judge Doom" in Who Framed Roger Rabbit? and "Doc Brown" in the Back to the Future trilogy, made an appearance at Monster-Mania three years ago, This was a pretty big coup for the promoter of the long-running convention and I was anxious to meet Mr. Lloyd and add his photo to my collection. I lined up at his table behind a dozen or so other fans. When I got close enough, I selected a photo — a close up of Christopher as "Doc Brown" with a large, geometric contraption on his head. A man seated next to the actor informed me that a signed picture would set me back sixty bucks. Holy shit! When I started my collection, pictures with a signature and a bit of quality time with the signer cost ten dollars. (Actually, Butch Patrick, child star of The Munsters, charged a five-spot and Mrs. P and I were the only ones there to see him.) For a long time, the going rate rose to — and then stayed at — twenty dollars. Lately, most celebrities charge thirty, with a select few (with bigger egos, no doubt) asking forty. But, sixty dollars! That was just ridiculous. I flip-flopped on a decision in my mind a few times until I fumed and reluctantly handed over three crumbled twenty dollar bills. When I approached Mr. Lloyd, I smiled and said, "Hi. I'm a big fan. I loved your work in Roger Rabbit and Back to the Future." — gushing like a giddy teenager. He didn't even look up. He just quickly scrawled his name across the lower portion of the photo, smearing the "C" in the process. I thanked him and he still offered no reply. Not a word. I thought, "You son of a bitch! Sixty bucks to write your fucking name and you can't even muster a 'Hi?' What an asshole." I was done with this show. It was expensive. It was crowded. I have to park a mile away because the tiny hotel lot fills up quickly. I just wasn't enjoying myself anymore.

However, I still continued to check the list of guests for upcoming Monster-Manias. When the new guest list was posted for Monster-Mania 34, I decided to put my grudge on hold and go back one more time. But this time, I'd go about it differently. First, I went on a Sunday, the final day of the show. It was also only twenty dollars to get in — ten dollars less than the previous two days. Next, I got to the hotel an hour before the show opened. It was great. I had my choice of parking spaces. Once inside and in the lobby, I watched the hotel staff marvel at the costumed, mohawked and heavily-tattooed attendees milling about. When the not-so-friendly staff dropped the velvet rope and the show officially opened, I headed straight to the autograph room where the "celebrities" were just arriving at their tables, unpacking their Sharpies and setting up their photos. There were no crowds, no hassle and no lines. 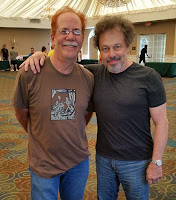 I walked right up to Curtis Armstrong, best known as "Booger" in the 1984 college gross-out Revenge of the Nerds and several of its lesser sequels. However, Curtis is also considered one of the world's leading authorities on the music and career of late singer Harry Nilsson (he of "Without You" and "Everybody's Talkin'" fame). Curtis even wrote the liner notes for a series of Nilsson album re-releases. Curtis was casually chatting with a young lady seated next to him at his table. I approached and selected a photo. I then told Curtis of my own fondness for Harry Nilsson's music. He lit up, happy for a conversation that wouldn't include misquoted dialog from the Nerds films. We spoke briefly about the career of the singer, sharing our preferences for individual songs. He inscribed my photo "From one Nilsson fan to another" and capped it with his swashy signature. He graciously posed for a picture with me. I thanked him and headed straight across the still sparsely-populated room. 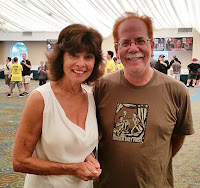 My target was Adrienne Barbeau. She was the reason I decided to temporarily shelve my boycott of Monster-Mania. I wrote about Ms. Barbeau a few months ago, after Mrs. P and I saw her in a production of the Broadway musical Pippin, so I will try to keep my gushing to a minimum. I have met a lot of celebrities over the years, and while it is always a pleasure (and sometimes a bit of a thrill) to meet someone you've only seen on TV or the movies, there are a few that fall into the category of very cool. Julie Newmar, Shirley Jones, Patty Duke and Karen Valentine come to mind. Adrienne Barbeau now tops that list. I patiently waited for Ms. Barbeau to finish a conversation with two fanboys toting an over-sized poster from the 1982 horror anthology Creepshow. I could not take my eyes off of her. It was one of those surreal moments. Sure, it was pretty cool seeing her as a tiny speck on the distant Academy of Music stage in February, but now here she was, less than two feet away. At 70 (you read that right), she still looks awesome. The fanboys moved on and Adrienne turned to me, greeting me with a big smile and an even bigger "Hello." Trying to gather my thoughts and to not sound like a blithering idiot, I told her that I was a long-time fan and that my wife and I enjoyed her performance in Pippin. Her broad smile broadened. An expression came across her face that said: "Finally! Someone wants to talk about something other than The Fog or Swamp Thing." I gave her a drawing I did of her and Maude co-star and mentor, the late Bea Arthur, along with a couple of Josh Pincus pinback buttons (available HERE.). She was intrigued and asked about the story behind "Josh Pincus." (Oh, there's a story, all right.) She laughed at my little story. I asked if I could get a photo with her and she happily obliged. She got up and came around the table, positioning her small frame close to me. Her assistant snapped off a couple of shots on my cellphone. I thanked her and she thanked me for the buttons and the drawing. 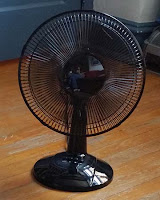 The room began to fill up and a line began to form for Tara Reid, star of the recent campy phenomenon, Sharknado (and its sequels). I had been here for an hour already and Tara was a no-show. I scanned the room and didn't recognized any of the other "celebrities" offering signed pictures and face-to-face time. I mean I had never heard of any show or movie they "claimed" to be representing. Figuring Tara Reid was not worth my time or another thirty bucks, I started for the exit.

Philadelphia is smack in the middle of a relentless heatwave, with temperatures in the high 90s, coupled with oppressive humidity. So, on my way home, I purchased a 12" oscillating fan for half the price of an autographed picture.

It was a good day all around.

www.joshpincusiscrying.com
Posted by josh pincus is crying at 6:08 AM