rum, sodomy and the lash 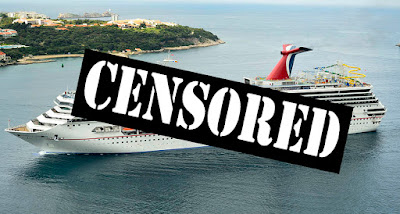 Remember that contrasting scene in James Cameron's Titanic when Rose's family was elegantly enjoying a dignified tea on the top deck of the fated ocean liner while Leonardo DiCaprio and his grimy comrades, confined to the lower bowels of steerage, partied their asses off with steamy dancing and readily-flowing liquor?

Mrs. Pincus and I just returned from our fourth cruise together in as many years. She had taken a cruise five years ago with her family and members of her sister-in-law's extended family. I maintained that there wasn't a ship big enough to get me to accompany that crew, stuck in the middle of the ocean for eight days. Besides, I don't recall being invited on that trip to begin with.

Just as I predicted after my first cruise, all cruises are pretty much the same. Sure there are some slight differences — different people, different ports (although our first three cruises had the exact same itinerary) — but, for the most part, the basic experience is the same. You eat, you lay out by the pool, you see a depressed Caribbean city, you eat some more, you see a hokey show, you eat.... well, you get it. It's not a bad time. It's just the same time. This is what happens when you take a cruise. Just like this is what happens when you go to the dentist. You sit in a chair. Your teeth get poked at. You get it.

So, I was convinced that the "cruise experience" is similar from one trip to another, from one cruise line to another. My beliefs were seriously altered, however, when Mrs. P and I innocently wandered into a darkened nightclub aboard the Carnival Sunshine on our second day at sea. The late evening event was billed in the daily "Fun Guide" schedule as "Karaoke (18+)." It was a deceiving description considering what was transpiring. Sure, we had watched karaoke on other ships. Hey, we even participated a few years ago, nearly clearing the room with our gut-wrenching (and ear-splitting) rendition of Marty Robbins' classic cowboy ballad "El Paso." But, this particular evening, we were merely observers... and "observe" we did. We took a cozy seat in a curved, padded booth several rows from the small stage. The DJ was already calling the name of the next karaoke performer. A young lady approached the microphone amid a barrage of whoops and hollers from a stage-side table jammed with her travelling companions. The prerecorded music began and she belted out a horribly off-key take on Mary Wells' Motown classic "My Guy." Despite her cacophonous performance, the crowd ate it up, especially when she punctuated the song's rhythmic back-beat with a series of pelvic gyrations and suggestive shimmying. When the song concluded, the audience erupted in cheers and accolades, not unlike a Sunday service at an AME church. (Can I get a "Hallelujah?") She was followed by another woman who offered her version of the late Whitney Houston's "I Wanna Dance with Somebody," complete with the same provocative repertoire of physical alacrity. Midway through the song, a young man joined her onstage, draping a lanky arm around her shoulders. He pressed himself close to the singer and began nuzzling her neck. The air was filled with primal catcalls and unintelligible chatter. Each subsequent amateur performer was equally as titillating and was cheered with equal salaciousness. The evening climaxed with a foursome of young men delivering an unrecognizable tune (unrecognizable by me and the missus, anyway), one of whom bestowed a personal lap dance to a woman in the front row — a woman old enough to be his mother. Actually, it may have been his mother. The DJ thanked all the participants, as well as the audience, and everyone grabbed what was left of their drinks and filed out of the club. My wife and I exchanged puzzled glances. It was as though we were at a party, but weren't on the guest list. We weren't shunned or told to leave, but, we were not overtly welcomed either. We were just, kind of, ignored and left to ourselves, even though we were in full view of everyone. It was a very odd and palpable vibe.

A few evenings later, we spotted another late-night, adults only event cryptically listed as "Carnival Quest" on the schedule. Angelo, a very friendly member of the ship's entertainment staff, encouraged us to come to "Carnival Quest," but recommended, as first-timers, that we watch rather than participate. It turns out that "Carnival Quest" is merely a risqué Scavenger Hunt, and, judging from the throng of eager participants, it's quite popular and very familiar to regular "cruisers." Before beginning, the room was carefully scanned for anyone under the age of eighteen. Those not meeting age requirements were promptly shown the door. Then, the host divided the anxious group into teams and distributed laminated cards displaying each team's number. He announced that there would be a series of challenges, with the winning team awarded a fabulous prize. (As we learned, a "fabulous prize" on a Carnival cruise ship is a plastic trophy and a bottle of the worst champagne available.) The host also warned that those who may be offended by foul language and the occasional exposed body part should exit the nightclub at this time. Everyone laughed and no one left.

The first challenge was easy and innocuous. The elected captain of each team had to present a passenger ID card with a "B" muster station. (For those who have never taken a cruise, your vacation begins with a lifeboat drill prior to launch. Passengers gather at various designated points throughout the ship. These places are known by the nautical moniker "muster stations." Anxious and somewhat annoyed passengers stand around and watch crew members in colorful vests scramble about with clipboards and whistles until they are given the "all clear." At this point, drinking promptly resumes.) So, team members produced their individual IDs until they found one labeled "B." The entries were counted and the next challenge was announced. This was where things began to take a turn. A male member, selected from each team, must present himself front and center... dressed as a woman. Mrs. P and I noticed things were getting a little weird. We saw a few girls around the room remove a lacy sweater or a pair of high heels and force those articles on to a giggling male teammate. Other women, however, brought extra clothing — bras, jewelry, boas — with them. Within minutes, seven men were paraded around the room, all sporting some sort of women's wear. All — I repeat: all — were wearing bras on the outside of their clothing. The non-participating audience was in stitches, as it was quite a sight to see. It was unlike anything I had seen on three previous cruises. The next challenge was the opposite of the previous one. A female teammate was to be clad in men's clothing. The same amount of clambering took place, as petite young ladies were fitted with baseball caps, sunglasses and oversize T-shirts. One imaginative girl jammed an aluminum beer bottle into the crotch of her shorts to give the illusion of an erection. It was truly inspired. The next task was to show the host an X-rated photo on a cellphone. A few teams began scrolling through the gallery of digital images stored on their phones. Others began shoving their phones into their pants and snapping off a few quick shots.

The final two challenges were the most outrageous of all. One was an ass-shaking competition ("twerking" as it has come to be known) followed by a recreation of your favorite scene from your favorite pornographic film. Considering that most teams were comprised of total strangers, inhibitions took a back seat. Music blared and asses shook. A lot. An awful lot... until, after intense deliberation over each trembling posterior, an impartial squad of judges chose a winner. Then troupes from each team assembled and, while remaining fully clothed (for the most part, although a couple of women quickly discarded their tops, comfortably performing their scene in just a bra), fondled and spanked and whipped and kissed and bumped and ground into each other  — male, female, old, young. There was plenty of uninhibited, although simulated, (as far as I could tell from my vantage point) fellatio and cunnilingus and even a few depictions of sodomy and bondage. Several teams sent only male participants or only female participants to perform  — much to the delight of the audience. One extremely creative team enacted their version of the cult horror film The Human Centipede*. Hundreds of cameras snapped pictures and cellphones captured video that would be uploaded to YouTube as soon as a strong (and free) WIFI signal was available. It was unbelievable.

When it was all over, winners were crowned, prizes were distributed and the teams were lavished with wild praise. Mrs. P and I were bewildered. Up to this point, we thought we had seen everything there was to see on a cruise ship. We discovered that there was more to cruising than just deck chairs and an endless buffet.

*Don't search this at work.

www.joshpincusiscrying.com
Posted by josh pincus is crying at 7:50 AM