my milkshake brings all the boys to the yard 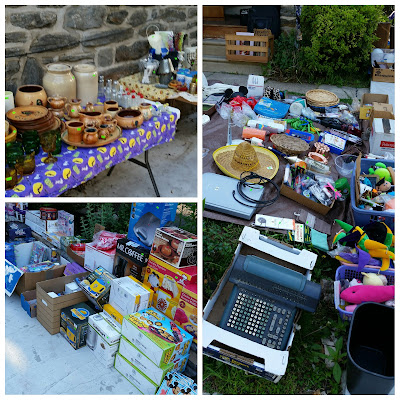 After much preparation, we had another yard sale at Chez Pincus this past weekend. In the days and weeks prior, a diligent and determined Mrs. Pincus gathered loads of items that she deemed no longer worthy of the Pincus Home Collection. The various household cast-offs were combined with a selection of surplus items from my wife's eBay store and the whole lot lay in silent repose until early Saturday morning, when we dragged every last piece out on to our front lawn and newly-paved driveway, where we arranged everything into a pleasing display. Pleasing enough to entice someone to get this stuff out of my life once and for all.

The weather was on our side that day and the crowd was fairly steady, thanks to (no lie!) three hundred signs we stapled onto nearly every utility pole in our neighborhood. Mrs. P, wrapped up in her "I mean business" change apron, performed a nimble retail ballet, as she flit from one customer to another, answering questions, making change and — cha-CHING! — moving merchandise.

During the course of the day, I mostly just sat on my ass and watched. After emptying my living room and dining room of the piles of assorted "treasures," I decided that the actual sale was best left handled by my spouse, with her sharp business prowess and sweet interpersonal skills — two qualities in which I am sorely deficient. So, I sat. With a big cup of coffee in my hand, I parked myself on the edge of my porch and sat.

Although I was content to sit silently, I knew that, since this was my house, I would be called upon to answer some questions about the items strewn about my property. So, unavoidably, I fielded an assortment of some of the most idiotic questions and comments. One man strolled up our front walkway, stopping before a narrow wooden bin filled with the remnants of our once-proud record collection. He withdrew a copy of a 1997 greatest hits release by the British ska band Madness. He held the album up for me to see. "Madness.," he chuckled as he read the printing on the cover, as though I couldn't read it myself. I offered a cockeyed, uncomfortable smile and thought, "I know, idiot, it's my fucking album." The man replaced the album, turned around and walked away.

Another fellow picked up a glossy photo of Dire Straits guitarist Mark Knopfler that my son had decided he could live without. This man, as if mimicking the "Madness" guy, showed the photo to me and pointed to it. "Mark Knopfler.," he said, and then put it back in with our album inventory and strolled away.

Since moving into his own house, my son has slowly (very slowly) begun to dismantle and pare down a twenty-plus year collection of stuff that had accumulated in his former bedroom. He has taken some mementos to his house, while others have been discarded and still others have been offered at one of our previous yard sales. One of those items, an acoustic guitar, was now perched on the cement steps that lead to our front porch. There were several inquiries about the instrument — an introductory model from the good folks at Sam Ash Guitars. One older gentleman in a tie-dyed shirt and a long, gray ponytail fastened with a schmatta to keep it in place, asked the price of the guitar and if he could inspect it. My son grabbed the zipper pull on the case and traced the zipper all the way around the shape of the bag until the guitar was revealed. "I haven't played it in a long time.," my son said as he removed the guitar from the case and handed it to the potential customer. The man peered down his nose at the instrument. "Looks like the bridge is gettin' pulled up by the strings. I can adjust the strings fer ya.," he said, his spindly fingers daintily turning the tuning pegs, his eyes under his furrowed brow focused on the oxidated strings, "I guess it hasn't been played in a while." My son rolled his eyes and whispered to me, "Didn't I just say that?" The man asked, "What're ya askin' fer it?" My son replied, "A hundred including the case. Interested?" "Naw," the guy answered, "I'll adjust the strings for you, though. Got any other guitars?" My son frowned with disgust and whipped the guitar out of the guy's hands and zipped it back up into the case.

In preparation for this sale, I went through my closet and whittled my wardrobe down to just the clothes I regularly wear. I made several large stacks of pants and jeans that I haven't worn in years or no longer fit me or both. The always-enterprising Mrs. P suggested we should put them out at the yard sale rather than just donating them to a local old clothing drop-off box. So, a bunch of my clothes now sat beside a bundle of bent snow shovels and a tall, narrow set of Ikea CD storage shelves that survived our flooded basement. Much to my surprise, a few men furiously unfolded and examined my jeans, each selecting several pairs for purchase at two bucks a pop. While I was happy to sell them, I felt it a bit unnerving that some dudes are now gonna be walking around my neighborhood wearing my pants. Pretty creepy, if you really think about it

Throughout the course of the morning and afternoon, I think more people asked about the beautiful set of connected wooden auditorium seats that we have on our front porch. My wife found them in an antique store. They were rescued from an elementary school in Atlanta, Georgia (...or so we were told. Great antiques must have a great story attached to them) and ended up at our home. We did our best to block the chairs with boxes and empty bins, but still, people craned their necks for a better view and asked, "Oooh! How much are the movie theater seats." I offered the same answer to all, "They are bolted to the porch. If you want 'em, you have to buy the house."

Overall, our sale was a success and we moved a lot of unwanted items out of our house. We held on to some things, storing them on our back porch for one more public offering at a future yard sale. Some items, however, had overstayed their welcome and were amassed in the back of my wife's SUV for donation and eventual tax deduction. But, the real lesson learned here is: "Boy, people are strange."

Posted by josh pincus is crying at 7:57 AM