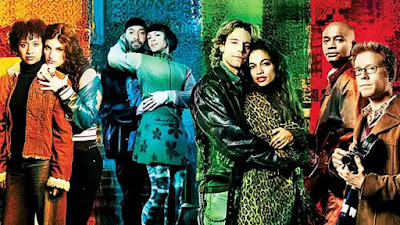 I somehow agreed to go to a friend's house to watch Rent — both the 2005 film version and a recording of the final stage production that, while it opened on Broadway in 1996, was filmed live in 2008 after 5,123 performances. I was not familiar with Rent, aside from knowing it had something to do with AIDS and nearly everyone but me had seen it. I didn't know any songs, or plot lines or even actors. Hell, I'm not even a big fan of musicals to begin with. Oh, there are a few classics that I like — Oklahoma, The Music Man, Singing in the Rain and The Wizard of Oz come to mind — but they are the exceptions, not the rule. And, despite my love of concerts and live music, I get antsy and uncomfortable at live stage productions. I've seen a handful to know that. Like movie musicals, there are a few exceptions. My wife and I saw The Lion King, which was big and overblown, but, as a Disney fan, I was already familiar with the songs. We also saw Jersey Boys. I never was a fan of The Four Seasons, but again, I was familiar with the music and I found it to be enjoyable (plus it was free, so it had that working for it). However, I hated the movie version. It was long and tedious and I caught myself looking at my watch throughout the entire two-plus hour run time.

I'm pretty sure I the only reason I agreed to this event was because it was touted as an "80s" themed gathering (since the show takes place in the late 1980s). Invited guests were asked to bring "80s" themed food — whatever that means. A Google search of "80s food" yielded such memorable decades-past treats as "fruit snacks" and "Capri Sun," but our host was looking for more substantial fare. Mrs. P decided to take a shot at making spinach-artichoke dip and potato skins (in addition to a couple of batches of brownies, 'cause brownies were invented in the 80s, right?). Bottom line, if there's food, I'll sit through pretty much anything.

While Mrs. P and our host set things out on the dining room table buffet style, I lazily plopped myself down on the sofa. I noticed the DVD cases for both films lying on the coffee table. I picked them up, immediately searching for the length of each. The film, according to the little specifications legend buried in the corner under a collage of splashy pictures of the cast, runs 135 minutes. The filmed stage show clocked in at almost three hours. I looked up from the boxes and tried to get our host's attention.

"We're watching almost six hours of this?" I asked gesturing to the plastic-clad packaging.

"And a 'making of' documentary! Don't forget that!" she explained.

With the table set and guests fed, our host popped the first disk into the player. By popular demand, we would be starting with the movie. It was shorter. The credits began and eight silhouetted figures wailed the song "Seasons of Love." I was surprised by the fact that I had actually heard the song before, though I didn't know its title and I didn't know it was from Rent. As the list of actors faded in and out of prominence on the screen, I was again surprised by how many I knew. There was sultry Rosario Dawson, finally able to shake the ghosts of Josie and the Pussycats and properly show off her musical prowess. There was that guy from Law & Order who now costars on The Flash. I recognized Tracie Thoms from Quentin Tarantino's Death Proof and from the captivating and unfairly short-lived series Wonderfalls. And I spotted Sarah Silverman's name and thought, "Well, okay. I'll give it a chance."

I watched, taking it in, judging. The songs were — well, they were everything I dislike about the current trends in Broadway musicals. They were big, loud, overly-dramatic show-stopping numbers that, while carried off by the talented cast, were (in my admittedly untrained opinion) totally forgettable. One song, "Tango: Maureen," I thought was clever in its execution, subject matter and staging. The rest, I couldn't remember even under bright lights with a gun to my head.

The more I watched, the more I was reminded of a show I saw when I was in sixth grade. My mom (one of the coolest people that ever lived, no bias there.) took me out of school to treat me to a matinee performance of the rock-opera Hair when its touring company made a stop at Philadelphia's Shubert Theater (now The Merriam Theater). We hurried up Broad Street to the venue, only to be greeted by a rowdy group of protesters, beating a circular path on the public sidewalk, just feet from the theater's entrance. One woman in a sensible wool coat, conservative hat and white-gloved hands wrapped around the support post of a sign reading "PORNOGRAPHY!!" (with two exclamation points for extra emphasis!!) screamed at my mother, "Are you taking this child into see this smut?!" Little did this woman know, I had been listening to the soundtrack album daily for the past few years. I memorized every song, every lyric, every note. I sang along, sometimes duetting with my mom. (Told ya she was cool!) My mother turned to the woman and plainly asked, "Have you seen it?" The woman was horrified by the question. "No!," she huffed, "I wouldn't dare!" "Well, I'll let you know how it is when we come out.," my mom replied as we pushed our way past the human blockade. I turned and stuck my little tongue out at the lady as we passed through the doors.

Rent reminded me of Hair in its passion for the seriousness of its subject matter (Rent: AIDS; Hair: The Vietnam War). The rag-tag group of youthful performers in Rent were also reminiscent of the company of hippies that comprised the cast of Hair. Since I made that mental comparison, I couldn't get it out of my head. It stuck with me for the rest of the film's run. It wasn't a bad thing, I wasn't bored by the film. I just wasn't grabbed by it. I felt as though I was watching an updating of Hair and I found that distracting.

Oddly, at Rent's conclusion, I was reminded of another movie-related scenario. I saw Pirates of the Caribbean: Dead Man's Chest, the second installment in the Disney POTC franchise of films, on its opening night. At the grandiose epic's finale, my son turned to me and reported, "That was Back to the Future II." I laughed, immediately getting the reference. Both films were purely set-ups for a third part to wrap up all loose ends and send fans off with closure tied up with a big red bow. Although Rent was not part of a trilogy (at least I don't think it is), it's similarity to another film (in this case Hair) struck me as  — oh, I don't know  —  similar.

I expressed my opinions to our host. A fellow movie fan, she accepted my assessment. We have agreed and disagreed on many movies, but that's a good quality in any friendship. She smiled and reached for the second DVD, however, the general consensus among the guests was "Let's save this for another time." Instead, more brownies were eaten.

The next showing of Rent in currently under consideration.

www.joshpincusiscrying.com
Posted by josh pincus is crying at 8:08 AM