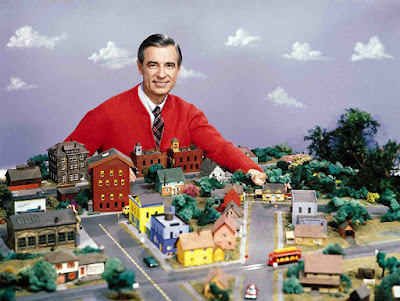 Mister Rogers would have sung a different tune about how beautiful the days are in his neighborhood had he lived next to the lunatics that occupy the house next to mine. We live in, what is known in our area, as a "twin home." In some other parts of the country, this sort of structure is called a "duplex" or "semi-detached." It's basically a single building comprised of two single-family dwellings sharing a common wall at the center. The individual floor plans of each home are usually mirror images of each other. (A "duplex," in the Philadelphia area, is the same idea, but the individual homes are stacked on top of each other instead of side-by-side. That concludes the architecture lesson of this blog.)

There always seemed to be something weird going on in the house next door since the day we moved in to our house in 1986. Not necessarily "Amityville Horror weird", but weird nevertheless. Our neighbors were a female couple who mostly kept to themselves. I was fine with that. I know I am not the most warm and friendly guy that ever lived. A cordial nod or wave (or maybe even an infrequent "good morning") is just about the extent of any neighborly relationship I've ever had. Sometimes, I didn't even get that from those two women next door. One day, just after our son was born, I was in his room checking on some sounds I heard from the electronic baby monitor. He was enjoying a sound afternoon nap in his darkened room. I heard something outside, so I parted a couple of the Venetian blind slats that covered the window overlooking our, and subsequently our neighbor's, backyard. Through that tiny horizontal opening, I spied my neighbors relaxing in their newly-installed hot tub on their newly-installed wooden deck and they were sans clothing of any kind. I quickly snapped the blinds to their original position and thought about what sort of environment my son would be exposed to.... no pun intended. But, luckily, those ladies moved away long before my boy's curiosity expanded beyond the likes of The Mighty Morphin Power Rangers.


The house was soon purchased by a young man in his 20s with a great job, a lot of money and very little life experience. Within his first week as our new neighbor, he approached my wife and me with a proposal for new rain gutters for our houses. He went on to suggest copper gutters, elaborating on their classic elegance and aesthetically-pleasing appearance or some such flowery bullshit. We didn't need new gutters. I didn't want new gutters, but, somehow, I was talked into getting new gutters and expensive copper ones to boot. Our new neighbor had already received a price from a contractor, which he shared with us. I questioned the unusually low price, as covering the entire building or was that the price for each of our homes. He assured me it was one price that we would split down the middle. "Okay." I figured, "This kid works as an accountant for KMPG, an international financial audit and consulting firm. I guess he understands how to read a work estimate." We agreed to have new copper gutters installed.

Turns out, this guy didn't have the vaguest understanding of how to read an invoice. As I had originally suspected, the price was for each of our homes and the total would be doubled, not split. I was furious and I let him know it. I paid our share and never spoke a word to that guy for the remaining two years he was our neighbor.

Two years after the rain gutter incident, he was transferred to Southern California. Unable to sell his house (for which he grossly overpaid), he offered it for lease and became a bi-coastal landlord. (As a footnote to his move, he took his girlfriend with him to the Golden State, where she promptly left him after he was fired from the job that transferred him. Five jobs later, he still remains in California and is still unable to sell the house connected to ours.)

Our new neighbors, now lessees, were six college students who turned the left half of our twin into National Lampoon's Animal House. For eighteen months, we were subjected to keggers on the deck, loads of trash and boisterous and unruly crowds of "college dudes" all accompanied by the strains of bad rap music. After they finally vacated, the current residents — also renters — moved in.

Once again, our relationship started out cordial. My wife, always friendly, welcomed our new neighbors. At first they, too, were friendly. But soon, they retreated into isolation. They were rarely visible. They pulled their young son from school. We began to hear loud noises through our common wall — banging, screaming, crying — at all hours of the day and night. One day, I saw our neighbors dumping something over their backyard fence. Then I saw them do it again. Soon, we began to smell skunks regularly and a groundhog took up residence in our backyard. There was something eerie and dangerous about their behavior, like the kind of people you see on the receiving end of a government siege on a separatist compound. An event that usual ends with the power being shut off and the launching of some sort of incendiary device. We did our best to steer clear of them.

A month or so ago, during a particularly heavy rain storm, the ceiling of a room on our second floor took on the characteristics of Niagara Falls, Rain water had broken through several ignored cracks and was now soaking the floor and furniture. We threw down some tarps and an inspection, when the weather cleared up, told us we needed a new roof. Mrs. P contacted our West Coast neighbor and he agreed to have his roof replaced as well, hoping for a better price to do the whole building. (Lucky for him, we know how to read an estimate.) We assumed that he, as landlord, would inform his tenants about the upcoming work. It certainly wasn't our responsibility.  Again, his informing skills, like his invoice-reading skills, leave a lot to be desired.

Just before 9 AM on the day the roofing work was to begin, Mrs. Pincus received this text from our renting neighbor. (Note - Mrs. Pincus is, of course, designated by the little Grateful Dead icon.):
The roofers were waiting for delivery of a Dumpster that would be left of the street for the duration of the repair project, approximately two days. While they waited, the unloaded building materials and parked their truck in my neighbor's driveway. She was not happy and acted as though it was a complete surprise. She was rude and angry and took her anger out on my wife.

The next day, after she had sufficient time to calm down. Mrs. P received this text: 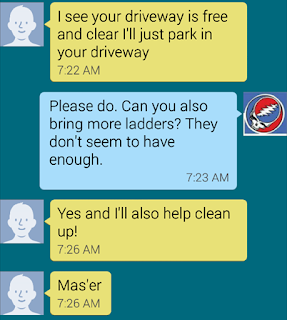 Ah, what could possibly top a rude comment? Why, a little racism, of course! Nothing like a derogatory reference about cleaning at 7:30 in the morning.

The work was completed late on the second day. The roofers planned to return the next morning to pick up any unused material and leave our property looking as it did when they found it. They also needed to arrange for removal of the full Dumpster. Before I left for work, I secured the parking spaces in front of my house with a couple of trash cans strategically-placed behind the Dumpster. I was satisfied with my positioning of the cans and began to make my way back to my house, my neighbor barged out of her house screaming and pointing.

"When is this thing moving?," she screeched, gesturing towards the Dumpster.

I calmly answered, "I don't know." I honestly didn't, but I assumed it would be gone in an hour or two.

"Well, it's been blocking my driveway all week!," she shrieked, teeth bared, arms waving wildly.

First of all, it was two days, not all week. Second of all, it would most likely be moved before noon. Third of all, I didn't give a shit. Actually, make that first.

"I didn't put it there.," I replied, this time with a little bit of edge in my voice.

She responded with an incoherent stream of shrill squeals, too high pitched for me to recognize any actual words. I silently answered by going into my house and shutting the door — mid-squawk.

A later conversation my wife had with the house's owner revealed that he would be putting the house up for outright sale in the spring and that the current tenant would be moving in May... or sooner if a sale agreement comes first.

I anticipate the Munsters moving in sometime this summer. In comparison, that wouldn't be such a bad thing.

www.joshpincusiscrying.com
Posted by josh pincus is crying at 8:05 AM