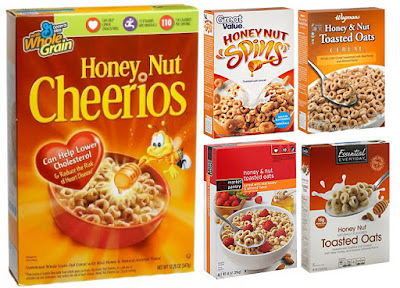 When I was a kid, we only bought nationally-advertised, brand name groceries. Although it was never openly discussed or mandated, store-brand products were for poor people or worse — old people. At least that was what I gathered from my mother's supermarket purchases. Heinz ketchup, Hellman's mayonnaise, Campbell's soup — those were the names that received unwavering loyalty in the Pincus household.

Recently, I radically changed my eating habits. For years, like 31 million other Americans, I skipped breakfast, opting instead for a cup of coffee to carry me through the day. Last year, I began eating a bowl of cereal every morning. As much as I wanted, I forced myself to avoid childhood favorites like Cap'n Crunch and Froot Loops*. Instead, I chose the more sensible Cheerios family of cereals, specifically Honey Nut Cheerios, the most popular of the many Cheerios varieties and the most popular cereal in America for several years running. Despite not having a cool prize tucked within the inner product bag, the cereal itself is pretty good. Not too sweet and not nearly as bland as the plain Cheerios that my son teethed upon as a baby.

Under my newly-adopted eating regimen, I noticed that I was going through a big box of Honey Nut Cheerios approximately every ten days. At nearly five bucks a pop, this was getting pretty costly. So, the next time my morning meal supply was running low, I decided to try to be a little more frugal with my choices.

At Acme Market (known as Albertson's in some parts of the country), I compared the price of the national Honey Nut Cheerios to that of the store-branded "Essential Everyday" lengthy but closely-named "Honey Nut Toasted Oats." It was considerably cheaper. I know that "cheaper" usually translates to "inferior quality," but I was willing to risk it for a nearly two-and-a-half dollar savings. The next morning, I poured myself a bowl of generically-named, yet similar-looking Honey Nut Toasted Oats and doused it with milk. It was not bad. It was not Cheerios, but it was not bad. I didn't gag. I didn't toss the bowl's contents down the garbage disposal in disgust.** As a matter of fact, it tasted pretty good. Satisfied, I ate a bowl every morning until the box was empty. I could definitely taste the difference, but it wasn't so different that I wasn't able to eat and enjoy it.

I decided to try the offerings from other stores and other store brands. Guess what? Every store has their own brand of cereal that is comparable to the mighty Cheerios... and they all carry a considerably smaller price tag. As far as their taste, they are all pretty good. Hell, at 6:30 in the morning, my taste buds aren't fully awake anyway. As a humorous bonus, they all boast unimaginative and innocuous names, so as not to prompt a lawsuit from the good folks at General Mills. My personal favorite is Walmart's Honey Nut Spins. (They could have gone with "Loops" or "Hoops" or "Wheels" or even "Circles," but they chose "Spins" even though the little oat morsels remain perfectly still from the box to bowl and all through the breakfast duration. I watched. Not a single spin was detected.) Walmart, it should be noted, is the undisputed king of nearly-homophonic store-brand names, with their upstart line of sodas like "Dr. Thunder" and "Mountain Lightning" taking on national competitors. I think you know which ones I mean.

So, against everything my mother taught me about grocery shopping, I have stopped purchasing name-brand cereal in favor of the store-brand counterparts. I have even expanded beyond breakfast, choosing store-brand bagged salad over Dole or Fresh Express and store-brand pickles over brands like Vlasic. There's one place I draw the line, though, when it comes to food. I don't care if it has an affiliation with a national trusted brand or not, I refuse to purchase and consume any sort of food that proclaims its contents are "ancient." I mean aren't these things supposed to have an expiration date?

*Studies have shown that Froot Loops are not now, nor have they ever been, made with real froot.
** Don't throw cereal down the garbage disposal anyway. Trust me on this. Your plumber will thank you.
Posted by josh pincus is crying at 6:26 AM