come on over to my yard 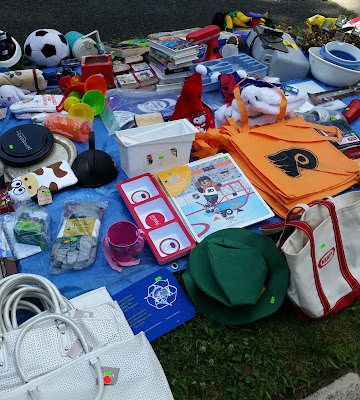 My wife is driven and determined. When she sets her mind to something ― goddammit! ― it gets done and it gets done right! So, last summer, when a neighbor invited us to bring a few items over for a yard sale, Mrs. P was bitten by the "Yard Sale Bug" just after our modest contribution (our rarely-used, wrought iron patio furniture) was snapped up quickly ― and for a pretty good price. Mrs. P already envisioned the spectacle that would be our next yard sale.

Almost immediately after our neighbor began packing up their unsold offerings. my spouse began a mental inventory of additional items from our home that could she could easily part with. When items were weighed between "do we really need this?" and the possibility of extra cash, the cash always won. So for the next several weeks, our back porch  ― and soon, dining room and living room ― slowly accumulated an inventory of housewares, clothing, jewelry, books and knick-knacks that could put a Woolworth's* to shame. She also saw a yard sale as the perfect opportunity to thin out some "slow movers" from her eBay store**. So, more gathering and storing took place until the first floor of our house resembled a compact flea market. This was going to be the mother of all yard sales. Mrs. P would personally see to that.

We plastered our neighborhood with hundreds of signs tacked up on every available utility pole. Mrs. P posted notices on various social media sites, including electronic community bulletin boards and township Facebook pages. She placed and regularly updated announcements on Craig's List. And she told everybody who glanced in her direction. On the designated morning, we carted load after load of merchandise out to our small front lawn, thoughtfully arranging everything for maximum visibility and, more importantly, sale-ability. (Mrs. P's many years of experience running her parents' retail store came into play.) The potential customers milled about as we were still covering our grass with a mish-mash of appliances, toys, decorations and who-knows-what!. Mrs. P tied on an apron, dumped change into the big front pockets and proclaimed us "Open for Business." To quote Brad Pitt from Inglorious Basterds, "And cousin, business is a-boomin'." At the end of a long, grueling, yet satisfying day, we took in a very nice sum of money ― plus we got rid of a ton of shit that our son won't have to weed though after we die. Very nice indeed.

Around mid-afternoon, a man strolled up to our yard. He was wearing a pristine pink polo shirt (actual Polo brand; little horse logo and all) with the collar popped up and a pair of sharply pressed khakis. A pair of actual RayBans were perched on top of his head and a shiny iPhone 6 was clipped to his braided belt. He smiled and offered a "Good afternoon," as he looked over our wares. He knelt down and picked up a small trowel that I used once to apply a small amount of Spackle to a nail hole in a wall about twenty years earlier. My wife had marked it $1.00.

"I'll give you fifty cents for this." he said, waving the trowel in our direction, a cocked smile across his face.

My wife considered the offer and, ever the seasoned businesswoman, countered with, "Will you be getting something else? I can give you a deal on a lot."

He picked up a few more items, proposing a "fifty cent" price for each one, regardless of what it was marked. I began to fume, but the ever-patient Mrs. P negotiated and finally they agreed on a price for all of his selections. Mrs. P thanked him. I muttered a few unsavory phrases under my breath.

A week ago, we had our first of several planned yard sales of this year. We followed the same ritual and set-up and, once again, with our small front lawn laden with a cornucopia of treasures, we did a pretty good business.

And guess who made an appearance ― The "fifty cent" guy.

This year, he chose a never-used box of Crayola colored pencils (these, as a matter of fact), each with the factory-sharpened point still intact. My wife had marked the box one dollar.

"I'll give you fifty cents for this." he said, waving the box of pencils in our direction, a cocked smile across his face.

My wife considered the offer and, ever the seasoned businesswoman, countered with, "Will you be getting something else? I can give you a deal on a lot."

He pointed to a stack of five terracotta flower pots at the foot of our driveway. There were several different sizes and each one had a matching tray. "I'll give you fifty cents for them," he said, "I don't see a price on them."

My wife, smiling, walked toward the flower pots. She discovered a large cardboard sign stuck in the top pot of the stack. Bright red letters on the sign proclaimed the stack to be two dollars. One could easily read the sign from several feet away.

"No," Mrs. P began, "I think two dollars is a fair price for those. And a dollar for the pencils is fair, too. Name brand. Never used. Yeah, a dollar will be fine." The smile never left her lips.

The man removed a thick leather wallet from his immaculate, designer trousers and extracted three crisp singles. My wife thanked him graciously and sincerely. I would have told him that those items were not for sale.

Obviously, our yard sale was successful because I was not in charge.