wake up the members of my nation 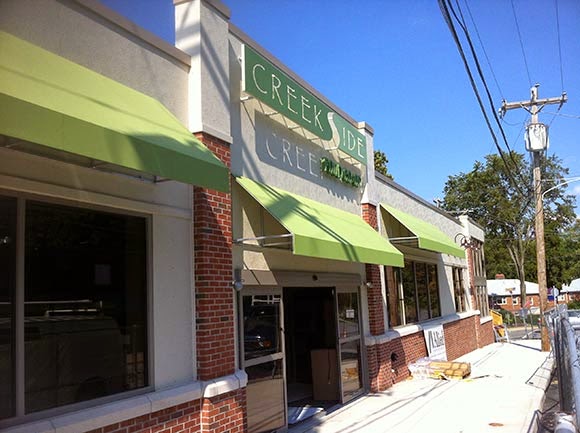 When I moved to Elkins Park, there was a little grocery around the corner from my house called Ashbourne Market. Despite its small footprint, the store offered a variety of specialty items, gourmet versions of many dietary staples and a smattering of unusual and exotic fare. At the time, it managed to hold its own against the big chain supermarkets. As a matter of fact, it thrived. The neighborhood loved the little market and it was often very busy.

And then it closed. The neighborhood yentas spread rumors, speculating on any number of reasons for their favorite store's collapse, but no one was able to nail down the actual cause. The building sat empty for a long time. A big, hulking shell smack on a main thoroughfare opposite the Elkins Park train station, its presence a sad reminder of a once-bustling retail establishment.

Meanwhile, a burgeoning co-op opened a mere six miles away, supplying the revitalized neighborhood of Mount Airy with a real sense of community and camaraderie. It was the true embodiment of how a co-op functions.

Someone in Elkins Park, with their heart in the right place, suggested that the former Ashbourne market site would be the ideal location for a co-op of our very own. A committee was formed. Meetings were held and a membership drive began in 2009. And the building remained empty. For a long time. A... very... long... time. The meetings still continued and more members were recruited but without a lick of progress on the building.


Suddenly, at the beginning of 2012 (that's right, three years later), demolition crews descended on the building and — at a snail's pace — gutted the place. The construction was done sporadically, taking place a day here and a day there — rarely consecutive —  with any noticeable progress appearing over a period of many months. Then, behind the makeshift construction fence, something resembling a store emerged. But, that sat empty for more months. Finally, at the very end of November 2012 (post-Thanksgiving), the newly named Creekside Co-op opened for business. Opening for business was its first mistake.

I love this neighborhood. It's a quiet suburb just outside of Philadelphia. My wife grew up here. We raised our son here. But, the neighborhood has this uncanny knack for not supporting local businesses. As much as they may think they do, they don't. I've seen many new businesses (restaurants, clothing stores, pizza shops) open and close like a door with a faulty hinge. Granted, most of them were started by people with big ideas and no business sense, but the neighborhood was less than supportive. Creekside Co-op was headed down the same, dark, bankrupt path.

Though not a member, I've been to Creekside a couple of times. On my first visit, I bought a loaf of bread, the same national brand I could have bought at a supermarket. I was just too lazy to get in my car and drive to the supermarket. As I made my way to the checkout, I spotted Campbell's soup, Heinz ketchup, Kraft cheese, Coca-Cola and several other "exotic and unusual" brands on the shelves.  At the checkout, the cashier asked me if I was a member. When I replied "No," he just rang up my bread and told me the total. No friendly spiel about the benefits of membership. No pitch about "community pride" or whatever. No nothing. Just an unemotional "Two twenty-nine." Not even a "please."

My next visit was to fulfill a spur-of-the-moment craving for guacamole. I walked over to Creekside and headed straight to the refrigerated prepared food display, where I found a small, overpriced container of mashed-in-store avocado, cilantro and spices. On this and every subsequent visit, I  observed that I was only one of maybe two or three customers milling around the place. I also noted that, from the time that Creekside opened until right this very second, I have never received a single advertisement/flier/solicitation of any kind enticing me to join or explaining how my quality of life would be richly enhanced if I signed my family up for a membership. Not a single advertisement making me aware that Creekside even exists. The building conveys no air of "welcome" from the outside, an attitude that carries on right to the employees.

Last month, just after its surprising two-year anniversary, the Creekside president posted this rant on the Creekside's Facebook page:

From our CreekSide co-op president: I know most of you think I am crazy. I am not. I hate starting something that I cant finish well yet I don't want to chase pipe dreams -life is too short for that and as we know - shit happens so we better do stuff with our time that we really value. I value this. I don't want thank yous, I don't want arguments - I just want you to think about what this community will be if we close the doors.

Amidst the gloom and doom, here is where I find hope. Its always in the numbers -- in September and October - we had 1800 member households shop at least once in the coop. given we only have 2250 total member households, our HIT ratio it off the charts. Some of them only came once, some twice, but they came and they shopped .. we need to make their shopping experience better - whatever that means as it means something different to every single person who walks through the door - but the good news is they walked through the door. if we can get half of those people 900 of them to buy $15 more each week, our sales increase $13,500 each and every week -- if 1000 spend the same extra $15 a week - its $15000. It's in our control -- we are not asking or expecting any one family or 100 families to carry the day - we are asking half of our membership to spend an incremental $15/week -- its nothing.

Please think about where you shop and what you buy there. wherever it is - its not your store and that money doesn't stay in our township. Look at your receipt from whole foods, trader joes, and ask yourself if you can shift $15/week to the coop. If I thought this was a lost cause or a pipe dream, I wouldn't put so much energy into this = believe it or not, I could do other things but nothing that helps our little community as much.

So here is my ask -- think about where you shop other than the coop and what you buy there - can you shift $15 to the coop per week? If so, please do so. Second ask -- Please share this email with others in our community- your friends, and family - they don't have to be members - the corner is right there for us to turn. its always nicer to do it together.

Thanks for listening -- and helping and sharing. It's worth it .. the alternative stinks!!

See what I mean about "no business sense?" Here is the president of a community effort alternately begging and berating customers in a public forum — and interjecting a little foul language to boot. Does a business person speak to customers this way and expect them to still patronize the store and continue to offer support? Is it really endearing to scold your members, supporters and potential customers? Besides, it's unprofessional and poorly written. I do know that the job of Creekside Co-op General Manager pays very well — more than I make, as a matter of fact. Not a problem, except that this place is pleading for additional support from current supporters. They don't seem to be reaching outside of their member base. They are, as they say, "preaching to the choir," and condemning them at the same time.

I was so offended by this angry diatribe that I promised myself to never set foot in Creekside again. Actually, I wasn't planning on setting foot in Creekside again anyway, so it'll be pretty easy to keep that vow. At this point, I hope this place closes and a real co-op opens in its place. One run by grateful, friendly people who really care about their investment, their community and their local residents and suppliers, not just a bunch of clueless loudmouths who like to be on committees.

Either that or a Wawa.


* * * * UPDATE * * * *
As of today, this post has been viewed by 869 people. Now, I don't know if that means they all read it, but they at least browsed their way to this page. Based on a lively discussion on the Elkins Park Happenings Facebook page, I seemed to have given the members of Creekside Co-op the kick in the ass that they needed. Instead of the big, happy, campfire "Kumbaya" mentality of patting each other on the back and congratulating each other on what a great job they are doing, they sat up and took a hard and realistic look at their shortcomings. Hopefully, they will figure it all out and prove me wrong.

www.joshpincusiscrying.com
Posted by josh pincus is crying at 6:37 AM