cry if you want to 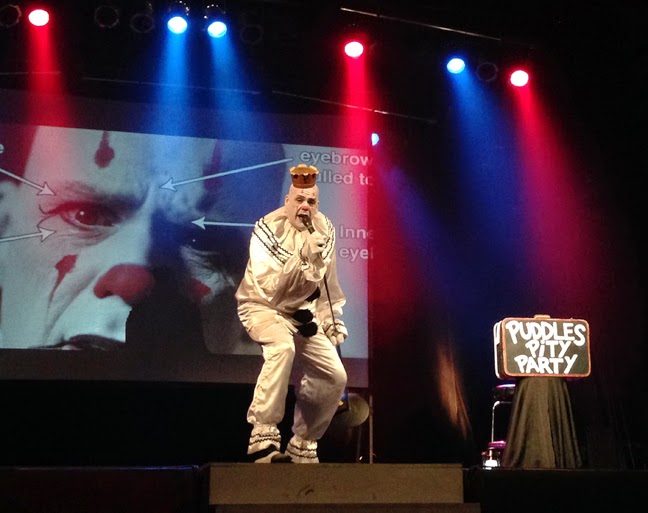 In March 2013, when my son E. and I went to see our third concert by the indie cult band eels, we didn't know what to expect from the opening act that was mysteriously billed as "Puddles Pity Party." Last night, we were a bit more prepared... or so we thought.

Puddles Pity Party is a... well, I'm not sure what it is. It's sort of a multimedia "event" featuring Puddles, a six-foot-eight pancaked "sad clown with a golden voice." And what a voice he has! Powerful, commanding, gut-wrenching. But he only uses it for singing. Otherwise, he remains silent, expressing himself only with pantomime and sparse stage props.

The floor of the venerable Trocadero (or "The Troc," as it has been nicknamed by Philadelphia locals), an ornate one-time vaudeville theater, was arranged with tables and chairs as though the place had been booked for a wedding reception. E. and I grabbed seats at table up front and we chatted until showtime. When we saw Puddles Pity Party last time, he was an opening act and his short set could only accommodate five or so songs. We wondered what he would do, besides sing of course, to fill an hour. The house lights dimmed and our questions were about to be answered.

For the next 75 minutes, we witnessed a full spectrum of entertainment. The performance, dare I say spectacle, showcased shtick, karaoke, audience participation, slapstick comedy and singing. Singing the likes of which you have never heard. What a set of pipes on this guy! Between short, comical interactions with the audience, including serenades to a few with a personal message of "Happy Birthday," Puddles reclined across a makeshift set of stairs and prowled the massive stage, all while unleashing his rich multi-octave vocals to the joy and bewilderment of the crowd. Sure, the act is gimmicky and the entire concept is unusual, but there is no disputing the sheer beauty of Puddles' voice. He treated the audience to renditions of The Bee Gee's "I Started a Joke," Leonard Cohen's reverent "Hallelujah," and his interpretation of Lorde's "Royals," which has become an internet sensation. His heartfelt delivery of "My Heart Will Go On (The Love Theme from Titanic)" was inexplicably enhanced by a slideshow montage of scenes from Kevin Costner films. He even transitioned the song into a take on Metallica's "One." During his tearjerking cover of The Flat Duo Jets' "Lonely Guy," Puddles showered the front row with dozens of spent tissues, dampened with his own tears.

At the show's conclusion, the clown graciously posed for photos with each member of the audience.

Those prone to bouts of coulrophobia, proceed at your own risk.

Here's little taste of Puddles... and that voice.

www.joshpincusiscrying.com
Posted by josh pincus is crying at 11:00 PM