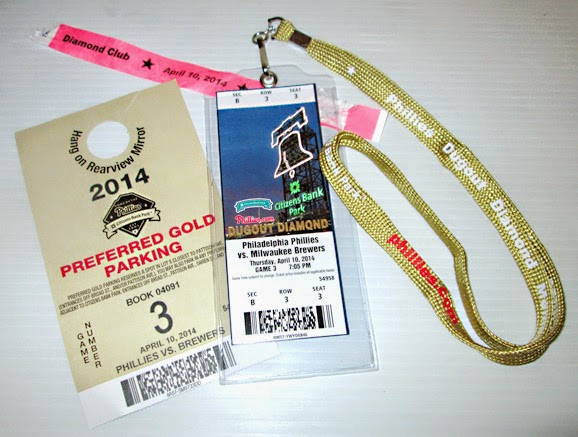 After eighteen seasons, Mrs. P and I chose not to renew our Philadelphia Phillies season tickets. It was a roller coaster experience from the lows of last-place finishes to the highs of a World Series win. We witnessed a no-hitter, a playoff clincher on the last day of the season, the implosion of the old toilet-bowl that was Veterans Stadium (the Fightin' Phils' home for 33 seasons) and the christening of the beautiful new, state-of-the-art Citizens Bank Park (now, celebrating its tenth anniversary). The Phillies themselves have come full circle in that time, going from a pathetic conglomerate of uncoordinated losers to scrappy hustlers, hungry for the win and now returning to an aging group of "memories of one-time greatness." A lot of factors played into our ultimate decision. So as the 2014 baseball season approached, we resigned ourselves to the reality of watching the Phillies on television.

But, as the Phillies were opening their season on the road in Arlington, Texas, Mrs. P and I received word that the law firm that employs me had offered the Marketing Department (of which I am a member) tickets for the first Sunday home game. The firm has access to a so-called "luxury suite," one of many corporate-owned private boxes that accommodate sixteen people, lavishing guests with food and drink and a personal hostess. It's a pretty sweet deal, especially if you are used to sitting out in the "regular" seats with the commoners. While the suite is very nice and affords a great way to see a ball game, it does not offer the best seats in the house.

Early this week, while the Phils were losing their home opener at the hands of the (currently) red-hot Milwaukee Brewers, Mrs. P called me at work to see if we had plans for Thursday evening. I told her that we did not and she cheerfully informed me that Rae and O., our neighbors from across the street, invited (actually insisted) us to join them at the final Phillies-Brewers match-up. Rae works for a multi-billion dollar international pharmaceutical company*. The company owns four seats in the prestigious Diamond Club section of Citizens Bank Park. That's the cordoned-off section that you can see from your shitty, third-deck seats and wonder "How do you get to sit in those seats?" Well, the answer is: You gotta know someone.

On Thursday, we arrived at the ballpark and followed the flow of the crowd around the concourse until we found ourselves at a set of imposing glass doors that screamed "for privileged people only!" We flashed our gold-stamped tickets and were happily welcomed into the fray. Smiling staff members ushered us towards a flight of stairs where we were wrist-banded and admitted into a secret world of gourmet buffets, a fully-stocked, top-shelf bar and impeccably-themed baseball everything — tables, chairs, light fixtures, floor tiles — everything! It was awesome. Our special gold tickets entitled us to unlimited food and beverages. That's right, unlimited! Of course, we partook of the typical baseball game fare — goat cheese and wild mushroom ravioli with pesto and focaccia, freshly prepared before our eyes. Also, forgotten in the lyrics of  "Take Me Out to The Ball Game," there was grilled steak and chicken paninis (for you carnivores) and a full salad bar, plus a huge selection of alcoholic and soft drinks — all included in the price of admission. For us, that was "free."

After dinner, we found our way down to our actual seats. According to our tickets, we were in Row 3. Aramark, the multifaceted food service entity, occupies seats in Row 2. There is no Row 1. Row 1 is the field. We were so close to home plate, I thought I was going to be tagged to catch that evening's game. We were mere feet from the Brewer's on-deck circle. During the game, I marveled at how young all the players are. They look like children, even Aramis Ramírez, a seventeen-year veteran who played for two other teams. I was so close, I could tell which players need a shave. When admitted steroid user Ryan Braun came up to take some practice swings, the taunts and insults from behind me were so loud and so clear, he had to have heard them. Perhaps he was removing his batting helmet to wipe away a tear. Or perhaps he was just blotting up some sweat and didn't really care what the Philadelphia fans are hollering at him.

A nice young lady introduced herself as our server for the evening. She displayed a list of the complementary offerings and, once again, we over indulged, requesting sodas and candy and peanuts and Cracker Jack (just like the song says.) She also told us that the buffet would be open until the sixth inning. I made a mental note to run up at the bottom of the fifth for ice cream in a souvenir mini Phillies helmet Maybe two! I'm sure they had my favorite flavor — "free."

The overall experience was surreal. I have been watching baseball since I was a kid, but I never saw a game from this vantage point. The balls come rocketing from the pitcher's hand (especially from a master like Phillies starter Cliff Lee). The foul balls drop from the sky like atomic bombs. And of course there are things you never get to see, unless you are this close. Like this guy, for instance. Between innings, he stood at the edge of the field next to a guy seated behind a giant-lensed camera. With an enormous headset straddling his skull, he raised a series of colored, Plexiglas squares high above his head. He meticulously timed the duration of each hoist, substituting a different hue as he ticked off the seconds on his wristwatch. I was fascinated by this guy! I had never noticed him before, but now, being just a few feet from me and I couldn't stop looking at him! What was his purpose? Who was on the other end of his sophisticated communication device? And, most importantly, what did he write for "occupation" on his 1040 form?

The Phillies, who took an early lead on a home run by off-season acquisition Marlon Byrd, were now in a catch-up situation. The stalwart Brewers widened the gap in the score. The Phillies, who couldn't hit a ball out of the infield, were obviously not up to the task of winning. The game plodded along. O., admittedly not familiar with baseball, was losing interest. He asked me the location of seats that my "firm law" provides. (O.'s native tongue is Hebrew, where, like most languages, the adjective follows the noun it is modifying.) He fiddled with his phone, posing for "selfies" of Rae and himself. He was bored. Judging by the vast amount of empty seats, the remainder of the 25,000 announced attendees had had enough of this drubbing as well. In the ninth, third baseman Cody Asche swung at an outside fastball for out number three and the weary Phils recorded their fourth consecutive loss.

But, man, were those seats great!


* I originally thought that she was cooking up meth in her basement when she told us she worked in the pharmaceutical industry.
Posted by josh pincus is crying at 3:44 PM