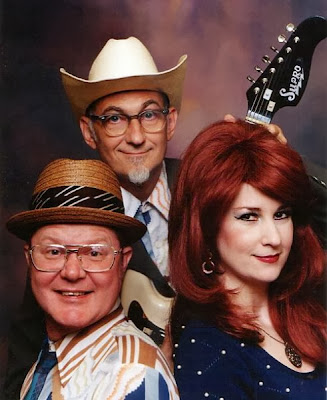 Boasting one of the coolest band names in music, Southern Culture on the Skids formed in 1983 as the self-proclaimed purveyors of "toe sucking geek rock." While the radio waves were jammed with the likes of synthesizer-heavy New Wave, SCOTS were pumping out their inimitable brand of Southern-fried surf or countrified R & B ... or a reasonable combination of the two. The band is comprised of guitarist-songwriter Rick Miller, (who looks more at home holding a can of PBR than his beat-up vintage Danelectro), along with bee-hived bassist Mary Huff and stand-up drummer Dave Hartman. I stumbled across the down-home trio with their 1995 release Dirt Track Date, not knowing that I had missed four albums and some EPs over the previous few years. My then 8-year-old son, always on the outskirts of mainstream music, was even digging their guitar-driven twang. By the time their follow-up CD, Plastic Seat Sweat, came out in 1997, my boy was adding their songs to a playlist that he was compiling for his Bar Mitzvah. Bubbie and Zayde would never be the same.

I've seen Southern Culture on the Skids many times over the years and , while their live show is an upbeat raucous celebration, it very rarely strays from its formulaic basics. Certain songs have become live show staples, as well as the order in which they are performed. I'm not knocking this agenda, I'm merely saying that one knows what to expect from a SCOTS concert. Mary will check her makeup, pluck her bass and deflect catcalls from the male members of the crowd. Audience members will be invited to the stage to join the band in a little "Camel Walk"-ing. Rick will relate a road-weary tale of the tour in his folksy drawl.

And chicken will be thrown.

Track 7 from the aforementioned Dirt Track Date is the notorious "Eight Piece Box," and it has become a fan favorite. Southern Culture's concert rider, I can only assume based on the regular appearance of the tune in the set list, must include a standing supplication for the venue to provide a bucket's worth (if that's a standard unit of measure?) of fresh fried chicken - Southern or otherwise. So, as the band is tearing through such crowd-pleasers as "Voodoo Cadillac" and "Soul City, " the unmistakeable smell of batter-dredged and deep-fried poultry fills the air, alerting the faithful as to the identity of the next number and giving fair warning to veterans of past shows. To the uninitiated, now's the time to take cover, because as Rick is picking out the opening riff, he's also flinging those breaded chicken carcasses in a high arc, above the spotlights, where they will rain down upon the crowd in a heavy, greasy fowl barrage. What is a pleasant four minutes and two second song duration can be quite unpleasant for some. I have been attending concerts for nearly forty years and I have dodged a lot of foreign objects that have been hurled either from the stage or from the audience. Fried chicken, I can say with some amount of confidence, is unique to Southern Culture on the Skids shows.

My son was DJing on stage before the show and between each of the three bands' sets. As each act readied themselves to play, my son ducked into a backstage area and soon joined me and Mrs. Pincus in the standing audience. As each set drew to completion, he'd stealthily appear in the stage wings prepared to continue spinning tunes until the next band was up. Towards the end of Southern Culture's performance, my son sent a photo to me via text message. When my cellphone vibrated, I clicked to view to picture he had snapped from his backstage vantage point. From what I could tell, it was a stainless-steel, commercial restaurant container filled with fried chicken. I knew what was coming. Sure enough, within seconds, Rick Miller was asking dancers to come on up to the stage. The sound of an electric guitar mimicking chicken clucks got the dancers a-wigglin' and the Southern-prepared fowl was distributed among the stage invitees. Soon the fried chicken that I had just seen so calmly on my phone was flying through the darkened venue. In past shows, I was agile enough to evade the crispy projectiles. I wasn't as lucky this time. A young lady in full zombie makeup (it was a Halloween show) was dancing alongside Mary Huff. Keeping time with Mary's hip sways, the zombie girl was winging chicken parts into the crowd with the velocity of Nolan Ryan. People were flinching and cowering with true fear for their well-being — myself included. Suddenly, my right shoulder exploded in a hot burst of a secret blend of eleven herbs and spices. I've been hit! I thought of myself as a young GI shivering in a foxhole as enemy ammunition whizzed above my head. A large, semi-transparent sheen of grease spread across the sleeve of my white shirt, accented by a few stray crumbs of fat-browned flour. The culprit lay at my feet on the beer-soaked floor — twisted and limp, missing a few thin lines of cooked skin. Immediately, I thought I had had a target on me with instructions to "Aim for the vegetarian!"

I cleaned my shirt off with a foil-wrapped WetNap I had in my jacket pocket. I laughed at the absurdity of the situation and took it in stride. I had seen Southern Culture on the Skids before, but this time I was just unable to dodge the pullet.

www.joshpincusiscrying.com
Posted by josh pincus is crying at 10:43 AM