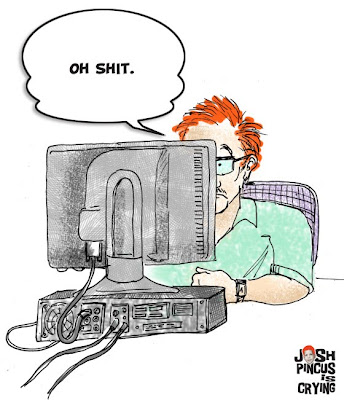 In January, a coworker (the woman who creates all deliverables electronic* and maintains the company website) reported that she was expecting — as in "a baby". Of course, everyone in the department was happy for her. A week or so after the initial springing of the joyous news, it was understood that I, as her regular back-up for days off and vacations, would be taking over her responsibilities when she goes out on maternity leave. I, as the resident graphic designer with a smattering of HTML and web experience, was the logical choice. So, in the coming months, some time was set aside each week for me to sit with — we'll call her "Jane", because that's her name — Jane, while she instructed me in the "ins and outs" of the tedium and minutiae that is a sprawling and cumbersome company website. I feverishly scribbled incomprehensible notes that I knew, months down the road, I'd never be able to decipher. Page upon page of my legal pad were filled with a secret code of carats and dashes and chevrons and brackets, as Jane expounded on the wonders of tags and file hierarchy.

Suddenly, as a precaution, Jane, although still able to work, was confined to bed rest for the remainder of her pregnancy. She was able to work from home and, however awkward, we were able to continue my training over the phone. Then one day, two weeks ago, I received the email I had dreaded. Jane announced that she was entering the hospital for the purpose of inducing her labor. It was sink-or-swim time for ol' Josh Pincus. I was flying solo, brother. I was fucked.

My first full week on my own went pretty well. In addition to my own work, I completed those assignments originally meant for Jane. I created projects based on templates that Jane had previously set up. I repeatedly referred to my illegible notes. (They turned out to be pretty helpful. I wished I had taken notes like those in high school.) As Friday approached, my head reeled, but my work dwindled to a manageable amount.

On Monday, it was more of the same. I edited pages, changing a number here or a phrase there. I created emailed invitations and entered additions to staff biographies. This afternoon, I was creating a routine page for a specific event. I carefully followed my step-by-step directions, checking and double-checking each operation with every new step. I clicked the big “upload” button and, a few “ERROR” messages later, the company’s intranet ceased to function. I stared in disbelief as my computer’s screen stared blankly back at me. "Internet Explorer cannot display that page" was the message displayed each time I meticulously entered and re-entered the intranet’s URL. I pulled my cell phone from my pocket and, although I was reluctant (and actually forbidden), I sent a text to Jane. It read “Uh oh. Please call me.”  What seemed like a lifetime later, but was only five or so minutes, my phone rang signifying Cavalry Jane coming to my rescue. She was kind and sympathetic. She coolly asked, “Ugh! What did you do?”  I explained every move I made. Every click, every keystroke, every message received and a timeline for all. Jane accessed the company’s network from home and was able to mirror the programs I was using. After a few exasperated moans and groans, she told me to call the company IT department. She determined it was most likely an internal server problem and it happened — coincidentally — at the same time I was making intranet edits. And best of all, it was not my fault. I emitted a huge sigh of relief.

Oh, I asked about the baby. I’m not a total asshole.

*how's THAT for corporate jargon
Posted by josh pincus is crying at 12:36 PM