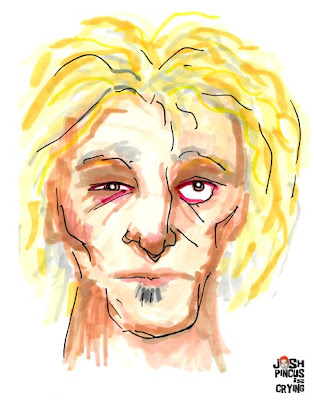 I collect autographed photos of celebrities. Before you get all impressed, I specifically focus on celebrities of the, shall we say, "washed-up" variety. For nearly twenty years, I have attended various sizes of so-called collector shows, where dealers gather at a contracted hotel conference room and display their treasured wares for curious hunters and collectors of post-war pop culture. In the more recent days of post-eBay, many of these regular shows have disappeared. The few that remain have had to resort to extremes to make attending more appealing to potential patrons. A few shrewd show organizers began touting appearances by actors whose careers had waned in the eyes of a fickle public. These performers swallow their pride and sit in an area separate from the vendors behind a folding table stockpiled with 8 x 10 glossy photos of themselves at the pinnacle of their popularity and others from lesser, sometimes unfamiliar, productions made when their demand was on the decline. For a reasonable fee (that has lopsidedly escalated over the years), a fan can awkwardly reminisce with a childhood idol and walk away with a personalized souvenir of the encounter.

I have well over one hundred photographs in a collection that boasts the likes of such luminaries as Lisa Loring (Wednesday from the TV series The Addams Family), Larry Mathews (Ritchie Petrie on The Dick Van Dyke Show) and the lovely Erin Murphy (little Tabitha from Bewitched). Most of the celebrities are pleasant and cordial with a few being extra friendly and engaging. Some are totally devoid of personality. While others are are downright assholes, behaving as though this whole scenario is beneath them and Hollywood will be knocking on their door any minute after a thirty-five year absence.

One show, in particular, that I attend regularly is the twice-yearly Monster Mania in Cherry Hill, New Jersey. I look forward to this show for several reasons. I get to see my friends and fellow artists Matt and Will and we have a blast marvelling at the plethora of horror-related memorabilia on display. But, this show is also one of the few remaining shows to offer face-to-face time with forgotten stars of recent and not-so-recent filmed entertainment.

Usually Monster Mania advertises one celebrity appearance that is "the deal breaker" and this year was no exception. Upon reading the list of scheduled guests, I, along with my son E., Matt and Will, were absolutely psyched to meet the one and only William Katt, star of Carrie and, most importantly, The Greatest American Hero, the single greatest television program since Paul Nipkow began messing around with the transmission of moving pictures in 1884. (Maybe.)

We entered one of two conference rooms whose walls were lined with tables at which celebrities of varying levels of fame were seated. Some were conversing with fans while others, gathering no interest in their presence, stared off into space. Standing adjacent to a table at which L.A. Law star Corbin Bernsen entertained questions from a young couple, was Mr. William Katt, busily covering up his stacks of photos with a dark tablecloth. My friends and I approached Mr. Katt and asked if he was leaving for the day. He replied in the negative, explaining that he was scheduled to participate in a "Q & A" session for the next hour. He thanked us for stopping by and sincerely requested that we return in sixty minutes. We, of course, obliged.

We killed time perusing the dealer room, gawking at some of the other celebrities (like Eric Roberts and wacko deluxe Gary Busey) and catching up with the events in each other's lives (Will informed me he had lost his job the day before). The hour had flown by and we headed back to seriously commune with Carrie White's prom date. Sure enough, there was William Katt, now uncovering the photographic chronicle of his career. He was moving rather like he was in slow motion, but we thought nothing of it. I got in line behind a guy who already gripped an accumulation of pictures in his hand. My son stood next to me while Matt and Will queued up behind us. When our turn arrived, I approached the table where a droopy-eyed William Katt sat motionless behind. I told him I was a fan of his 1980s TV show and selected a photo of him in full costume to be inscribed. He picked up a Sharpie and wrote "Believe it or not! Thanks- William Katt" across the bottom of the photo — a reference, of course, to the show's iconic theme song. I passed a twenty into his waiting palm and he handed me the pic. Matt, who was on the fence over whether or not to drop twenty bucks on another autograph, was overwhelmingly convinced once he saw Katt's clever inscription. Matt stepped forward, chose a photo, mentioned something about the horror film "House", another of Katt's roles, and waited for Katt to begin writing. Katt sat, slightly rocking from side to side, the whites of his eyes slowly becoming obscured by his heavy eyelids. He held the Sharpie a good three inches above the photo and made circles in the air, the pen point never connecting to any writing surface. We all exchanged glances with each other, confirming that we were all witness to the same thing. Mr. Katt remained in this state for — no exaggeration — three minutes, at which time, Matt leaned into my ear and whispered, "He is sooooo fucking baked!" Finally, after regaining brain synapse and divining a clever sentiment, the pen met the glossy photograph and he wrote "Thanks for coming. William Katt". He put his hand out for payment from a now-disappointed Matt and he gently blew the fresh ink dry. "You guys want a picture?," William asked, slurring his words and staggering to his feet. We arranged ourselves in a standard pose and, as Will raised his iPhone to snap the shot, William rearranged us to a pose more to his liking. Will quickly took the picture, thanked Mr. Katt and made our way from his table. Almost simultaneously, E., Matt, Will and myself said "What the fuck was that?" "I'll tell you what that was," offered Matt, "he was totally fucked up."

Now I know the real power behind getting that suit to fly.
Posted by josh pincus is crying at 12:44 PM