tears of a clown

I've seen a lot of concerts and I've seen a lot of opening acts. I saw Kenny Loggins open up for Fleetwood Mac. I saw Duran Duran appear as the opener for a five-band, all-day festival. I saw Uriah Heep warm up the crowd for Jethro Tull (see how old I am?) I have also seen my share of unusual opening acts. In 1978, Elton John had a comedian open his show. I saw Tony Bennett's daughter warble out a couple of songs as preparation (and I suppose to form a greater appreciation) for her headlining father. But when it comes to really unusual opening acts, none compare to the ones lined up by Mark Everett.

Everett, who answers to the mysterious moniker "E.," fronts the eclectic band eels (spelled with a lowercase "e"). eels released their debut in 1996, following a couple of solo efforts under the name "A Man Called E." The band's (mostly Mr. Everett and a rotating group of players) songs offer a mix of pop melodies and melancholy, often painful, lyrics. So, with such a wide range of combined emotions, not just any opening act will do for their live shows.

The first time I saw eels, they performed at Philadelphia's First Unitarian Church. The church, which still holds regular worship services, offers its facilities to a local concert promoter. As anxious fans sat in the pews waiting for the music to begin, a large white bed sheet was lowered in front of the pulpit and a public television-style documentary about Mark Everett's father* was shown — uninterrupted — for the next hour. Needless to say, the crowd was bewildered and a little less than receptive.

For another tour, a rapper named MC Honky was billed as the opener, in support of his Everett-produced album I Am The Messiah. It is widely believed that MC Honky, in reality, is Everett himself in heavy disguise. Everett has denied this claim.

In 2010, as eels toured in support of their late summer release Tomorrow Morning, a ventriloquist telling corny (and decidedly risqué) jokes took the stage for twenty minutes before the band came out.

Last night, eels brought their current tour to Philadelphia's beautiful World Cafe Live. The lobby posters proclaimed "Puddles Pity Party" as the supporting act. Venue doors opened an hour before showtime and the room filled to capacity within ten minutes. With the house light still burning, the low murmur of the crowd was momentarily silenced as a hulking figure appeared and descended the stairs at the rear of the venue. Standing at well over six feet tall, a pancaked-white clown cut a path through the packed bodies. With a glowing hurricane lantern held at arms length and a large suitcase gripped in the other hand, he made his way to the stage. The lights dimmed and the clown 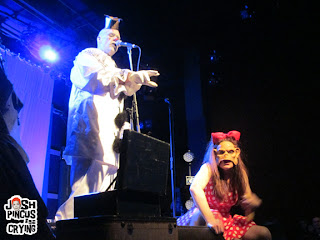 hoisted his considerable bulk onto the stage from out of the crowd. He was dressed in a Pagliacci-style costume of shimmery satin with puffy black buttons down the front. A small bent gold crown was perched on his bald pate, held in place by a thin length of elastic encircling his skull. The crown was inscribed on the front with a large, hand-drawn capital "P." He deposited his suitcase and lantern on the stage floor and silently surveyed the crowd. Then, accompanied by the strains of a pre-recorded orchestra, the clown began to sing. The snickering crowd was immediately stunned and captivated by the rich, operatic tones emerging from his black lip-sticked mouth. His powerful voice and the gut-wrenching lyrics held the audience in bewilderment for a full three minutes. At the song's conclusion, the audience erupted in approving cheers. He produced a smaller suitcase from the original and placed it on top of the first one. From that one, he removed a comically large plastic flower and began the Leiber-Stoller tearjerker "I Who Have Nothing." Once again, the audience was perplexed by the dichotomy of this clown-suited vocalist. Suddenly, another figure moved in shadows of the darkened stage. An obviously female figure in a frilly dress maneuvered her way through the instruments and microphone stands on the pre-set performance area. The clown kept singing. The figure stepped into the spotlight. It was a girl, alright — but she was wearing a grotesque rubber chimpanzee mask and clutched a bunch of bananas in her curled fist. And the clown kept singing. The girl hunkered down simian-style and peeled a banana, tossing the peels into the crowd. Producing a third, smaller suitcase from the second one, the clown burst into "The Love Theme from Titanic (My Heart Will Go On)." His majestic voice soared. It was beautiful, despite being accompanied by a girl in a monkey mask. He ended his set with "Cry Cry Cry," during which he tossed sheet after sheet of Kleenex into the crowd after dabbing his non-existent tears. The Monkey Girl fondled a large inflatable banana which she had exchanged for her real ones. At the song's conclusion, the clown climbed off the stage and exited through the dumbstruck crowd.

My son turned to me and said, "I guess it's not good enough to just have a good voice."