everyone's gone to the movies, now we're alone at last 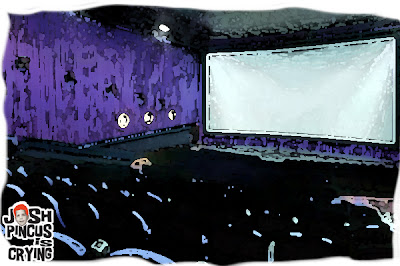 I love movies, I just hate going to the movies. It's not because of the expense – and don't get me wrong, it is indeed expensive – it's because of people. People have ruined the movie-going experience.

Mrs. Pincus and I went to the movies twice this week. Twice! In the same week! Two consecutive days, as a matter of fact! Before that, the last time we went to the movies was nearly two years ago. And I know what kept us away. People. People who don't know how to behave. I'm not talking about children (although I will in a minute). I'm referring to adults. Adults who don't know the proper way to behave as a member of society.

My wife loves Superman. All things Superman. She read Superman comics as a kid. She watched the campy TV series starring poor, pigeon-holed George Reeves. She loves the big-screen film series, featuring hunky Christopher Reeve, that made us believe a man could fly. She was an avid fan of the revival series Lois and Clark, starring Teri Hatcher and Dean Cain, despite Mr. Cain's weird pronunciation of "Shooperman," when referring to his character's name. She even enjoyed the ill-conceived 2006 Superman Returns, featuring an embarrassed Kevin Spacey and a wooden Brandon Routh. So, when word came out that a high-tech big-budget reboot of the Superman story was hitting theaters in the Summer of 2013, it was understood that my spouse and I would be there – front and center. After raking in a whopping 42 million dollars, Man of Steel looked promising – even for someone who is not particularly a "superhero movie" fan... like me.

I arrived home from work around 5:30 on Wednesday. We picked an early evening, mid-week show in hopes of a small audience for a movie that had been released two weeks earlier. We found a parking space at the theater pretty quickly. That offered encouragement of a light crowd. We bought our tickets (eleven and a half bucks each!) and entered auditorium number 22 of 24. The place was fairly empty with a few popcorn-munching families and couples scattered throughout the high-backed, stadium-style seats and focused on the pre-show commercials flickering on the screen. We selected a pair of seats in the last row (so as not to get repeatedly kicked by a nervous patron with Restless Leg Syndrome, as past experience has taught us), just under the projection window. At the end of the row in front of us, was Dad and Little Billy. Little Billy was conducting some sort of pre-movie, under-seat inspection in random rows. Then, he began running up and down the steep access aisles that flanked the middle section of seats. Then, he knocked over his giant bucket of popcorn. Suddenly, Dad – who up until now was totally motionless – sprang up and jogged down a side aisle, soon returning with a replacement container of popcorn. Little Billy continued his activity until the lights dimmed.

In between the trailers for upcoming films, the screen was awash in lighthearted but firm warnings prohibiting cellphone use during the movie. The message was clear – no calls, no texting. At least, it was clear to me and Mrs. P. Despite the sentiment being repeated numerous times, several members of the audience felt that they were somehow exempt from this admonition.

The movie began and so did the conversation. At regular volume, as though people were in their living rooms viewing an On-Demand selection from Netfilx, able to be paused at will. Other conversations took place on the aforementioned cellphones to parties not able to join us at this evening's feature. Then, Little Billy took this time to engage an uninterested Dad in a lengthy "Question and Answer" session. Little Billy proposed his queries from several feet away, since the fact that a film was being shown to other paying customers wasn't a hindrance to his up-and-down-the-steps workout.

"Who's that guy?" "Where's Superman?" "What are they doing?" all came from Little Billy, at top volume and in rapid-fire succession, in addition to the out-of-context "What's the lady's name on True Blood?" and a few more non-sequiturs.

"This," I cautiously whispered to my wife, " is why I hate going to the movies." And then I added, "And why I hate people."

On Thursday, we were invited to a special advance screening of the new film The Lone Ranger, the highly-touted Western epic boasting the re-teaming of director Gore Verbinski and the irrepressible Johnny Depp, trying to reignite the magic and success they brought to the Pirates of the Caribbean franchise. When we arrived at the theater, the specially-hired security staff announced that cellphones and other similar electronic devices were strictly verboten and should either be returned to your car or checked at the door. Patrons were additionally "wanded" to flush out anyone who wasn't forthright in their answer to the "any cellphones tonight?" question.

Once seated (again, in our usual last-row, "no kicking zone" spot), Mrs. P and I talked quietly as the theater filled up. A man in his fifties, accompanied by a much older man, took a pair of seats to my left, leaving a courtesy buffer seat between us. The older man, in ill-fitting shorts, his bony knees noticeably adorned with an abundance of wrinkled Band-Aids, began a loud speech about the previous night's Phillies game. Okay. The lights were still on and the movie hadn't started (and the Phillies are pretty disheartening right now), but he was only talking to the man next to him and his voice could easily be heard by those on the other side of the room. He picked at and rubbed the bandages absentmindedly as he spoke.

A member of the security staff addressed the crowd and repeated the warning about errant cellphones. He mildly threatened to remove anyone who produces one during the film. Then, the room slowly lost its lighting and the film began.

The old man said, "Here we go!" and chuckled.

The dark screen was startlingly illuminated by the familiar Disney castle logo.

Suddenly, the bandage-kneed old man next to me muttered, "Hmm! Walt Disney! It's a Walt Disney movie!"

In the darkness, my eyes met Mrs. P's eyes and we rolled them in exasperated unison.

A title card opened the film. It read "San Francisco."

A sepia-toned scene of a fairground came into focus, with crowds bustling in and out of Ferris wheels and balloon vendors. Small boys in cowboy hats shuffled and danced along the winding dirt paths.

The old man said, "There's the Lone Ranger right there!" and he chuckled again.

My "SHHHHHH"s fell on deaf ears, as the screen presented a close-up of a massive buffalo and the old man announced, as a service to all within earshot, "Buffalo."

"You gotta be fucking kidding me!," I thought, "Is this asshole gonna narrate the whole fucking picture to me?"

The Lone Ranger clocks in at a hair under two and a half hours. The old man possibly fell asleep (or perhaps died) during its run, because the commentary eventually ceased. Though, towards the film's climax, he chimed in with a "silver bullet" remark and promptly dozed off again.

I am astonished by the behavior of adults. I am astounded by blatant acts of impoliteness, disrespect for other people's feelings and total disregard for rules. I am reminded of a line from Bob Goldthwait's (yes, that Bob Goldthwait!) brilliant, if ham-fisted, film God Bless America, a biting, astute commentary on current trends in society: "Why have a civilization anymore if we no longer are interested in being civilized?"

See, you can learn from movies – if you would only shut up.

www.joshpincusiscrying.com
Posted by josh pincus is crying at 3:08 PM