go and fetch the captain's log and tear the pages out 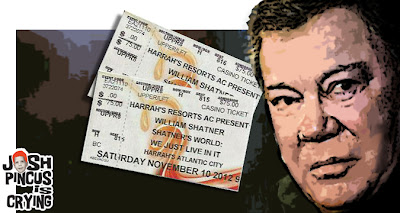 William Shatner is the greatest actor that ever took the stage or stood before a camera. If you don't believe me, you can ask him.

In 1966, Gene Roddenberry was asked to recast the pilot of a science fiction series he proposed to NBC. Dumping the poorly-received Jeffrey Hunter, Roddenberry recruited a young actor named William Shatner to play the charismatic leader Captain James T. Kirk. Shatner, the veteran of many small stage productions, a handful of anthology TV series and the former "Ranger Bob" on the Canadian version of The Howdy Doody Show, jumped at the role. NBC approved of the recast and Star Trek, as a series, went into production. After 79 episodes with disappointingly low ratings, Star Trek was canceled, despite a rabid letter-writing campaign by fans. NBC issued this announcement: "You Star Trek fans have fought the 'good fight,' but the show has been canceled and there's nothing to be done now." The regular cast went their separate ways.

Years later, Star Trek was recognized as a ground-breaking series, in spite of its low-budget production and sub-par acting. The cast of the original series went on, in true Bob Denver/Gilligan's Island fashion, to milk those characters for all they were worth. And leading the pack was William Shatner. Shatner was given roles based on the novelty of William Shatner. It was a joke. A goof, with everyone in on it but Shatner. Instead, Shatner  — perceiving himself as the revered thespian, stumbled through a post-Star Trek career of B-grade movies (remember Kingdom of the Spiders or Incubus, a full-length movie with dialogue entirely in Esperanto?), TV guest appearances usually including a "Captain Kirk wink-wink" reference, and the occasional (embarrassing) musical foray. Sure, he was successful at all of his various endeavors, but so was Ted Bundy. His subsequent long-running series were strong, but they were no doubt conceived as "Let's see Captain Kirk as a cop!" and "Let's see Captain Kirk as a lawyer!"

Last night, my wife and I subjected ourselves to went to see the local stop on Shatner's current one-man career retrospective Shatner's World: We Just Live in It on its multi-city tour. The performance, at the main showroom at Harrah's Casino in Atlantic City, came one week after the New Jersey community suffered heavy loss and damage as a result of Hurricane Sandy. Shatner was scheduled for two performances at Harrah's, but the Friday evening show was canceled. Not because of the hurricane, but due to lack of ticket sales. (Luckily, our tickets were complimentary and yes, that's a $75.00 face value per seat.)

After dinner, we arrived as the doors opened one hour prior to curtain. The place was empty and as it grew nearer to showtime, the theater was not filling up too quickly. Soon, the lights dimmed and Shatner's voice announced himself as he bounded out to the stage to the strains of the Star Trek theme (what else?). The set was sparse. A large screen showed a starry sky and two tables and chairs stood at either end of the stage. We sat back and witnessed two hours of self-indulgence that could have just as easily been presented in an empty venue with the same results from the performer. Shatner, who is by no means a comedian, stumbled and stammered through a mish-mash of meandering soliloquies, most culminating in a payoff not worth the wait. He lost his train of thought several times during each anecdote and several times tripped over the punchlines. Many of his tales were pointless nonsequiters, told purely for his own amusement. He related a story of purchasing a horse, punctuating it with loud bursts of bravado acting. I don't even remember the point of the story. Next, touching on the humble beginnings of his acting career, he told of a famous incident in which he shared the stage with actor Lon Chaney Jr. During a performance on live television, a drunken Chaney — thinking it was still a rehearsal — muttered to himself about not breaking props and saving them for the live show. The panicked director couldn't convey the fact that this was the live show, and the result was unintentionally hilarious. (This exhibition is recounted here and is available to watch here.) Curiously, the teleplay does not include Shatner. The 1952 anthology series Tales of Tomorrow, during which the incident took place, never featured Shatner. His inclusion in the story happened in his imagination.

Shatner's World also featured many film clips including an interview with Patrick Stewart, star of Star Trek: The Next Generation. Stewart, a classically trained and respected actor said, "If I were to die tomorrow, I'd be happy and honored to only be remembered as Captain Picard." The statement was delivered in a truly heartfelt and humbled manner. Stewart is a better actor than Shatner, so his comment was either convincingly scripted or genuine. Shatner put on his hack-actor face and replied, "I feel the same way." His reply dripped with ostentatious bullshit.

Over the course of any show, I have never seen more patrons get up and walk out. At one point, I counted ten people at one time making a mass exodus.

Bottom line: Shatner is a blowhard. He is full of himself and way more impressed by his accomplishments that anyone else. He is an overacting ham with very limited range who lucked into an iconic show nearly six decades ago. Over the years, his co-stars have voiced their dislike for Shatner, including actor George Takei who, on a Comedy Central roast of Shatner, screamed, "Fuck you and the horse you rode in on!"

You said it, Sulu.

www.joshpincusiscrying.com
Posted by josh pincus is crying at 1:54 PM